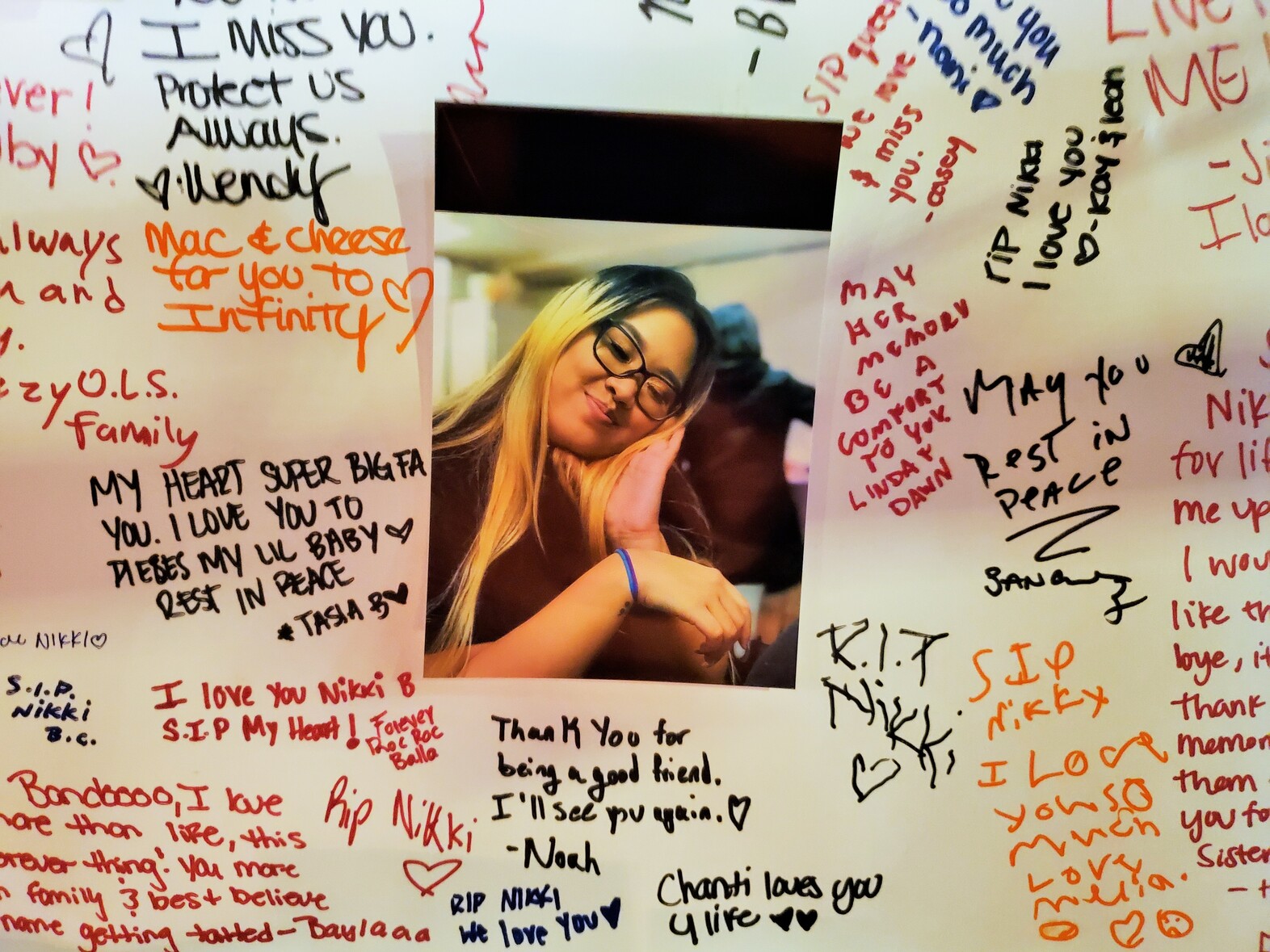 A photo of Nikki Huang at a memorial to her outside her family's restaurant on Grand Street. (Photo by The Village Sun)

BY LINCOLN ANDERSON | Two young East Siders were killed in a brutal, gang-related double homicide on May 16, police said.

The bodies of Nikki Huang and Jesse Parrilla, both 22 years old, were found inside a torched car parked at 870 Shore Road near a quiet golf course in the Bronx at 4 a.m. that day.

They had been shot in the head and body. News reports said, after they were killed, the two had been “burned beyond recognition.”

Huang both lived and worked on the Lower East Side. She resided in the Hillman Housing Co-op at the east end of Grand Street near the foot of the Williamsburg Bridge. She worked just two blocks away at her family’s Chinese restaurant, Wa Lung Kitchen, at 553 Grand St. Her mother also owns another business, Nails by Nikki, at 515 Grand St., a block to the west of the restaurant.

Parrilla lived with his mother in a six-story tenement on E. 12th St., between First Avenue and Avenue A. He played one year of basketball Upstate at Genesee Community College. A 6-foot-tall guard, he averaged 4.6 points per game and shot 36 percent from three-point range, but eventually came to realize he wasn’t good enough to make the pros.

Two Saturday nights ago, a couple of Huang’s friends were using a barbecue lighter to keep a mass of tall votive candles lit at a sidewalk memorial to their friend outside the restaurant. One of them, who said she used to work there, advised that no one, including Huang’s family, wanted to talk to the press.

Although the restaurant’s storefront gate was pulled halfway down and there was no walk-in business that evening, it appeared the place was still open for delivery orders. A chef in a white paper cap came out briefly and stood near some deliveristas. Asked for comment, the chef nodded toward one of the bike delivery workers, who gave his name as “Eduardo” but did not appear to speak much English. The chef went back inside, followed soon after by the delivery guy, who emerged carrying an order in a white plastic bag and biked off.

Photos in the memorial showed a smiling Huang, the lower half of her long black hair bleached blonde — another one showed it fully blonde — posing for selfies with friends. Written on a teddy bear’s fur was “NEVER 4-GET” and “S.I.P. NIKKI,” for “sleep in peace” or “stay in peace.” Magic markers were left so people could pen farewell notes.

According to reports, the two young friends were victims of ongoing bad blood between the Down the Hill Gang, which operates in the East Village, and the Up the Hill Gang, whose turf is the Lower East Side — a rivalry that was inflamed after Huang’s purse was stolen.

On Sun., May 15, Huang reportedly was mugged of her purse, containing cash and credit cards, by a Down the Hill Gang member outside a Lower East Side housing complex. Instead of alerting police, the story is that Huang told friends of hers in the other gang about it.

That was quickly followed by an escalating series of retaliatory shootings. Later that same day, around 11 p.m., Brandon Atkinson, 39, was fatally shot in the head at the corner of E. Third Street and Avenue D. The Post described the victim as “a reputed member of the Down the Hill gang,” though added it wasn’t clear if he was the purse thief.

Then, just two hours after the Avenue D murder, two Up the Hill Gang members were shot and wounded on Pike Street in the Two Bridges area, the Post reported.

The following night, Monday, Parrilla was giving Huang a ride home in his mother’s car, according to his mother, the Daily News reported. However, the two friends somehow wound up kidnapped by Down the Hill Gang members.

Before they were slain that night, a male friend of Huang’s would also be shot in the face in Queens. The two young East Siders were then driven to the Bronx, where they were executed, after which the car was set ablaze.

Although Huang had friends in the Up the Hill Gang, the Post said that Parrilla was not mixed up in the gang feud and was, according to a police source, just “in the wrong place at the wrong time.”

Huang and Parilla became friends as students attending both P.S. 110 and Tompkins Square Middle School together.

The Post reported that the gangs are “second generation.” A source, who requested anonymity, confirmed that the two gangs have been around for decades.

“What’s difficult is that most of these people are all loosely connected by family, friends,” the source told The Village Sun. “This is crazy tragic.”

He explained that “The Hill” is a wide swath of area covering from north of Grand Street down to the Al Smith Houses near the Brooklyn Bridge. He said he heard the conflict between the gangs is “over more than a stolen purse,” calling it instead “a major beef” between gang members from the Baruch Houses and The Hill.

The bloodletting came just two weeks after an anti-gun march through the Lower East Side and East Village, at which speakers called for an end to senseless violence.