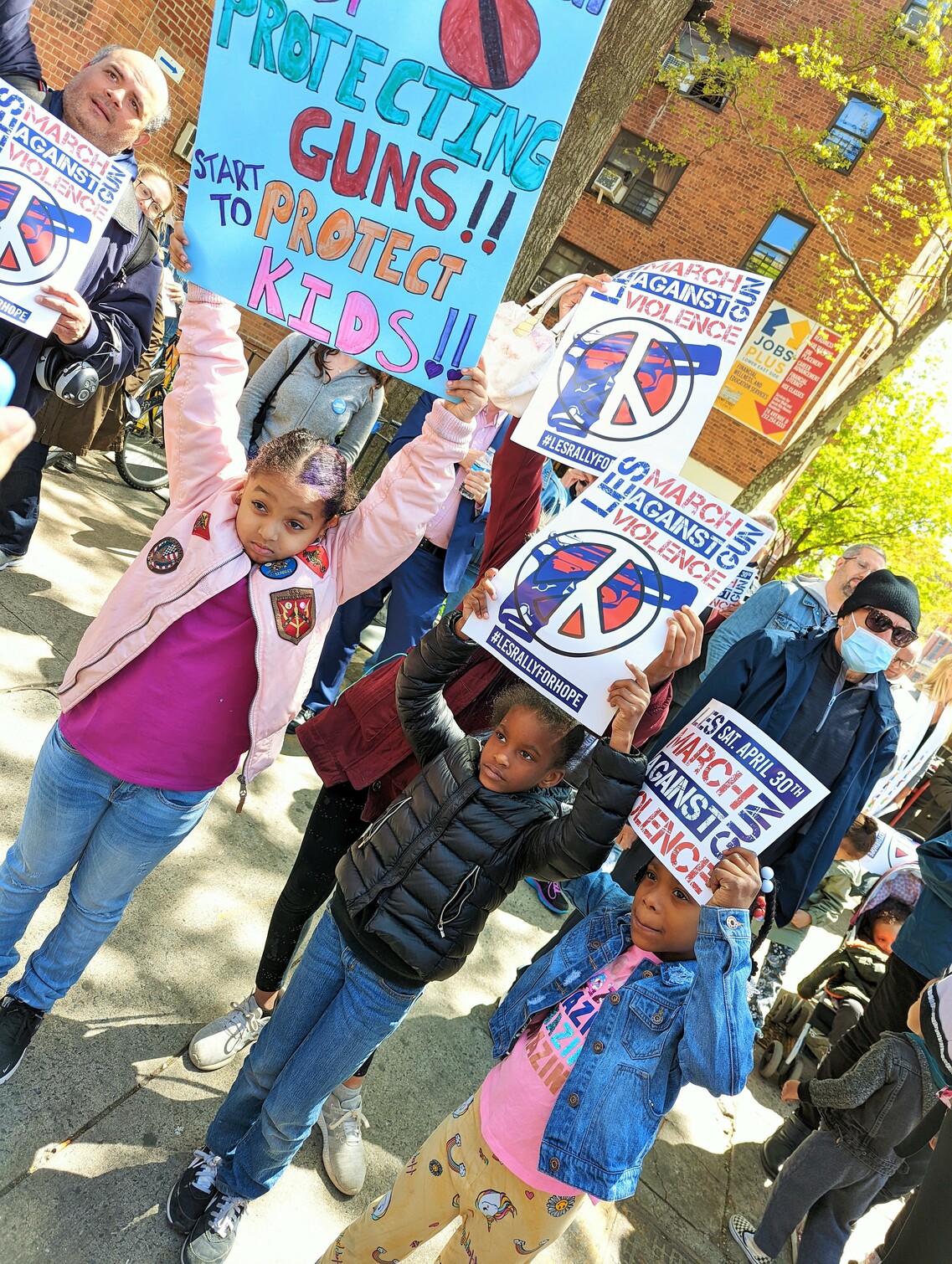 The anti-gun marchers were all ages. (Photo by Frank Gonzalez)

BY JULIET CAMA | On April 30, community members from throughout the East Village and Lower East Side came together to say no to guns at the LES March Against Gun Violence.

The march was intended as an outlet for participants to grieve the loss of life and remember places of hope and solidarity within the community.

An initial call from the 9th Precinct to Abounding Grace Ministries spurred the march to confront the reality of violence and the desire for people to stand together against it.

Within weeks, more than 200 people of all ages and ethnicities met at Delancey and Columbia Streets, where the march kicked off. They then walked up Columbia Street to Avenue D.

They stopped at E. Third St., as marchers reflected on the overwhelming problem of violence and remembered those who are grieving because of its effects.

The anti-gun rally concluded at E. 11th Street at P.S 34. Officers, religious leaders and community members spoke about their experiences throughout the procession as the march culminated with a “Rally for Hope.”

Pastor Louis Carlo (“Pastor Lou”) from Abounding Grace Ministries longs to see unity and peace in the community by building on this event.

“The LES March Against Gun Violence allowed us to move beyond the things that divide us and provided an opportunity to see how we can rally together to be a healthy, loving, whole community,” he told The Village Sun. “We don’t need to tolerate these high levels of violence in our community. We don’t need to let it be the norm.”

Carlo said New Yorkers are encouraged to participate in these rallies to help preserve their communities since, without change, gun violence will continue to have an immense safety impact.

Sadly, two weeks later, on May 15, there would be a fatal shooting of a Bronx man at the very corner the rally had stopped at, E. Third Street and Avenue D. That, in turn, was quickly followed by a young Lower East Side restaurant worker’s death on May 16; the burned bodies of Nikki Huang and a male friend from the Bronx were found in a torched car near a Bronx golf course. Both incidents are said to be tied to an escalating Lower East Side gang war.

The march organizers have decided to stay connected to further address the scourge of senseless violence in the neighborhood and spend time reflecting. They plan to continue to bring the community together to say no to senseless guns and instead to celebrate life and inspire hope.