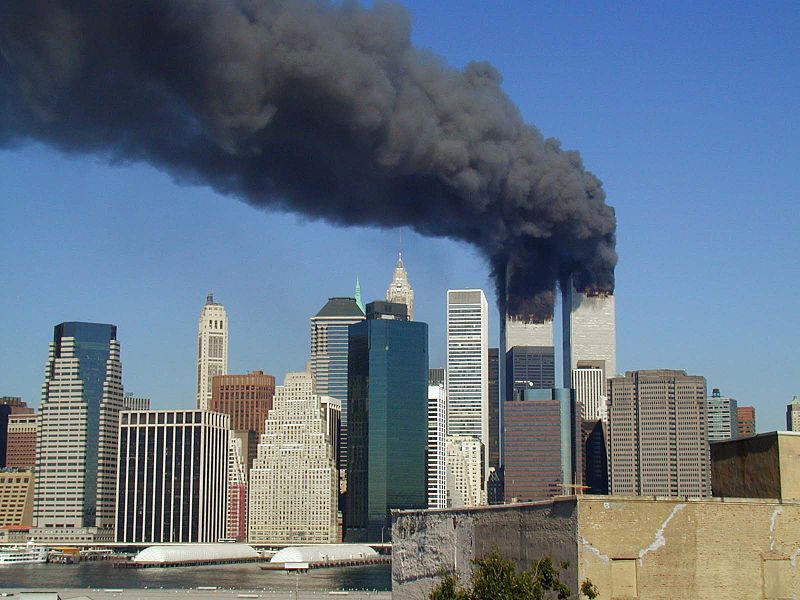 The World Trade Center on fire and smoking before it collapsed on 9/11. (Photo by Michael Foran)

I stood at home plate

as Jeff Hardy was cooking on the mound,

but I never sat before a plate of his food,

never advised him to take that head chef job

up on the hundred and first floor.

Years before she married and changed her name

I lusted after Debbie Jacobs…

But I never told her to put on United Airlines garb,

or get her throat cut fighting for our country

now striving to be real firemen.

I failed those not up to it,

passed the sweaty, joyous survivors of the ordeal,

helped them out of the heavy gear they wore

in their half hour of hell.

but to those who went on to training

hoping to graduate from the academy

They were a pride I took personally,

as though they were me —

never guessing what their final calling would be.

If I’m glad of anything,

it’s that I ignored the rules as the test was ending,

and, against city regulations, I wrote about it,

of the victorious men in the fifty-pound vests

spilled from my pen.

His head of chestnut hair has been given a bowl cut

and he was wearing an earring in his left ear.”

He is here for a rescheduled test, due to faulty equipment the first time.

He’s about five-five, a hundred and fifty pounds.

One of the strongest and best so far…”

On Nine-Eleven, William Johnston was with Engine 6

from Lower Manhattan, which lost four men, including him,

and Adam Rand came to die with Squad 288 from Queens.