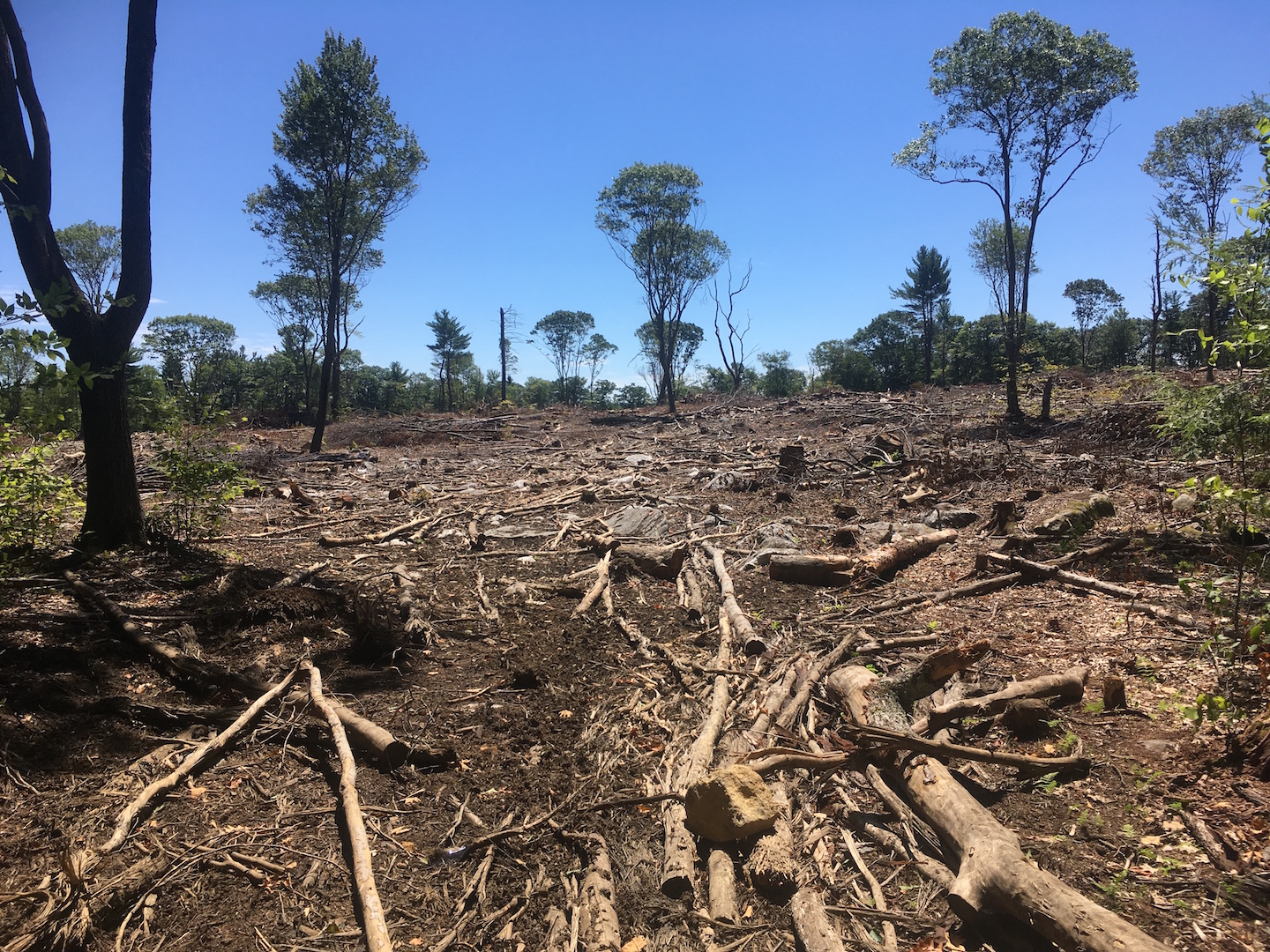 After a clearcutting in 2018 on land owned by Mass Audubon in Sandisfield, Mass. (Photo by Carl Rosenstein)

Yes, Virginia, there is no (green energy) Santa Claus

BY CARL ROSENSTEIN | Remember when you believed in Santa Claus. The “Dear Santa” letter addressed to the North Pole politely requesting a Hot Wheels set, wishing Rudolph & Co. well, Christmas Eve, milk, chocolate chip cookies and a note. You clung to that precious fantasy until age 7, though by 6 you knew it was just a fable.

After viewing “Planet of the Humans,” the powerful new exposé on “green” energy, produced by über liberal Michael Moore, I’ve read and watched the commentary and postings of professional “climate”-worrying fanatics. Their bitter denials express the same pouting sentiments you felt when you realized that Santa Claus is just make-believe, that instant when innocence is pushed beneath the bus of real life.

Hardcore “climate” activists are demanding Moore be canceled, that he is a heretic, a slovenly apostate: “Burn the witch.” Censorship has become the weapon of choice for this Twitter lynch mob, though, “When you tear out a man’s tongue, you are not proving him a liar, you’re only telling the world that you fear what he might say.”

Magical Santa embodies an archetype. He denotes wishes, desires and divinity, making all our dreams come true. The solar-and-wind Santa myth propagated by this generation of corporate, fear-mongering environmentalists, such as Bill McKibben and Al Gore, appeals to this archetypal image that brings us the brilliance of a light-filled home and the belief that better days lie ahead. Exposed by Moore, these mono-cultural, industrial utopians are driven by the real green — the Green Climate Fund — one of many “green” mutual funds. When questioned if he was a “prophet,” Richard Branson chuckles and asks, “Do you mean spelled ‘p-r-o-f-i-t?’”

Moore thoroughly discredits the belief that wind, solar and electric cars can power 10 billion people into a sustainable future. That’s as plausible as Santa and his reindeer making several hundred million special deliveries around the world on Christmas Eve, even with Amazon. The intensive mining for rare earth minerals, dependence upon fossil fuels — including wood (biomass) — and heavy manufacturing needed for these so-called “renewables” can actually use more resources than they produce over their short lifespans. It turns out extracting and burning natural gas is of less consequence to the environment. Ho-ho-ho.

This sect of industrial environmentalists would have you believe that the electricity generated from wind and solar comes from fairy dust and moonbeams. However, the laws of physics command all actions initiate equal reactions. The creation and releasing of any energy forms must have a downside — that’s the nature of causality. There is yin so there is yang. Pick your poison but stop preaching this carbon-neutral Christmas carol.

I have anticipated Moore’s findings for many years. During that time, I’ve witnessed New England’s forested ridge lines blasted away for heavily subsidized industrial wind power; I’ve seen formerly open farmland plastered with solar arrays that can barely power a few homes, and only during the day and not when it’s cloudy.

In my Berkshire cottage on the edge of October Mountain State Forest, I have fought and lost against the Massachusetts Forest “Dis-service” apparatus that has decimated the once-imposing 15,000-acre woodland in a series of horrific and unlawful cuts. The trees from the latest 2,000-acre raping in 2018-19 were bound for Vermont’s tree incinerator in Burlington, McNeil Biomass Inc.

Proponents blithely dismiss the criticism of tree incineration, claiming it is “only 1 percent”of our energy output. In 2017 the U.S. energy economy was more than a TRILLION dollars! One percent of that is $10 BILLION! How many million acres of trees does that equal? Only a brainwashed imbecile can claim that burning trees to power flat-screens is “green” and “renewable.” And I thought that forests sequestered carbon and are essential for biodiversity — how foolish of me to quibble; I must be a nonbeliever, a “climate denier.”

My issue with these eco-industrialists behind this is not just their infatuation with technological salvation, but how they have hijacked the true movement and once-bona fide organizations such as the Nature Conservancy and the Sierra Club. They have socially distanced themselves from the first generation of environmentalists of the 1960s and ’70s, whose focus was not only on clean water, soil and air, but also on a clean Zen mind and the need for the raising of individual and collective consciousness. Ignorance, not carbon, is the root cause of suffering.

In the 1960s, population was a pressing issue when there were already 3 billion of us. “The Population Bomb” was a best seller in 1968. Without addressing this herd of elephants in the room, it is only a matter of time before complete biospheric collapse — with or without additional carbon in the atmosphere. The Earth’s current population of 7.5 billion is already a disaster. I’m glad I’ll be in the next realm when we hit 10 billion.

A sterile brave new world awaits the misguided “climate” millennials unless they refocus their priorities on preserving ecosystems from development, and banning all toxic agricultural herbicides, such as Monsanto’s glyphosate, which is killing the miraculous monarch butterflies, and pesticides, such as neonicotinoids, which are decimating the honeybee colonies. The hunting of wild animals must be banned. Plastics choking the oceans must be cleaned up and the Asian countries responsible for 60 percent globally of mismanaged plastic waste must be held accountable, especially China. These issues have far more urgency than the temperature rising one degree, bah, humbug.

When in doubt, I always return to the masters, and in this instance I reread Beat fellows Jack Kerouac and Gary Snyder to renew my optimism and keep me firmly on the path. Snyder, now 90, was raised in rural Puget Sound and studied Zen for 10 years in Japan. He was a nascent voice in the California “Back to the Earth” environmental movement in the ’60s. “Turtle Island,” his 1974 collection of poems and essays, was awarded a Pulitzer Prize.

Snyder’s humanistic essays deal with matters of the heart that have been clearcut and bulldozed over by today’s corporate environmentalists. Snyder explores the great Chinese, Japanese, Mahayana Buddhist, Native American and Pacific Rim cultures; their identification with the vast natural and spiritual world; the magic of animals and their desperate plight; the importance of connectivity to place, to community and family; and the ultimate search for self in the universe.

Kerouac’s rapture with nature is evident throughout his quest, in “On The Road,” “Big Sur” and especially in “Desolation Angels” and “Dharma Bums,” both set around treks and long stretches of isolation, fire watching atop the Sierras and Cascades.

“When I get to the top of Desolation Peak, and everybody leaves on mules and I’m alone I will come face to face with God or Tathagata and find out once and for all what is the meaning of this existence and suffering and going to and fro in vain.” (“Desolation Angels”)