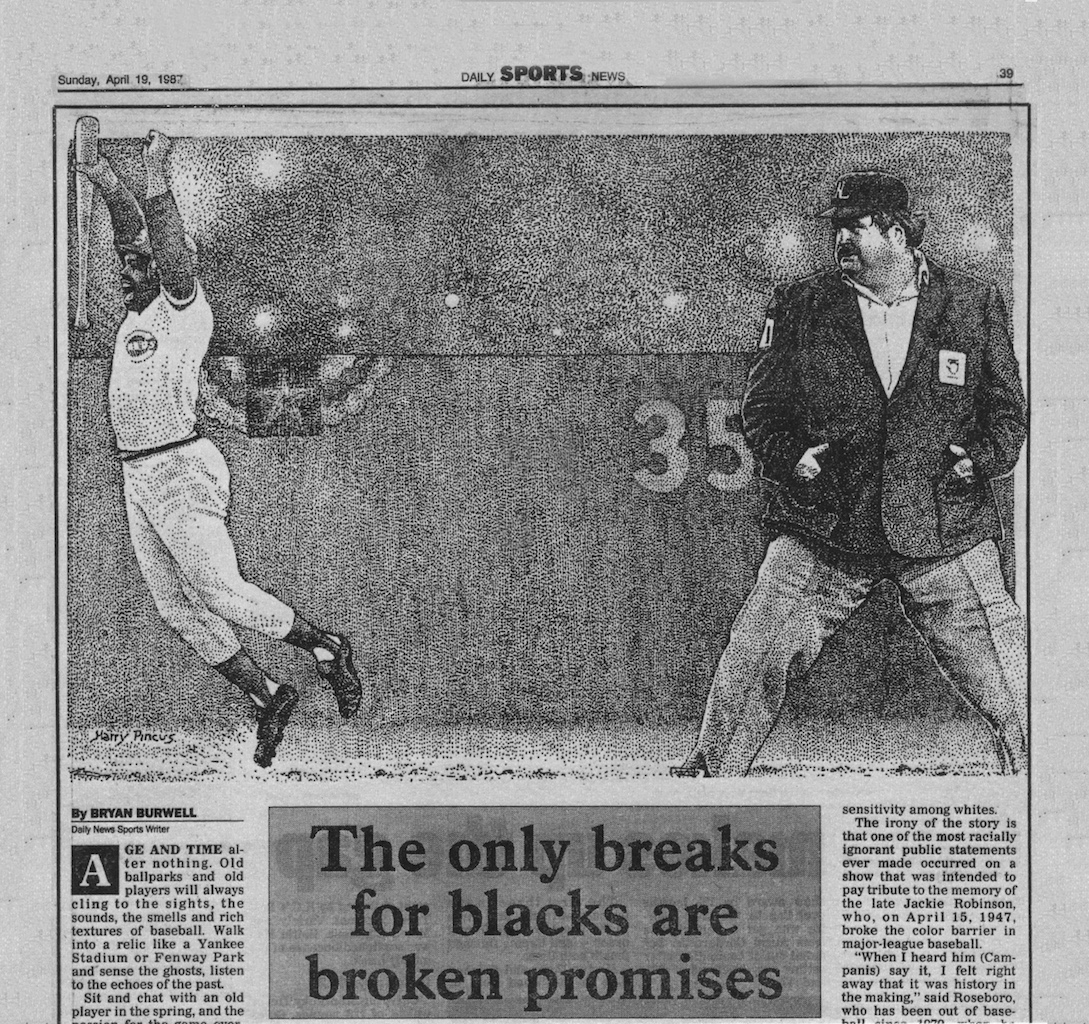 An illustration by Harry Pincus for a Daily News sports article in 1987. (Courtesy the artist)

Ya gotta believe! But please don’t turn the Mets into the Yankees

BY HARRY PINCUS | Steve Cohen, the new owner of the Mets, has asked us fans to send him our suggestions, and although I don’t engage in Twitter, I can’t resist taking him up on his offer.

First of all, thank you, and congratulations, Mr. Cohen. Like many a long-suffering fan, I practically jumped for joy when I heard that you had won out by circumventing our mayor, and obtaining the support of the other billionaires who own baseball teams.

In truth, I’d probably admire you even more if you had tossed out just a billion or two to build housing for the homeless, or schools for our poorest children, or something for those of us who are suffering most. But that said, I’m no better than the next guy, and if you’ll just buy us some first-rate talent, or at least put out the dough to retain our good players, I will be more than appreciative.

The press has been rather unkind to the previous owners, who didn’t, after all, enjoy it when someone Madoff with all of their money! The Wilpons never escaped the wrath of the fans after they were forced to economize. Mr. Wilpon was just a Brooklyn boy, who went to school with Sandy Koufax, and  properly honored Jackie Robinson and the tradition of a working-class team that endeared itself to the whole world.

In other words, Mr. Cohen, please don’t try to turn us into the Yankees! Please refrain from defiling our glorious Mets tradition by putting up a plaque that resembles the Douglas MacArthur quote that the Yankees have to walk beneath on their way to the field of play: “There is no substitute for Victory.” Yech.

There are actually plenty of substitutes for Victory, such as grace and good humor, sportsmanship and that special little karmic miracle that has occasionally made the Mets champions. Be it the black cat on the field in ’69 or the squibbler that went through Buckner’s legs in ’86, sometimes good things happen to good people, and, as Tug McGraw said, “Ya gotta believe.”George Carlin also reminded us that baseball is a peaceful game!

So make no mistake about it, if we see anything at Citi Field about winning from your friend Donald Trump, you will have ruined our sacred trust forever. Just as there is no crying in baseball, please, may there be no Donald Trump in baseball, and no politics! If Keith Hernandez can refrain from touting Trump, so can you.

And by the way, keep the same guys on the microphones until they drop. Keith, Ron Darling and Gary Cohen are the most intelligent and entertaining team of broadcasters I have ever heard, since I came along after Red Barber and Mel Allen. When I listen to the Yankee announcers, or the attention-deficit crowd on Fox Sports, I treasure having the gift of intelligent repartee as afforded by our guys. Even my wife likes listening to them!

As I hear you are a lifelong Mets fan, perhaps none of this is necessary, or needs to be recounted. Hopefully, you already get it.

I just had a sudden worry, when I began to consider what my late father Irving would think. He was socialist subway conductor and lifelong Brooklyn Dodgers fan, who was beside himself after the team quit us for Tinseltown, and practically apoplectic during the one year, 1961, when his 9-year-old son became a Yankee fan. Could I help it if they had Mantle and Maris, and if there was no one else to root for?

My father explained to me that there is no great joy in just buying anything that you want. It’s only really good if you earn it.

For Irving, the perennially superior Yankees were “capitalists” who simply bought their talent. We always hoped for young players who would “develop” and not the best of the best who were purchased each Christmas like baubles from Tiffany’s.

Ebbets Field was right down the street, Empire Boulevard, from P.S. 221, when I began kindergarten in the fall of 1957. The lights had yet to go out on the Boys of Summer, and you could still see the legendary field aglow for the last night games, when Irving finally arose from his torpor  and took me to one of the last Brooklyn Dodgers games! A kid on a bike came up to us and sold my father two tickets “for a buck,” in the second row up from the Dodgers dugout, and I still recall the colors and the beauty of Ebbets Field.

The Wilpons tried to recreate that stadium of red brick arches, and there is a warmth to seeing the number 42 at the entrance to the Jackie Robinson Rotunda. Somehow, it almost moves me to tears to think that I grew up a few blocks away from where baseball broke racism.

The politicians refused to build the Dodgers a new stadium, where the Barclays Center is today, and the Brooklyn Dodgers left us, and pulled all the starch out of Brooklyn. When a new National League team called the Mets came into existence, my father took me to the old Polo Grounds, where we waited outside of the clubhouse, beneath the ancient darkened eaves, to see the actual players after the game.

Here, a rather inebriated Casey Stengel ran right past me, holding hands with another old elf.

“This is my driver,” shouted Casey, as the two of them absconded in a yellow cab.

And it was here that I found myself standing next to a very handsome guy in the nicest gray suit I’d ever seen, who was speaking Spanish to some friends. Someone whispered to me that I was standing beside Roberto Clemente.

My father was so anxious that I adopt the Mets as my religion that he even took me out to Shea Stadium, in the dead of winter, to watch the steel girders go up. Somehow, his allegiance to teams that often lost was magically rewarded, when we attended his only World Series game, in 1986, and watched the miracle of a little white ball squiggle through the aching ankles of Boston’s first baseman, and into history.

So my suggestion, Mr. Cohen is that you honor our common heritage, and not just play to win. Play to be good! And Let’s Go Mets!