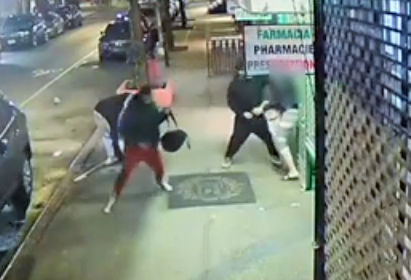 The two muggers each ran off with a bag of the woman's, as seen in a surveillance video released by police. (Courtesy N.Y.P.D.)

Woman, 25, mugged in Soho at knifepoint

BY THE VILLAGE SUN | A young woman walking in Soho early Friday morning was mugged by a pair of robbers, one with a knife. She lost nearly $6,000, mostly in electronics, police said.

According to cops, on March 18 around 3:30 a.m., the victim, 25, was walking in front of 140 Thompson St., between Houston and Prince Streets, when she suddenly found herself sandwiched by two strangers. One came up from in front of her while the other male, who had been trailing her, came from behind.

As one of the pair brandished a large knife, the other guy grabbed the woman’s purse and ran off. The victim was able to throw her other property onto the ground, and the first robber picked it up and also fled. The woman was not injured.

The crooks bolted with her belongings southbound on Thompson Street. The stolen property includes a laptop, a tablet, a cell phone, headphones and other items, altogether with a rough combined value of $5,940

One suspect wore a black sweatsuit, a dark-colored baseball hat with a white Yankees logo on it and a light-colored face mask.