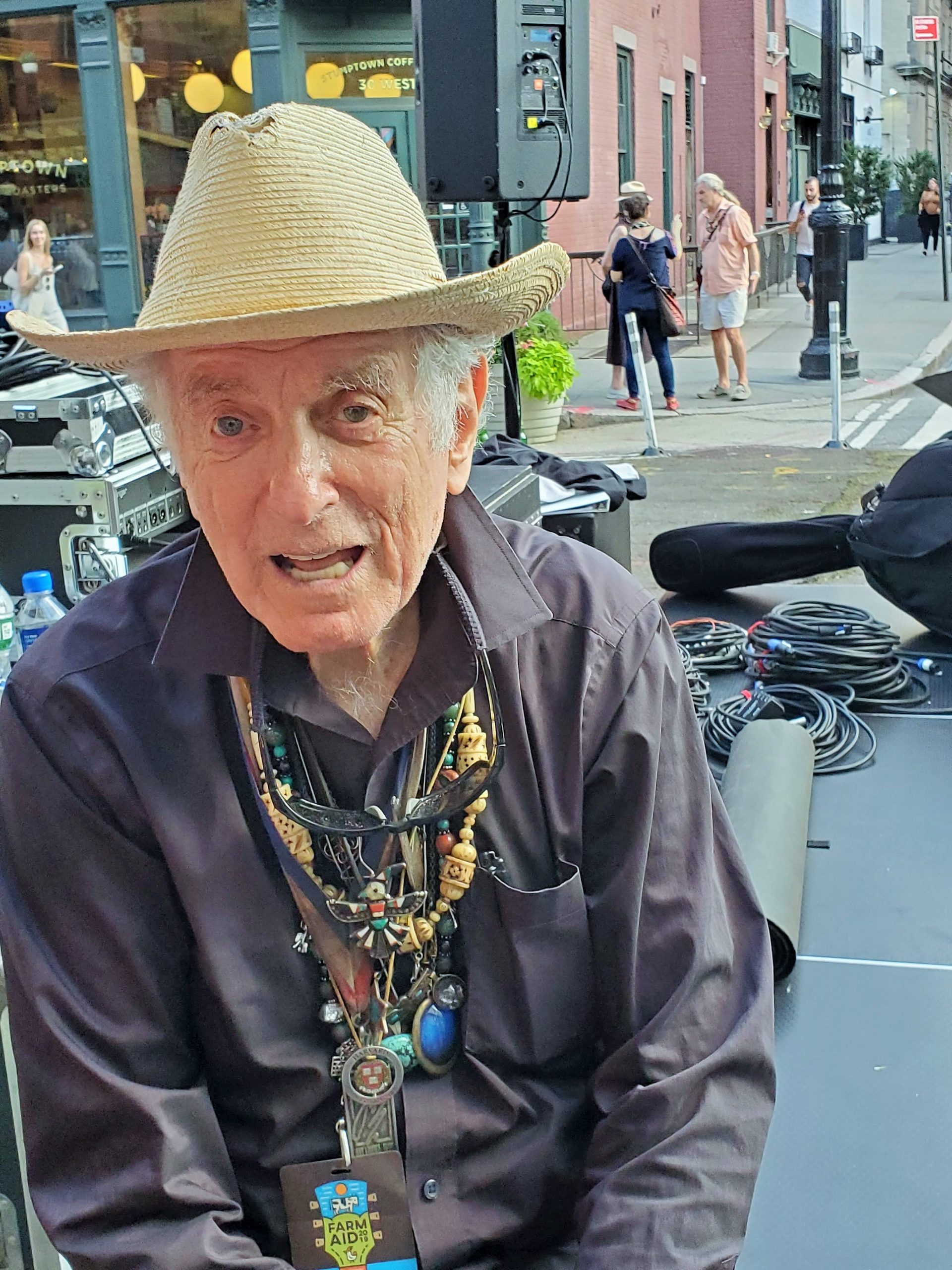 BY THE VILLAGE SUN | With scatting, a mean penny whistle and paeans to the power of creativity, David Amram and his band kicked off The Village Trip Festival in grand fashion on Saturday.

The trip was a little heavy at first as Amram, who turns 91 in November, found himself roasting under the late-summer sun on the stage at Eighth and MacDougal Streets. But a tent was brought in for shade and he regained his cool.

Everybody was on grass at the concert, literally. Instead of the usual astroturf, some real sod was laid down on Eighth Street in front of the stage for people to sit and lounge on.

Along with his grooving band, vocalist Renee Manning and trombonist Earl McIntyre, they performed jazz standards, like “A Train,” “Summertime” and “St. Thomas.” Amram’s jazz chops go way back. He played with the greats. In 1955, he was a member of the Charles Mingus Quintet.

He also did an improvised song, “All of Us Are Now Hip, Thanks to This Village Trip,” with lyrics by him and scatting by Manning.

A multi-instrumentalist, he played the flute on a Lakota round dance he learned from Floyd Red Crow Westerman in the Village in the 1950s.

In addition, Amram performed “Amazing Grace” in honor of his friend Village activist Doris Diether, who died Thursday at age 92 at her Waverly Street home, just a block away from the concert stage.

Amram and his friend writer Jack Kerouac first brought jazz/poetry to the Village in the 1950s. John Ventimigla, who played restaurateur Artie Bucco on “The Sopranos,” read “the children of the American bop night” passage from Kerouac’s novel “On the Road” as Amram and his band riffed in the background.

The actor noted that Saturday would have been “Big Tony” James Gandolfini’s 60th birthday.

A Hungarian poet also read Kerouac as the band accompanied him. In addition to Kerouac, Amram was friends with poet Allen Ginsberg and the rest of the Beats. He did the music and scat lyrics for, and he and Ginsberg appeared in, the improvisational Robert Frank 1959 film “Pull My Daisy,” adapted from Kerouac’s play “Beat Generation.”

Amram also played music he composed for the soundtrack of the 1961 Natalie Wood-Warren Beatty movie “Splendor in the Grass.”

He wrapped up with Phil Ochs’s “When I’m Gone,” which encourages listeners to seize the moment while we’re still here.

In one of his hallmarks, at various points in the show, Amram urged everyone to embrace their inner creativity.

“Every generation, if you feel creative, express it,” he said. “Express it and don’t let anybody’s criticism bother you. Find others who appreciate you. … We’re all born creative until we’re talked out of it. … Just keep on truckin’. Do better than what was expected.” Often the more talented people aren’t the ones getting the accolades, he said, adding, “And most of all, have more fun.”

Amram self-deprecatingly called this his “senior bopper senile wisdom” — but his encouraging and generous words, like his spot-on piano and penny whistle solos, rang true.