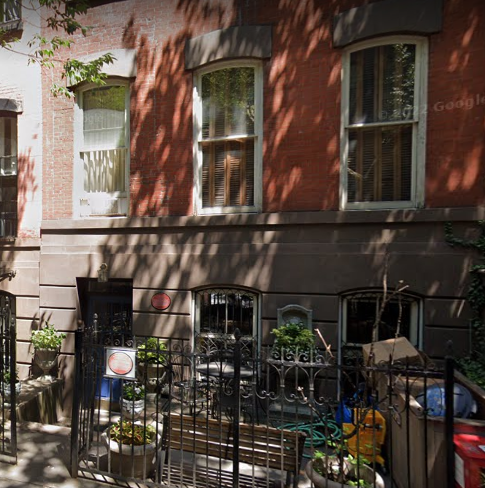 BY LINCOLN ANDERSON | It appears the words of Kim Plosia, the former managing editor of WestView News, were prophetic when she recently described the working conditions at the embattled West Village monthly newspaper.

Plosia, who is now the managing editor of a new breakaway newspaper called New WestView News — though the name reportedly may change for its second issue — told The Village Sun that the atmosphere at WestView News was “a volatile situation.”

On Tuesday afternoon Sixth Precinct police responded to 69 Charles St., the brownstone owned by George Capsis, the 95-year-old publisher of WestView News. Dusty Berke, his caretaker, has also resided there for six years. She just became the paper’s new managing editor in November.

According to a source, who requested anonymity, no fewer than eight officers from the Greenwich Village precinct, including a lieutenant, responded to the scene.

Reportedly two individuals — one of them a visitor to the building — each hurled accusations at the other, and tried to file a complaint against the other. Capsis was not one of them, though apparently was there as the heated clash erupted.

“There was an argument in the premises of George Capsis’s home and nothing availed from it,” the source said.

The police officers, who stayed at the building for around 45 minutes, tried to sort things out. According to the source, ultimately, dueling harassment complaints were filed.

The Citizen app reported that on Tuesday at 1:25 p.m. there was a “person assaulted” at the address. However, while one of the parties may have accused the other of assault, police apparently did not feel there was enough evidence to corroborate that.

Speaking of parties, coincidentally it actually happened to be Capsis’s birthday.

A police press department spokesperson did not have a record of the incident, stating, “There is no complaint report on file for that location this month.”

However, Deputy Inspector Stephen Spataro, the Sixth Precinct commanding officer, confirmed there was a flap at the building on Tuesday, stating, “We have a report for harassment there [but not assault] as there were no injuries reported.”

Asked if a harassment complaint or possibly dueling complaints, in fact, had been filed, Spataro responded, “Yes, I don’t believe George was a victim or accused of anything.”

According to the source, one of the responding officers, before leaving, assured they will definitely be “keeping an eye” on things at 69 Charles St.

The coveted Village address was formerly home of the great American novelist Sinclair Lewis. But a new drama even wilder than fiction is playing out there now over the fate of the newspaper that Capsis founded nearly 20 years ago.

It’s no secret that both Berke and Schwartz — the latter who is a progressive activist attorney — have each long wanted to take over control of WestView News.

The source said there is also concern that Capsis is not receiving medication that is critically important to his health. Capsis had heart stents put in a year ago and, after the procedure, lost the strength in his legs.

After The Village Sun met with Capsis for an interview at the residence nearly three weeks ago — after which Capsis then immediately met with one of his lawyers to discuss the situation about the breakaway New WestView News — an ambulance responded to the address. Berke subsequently reported that Capsis, in fact, had been “grabbing his chest” but, in the end, was O.K.