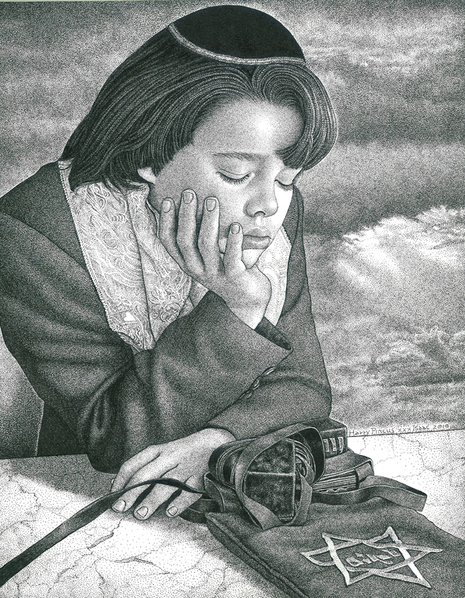 The writer's son, Isaac, at his bar mitzvah. (Illustration by Harry Pincus)

Hey, Whoopi, the only way out of racial hatred is together

BY HARRY PINCUS | Whoopi Goldberg’s unfortunate statement, that the Holocaust was not about race, is the equivalent of a Jewish person claiming that slavery wasn’t about race. The two greatest crimes against humanity must be clearly understood by all, and taught in every school.

The Nazis sought to divide humanity into two categories, the superior German race and the inferior races, composed of Jews, Slavs, Roma and Sinti and Blacks. They propagated age-old tropes of hook-nosed Jewish bankers and Jews as vermin and rodents, as justification for throwing babies out of windows and burning children alive in ovens.

In fact, the Jewish people have experienced slavery within the confines of living memory. At Auschwitz and more than 44,000 other Nazi incarceration sites, Jewish slave labor was employed to build the Nazi war machine, and more than 6 million lives were destroyed based solely upon Hitler’s theories of race.

According to Whoopi’s cushion, all white people look alike, and so the Nazis “had to do the work” to identify the Jews, and pin yellow stars of David on their sleeves. Just as Whoopi casually denied the racial underpinnings of the Holocaust, on the day that is set aside to remember it, Amnesty International labeled Israel an apartheid state. Many so-called “progressives” have now allied to isolate and boycott the Jewish state, just as the Nazis did when they began the Holocaust by boycotting Jewish businesses, and identifying Jews with a yellow star of David.

It would seem that a true understanding of why there is a Jewish state, and how it was formed, might be inconvenient for some, but shouldn’t there be an empathy between those who were enslaved and murdered solely based upon their race? Can’t we take a moment of time during Black History Month to also educate our children about the Holocaust?

Whoopi Goldberg’s misunderstanding seems to be in keeping with a woeful ignorance at large regarding the greatest crime of the 20th century. In September 2020, the U.S. Holocaust Knowledge and Awareness Survey of all 50 states reported that 63 percent of respondents do not know that 6 million Jews were murdered, and 20 percent of millennials and Gen Z in New York feel that the Jews caused the Holocaust.

I grew up in a Brooklyn neighborhood that contained many survivors of Hitler’s concentration camps. It wasn’t unusual to see tattoos from Auschwitz on the arm of the lady who was serving you dinner at the local dairy restaurant, or to hear the dialect of the old country amongst the elders on their beach chairs. I used to buy my grandmother her Jewish Daily Fauverts (the Forward) at the candy store in the building where Barbra Streisand lived as a toddler, and I had no idea that the dour proprietor was one of the few survivors of the Warsaw Ghetto Uprising. The knish store on Utica Avenue had a black and white photograph of a weeping Jew with broken eyeglasses in the window, and no one even thought to ask why we should see such a thing every time we went in to get a cherry cheese knish after school.

The Holocaust shadowed our lives, but no one ever talked about it. My cousin Abe, who lived to be 101 years old, seemed to make light of his years at Auschwitz. When I asked him if he had ever seen Dr. Mengele, the Doctor of Death, who performed heinous experiments on children, Abe just shrugged, and said “Mengele? Mengele was my doctor.” In fact, Abe had arrived at Auschwitz with a wife and an infant son. But Mengele, with a single gesture, assigned my cousin to life, and his wife and baby to death. I never dared to ask him about it.

Back in those days, there was a profound sense of shared experience between Jews and the civil rights movement. Rabbi Abraham Joshua Heschel, Rabbi Israel S. Dresner and thousands of Jewish activists and Freedom Riders risked their lives, and marched alongside Martin Luther King, who said that “Israel’s right to exist is incontestable.” Three civil rights workers, James Chaney, Andrew Goodman and Michael Schwerner, were brutally murdered in the struggle for equality. Chaney was a 21-year-old African American civil rights worker from Meridian, Mississippi, but Goodman and Schwerner were young Jewish men from New York City, who sacrificed their lives. Look at the photo of their bodies, discovered in the Mississippi mud, and see if it doesn’t bring tears to your eyes, as it did to mine.

Race is complicated, and the Jews in my neighborhood were fearful of the influx of African Americans. When new houses on Midwood Street were sold to black families who were wealthier than we were, one of the Holocaust survivors went up to the roof with a bullhorn and screamed “N—-r, Go Home!” in a thick Yiddish accent. This unforgettable incident reminds me of the attacks on Asian Americans that we are seeing today. It is as if victims need to create other victims, to prove that someone is lower on the totem pole than they are.

Our racist legacy is the great flaw in our democracy, and we have just recently seen the rise and, hopefully, the fall of a would-be fascist dictator. We may be fortunate that Donald Trump doesn’t quite have Hitler’s chops, but we need to be wary of how ignorance can lead to immense tragedy. We can’t just cancel people who have misspoke and then claim to be woke. We need to know more, so that we can see ourselves in the faces, and the stories, of others.

The other night, my son Isaac, a drummer who is much in demand, was playing at an open mic in Bushwick. Many of the acts were rappers, and after his performance someone came over, put his arm around my son, and commended him as “my n—-r.” Isaac was surprised, but I told him that it was a great compliment. It’s also the only way out of this torment of racial hatred and division. One for all, and all for one, and may Adolf Hitler turn over in his grave.

Pincus is an award-winning illustrator who lives in Soho.