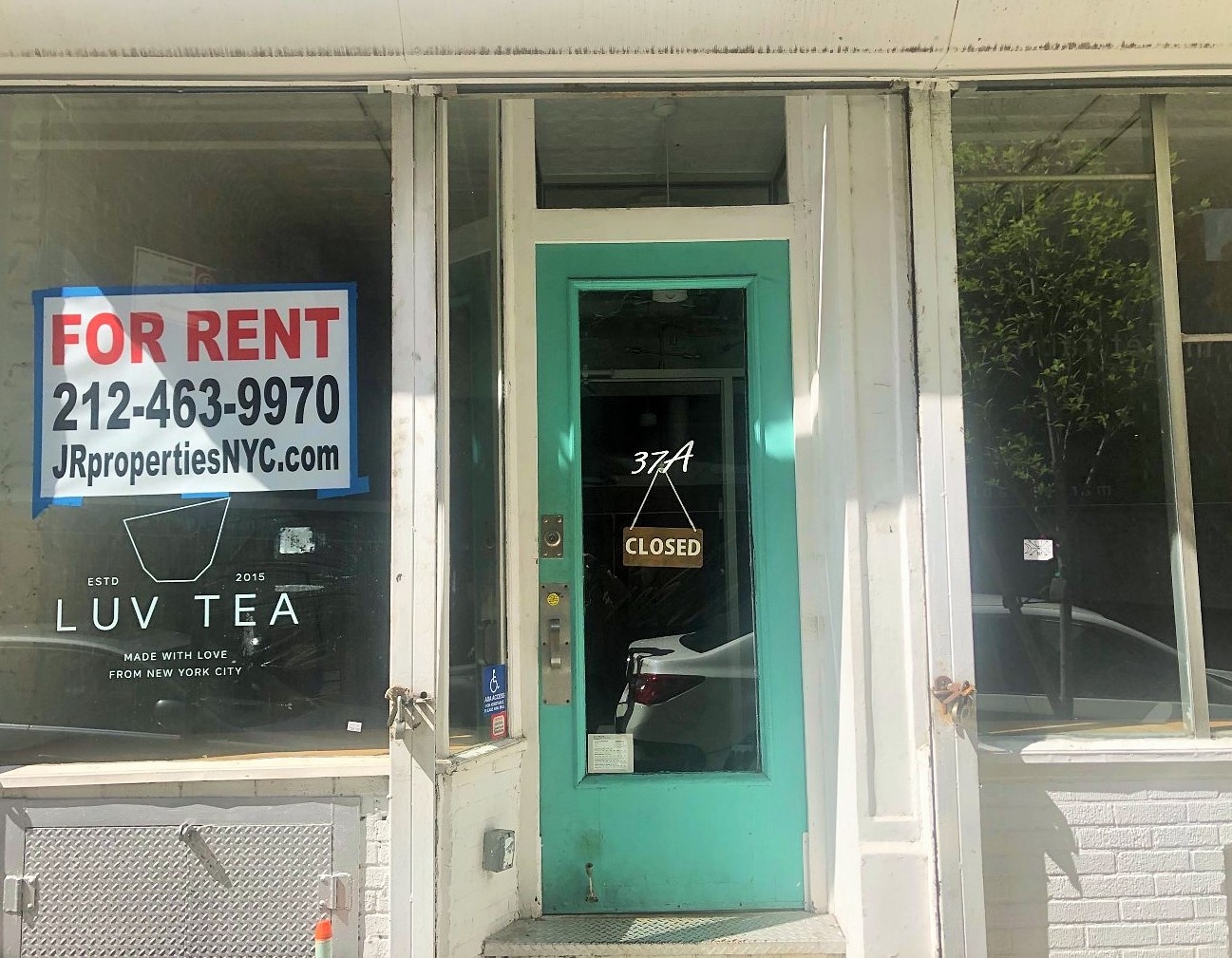 Luv Tea on Bedford Street temporarily closed during the pandemic and ultimately did not survive. Following area trends, it now looks like the space will for the first time have a business with a liquor license. (Photo by Stuart Waldman)

Who killed the little shops of Bedford Street?

BY STUART WALDMAN | I moved to Bedford Street in Greenwich Village in 1989. It was a classic mixed-use city street with single-family homes, multifamily former boarding houses, low-rise apartment buildings and tenements — all reflecting the neighborhood’s roots as a first stop for Italian immigrants. The mixed uses were on the ground floor, commercial storefronts that had been part of the neighborhood since the beginning of the 20th century.

In 1989, there was Julio and Ramon’s bodega, with its slanted floors and musty shelves, where my three-year-old son learned to say gracias. The laundromat was run by Jerry, a neighborhood guy who combined a Frankie Pentangeli rasp with a good-guy smile. Becca, of Becca’s Plants and Flowers, was surly but her windows more than made up for it. The dog grooming shop across the street was run by Nona, a fiercely efficient and chatty ex-marine. The Italian American War Veterans rented the storefront two doors down. My memories of its windows are in sepia tones: a bemedaled khaki shirt, a battalion banner, framed photos of grinning GIs.

Writing it down, it seems like a street scene on an MGM back lot, but those stores were anything but plywood fronts. They were real, solid, owned and operated by men and women providing a service to the neighborhood while attempting to make a living without answering to a boss — capitalism at its most ideal. Soon they’d meet its darker side.

In 1996 a fire put Julio and Ramon out of business. A year later the Bromberg Brothers, who operated trendy Downtown restaurants under the name Blue Ribbon, opened a Bedford Street location at the former bodega. It wasn’t long before cabs and limos were dropping foodies off to wait in line for Sunday brunch.

Blue Ribbon wasn’t in business to serve our neighborhood. It was a destination. It attracted customers from all over the metropolitan area and tourists from all over the world. It also had a liquor license. Local landlords took note of Blue Ribbon’s formula. You could ask for a lot more rent from a place that sold $15 cocktails to tourists than from a woman who clipped her neighbor’s pug’s nails.

The year after Blue Ribbon opened, just before Christmas, Nona was served with an eviction notice. A wine bar, owned by one of Mario Batali’s business partners, took over the spot. Then came a dizzying succession of changes. The Landmark Restaurant Group opened Ditch Plains, a restaurant that was an excuse for a bar scene. A celebrity chef and a corporate lawyer opened a high-priced restaurant where a carpenter shop and a beauty parlor had operated. The Italian American War Veterans gave way to a series of touristy trattorias. Blue Ribbon leased a space that had once housed an Italian social club, turning it into a bar for customers who were waiting for a table at their restaurant.

In less than a decade, most of Bedford’s neighborhood stores were replaced by restaurants with liquor licenses, the only kind of business that could afford the now obscene commercial rents. For those that survived, lease renewal time would become a ritual of anxiety and sometimes throwing in the towel. A shoe repair shop, florist, yarn store, three antique stores — all have disappeared.

It’s not as if the city was unaware of the vulnerability of small retail on streets like Bedford. The commercial section of New York’s Zoning Code began by stating that its “legislative intent” was to protect retail shops that served “the regular shopping needs of nearby residences.” This protection was to be “particularly in areas where the established pattern is predominantly residential but includes local retail uses on the lower floors, by regulating the intensity of local retail development, by restricting those types of establishments which generate heavy traffic… .”

The intent of the zoning code could not have been more clear, and it could not have been more ignored. Administration after administration responded to restaurant industry lobbying by permitting the spread of bars and restaurants to the detriment of neighborhood stores. Now the de Blasio administration is shifting from passive acceptance to active encouragement. Working with lobbying groups like the New York City Hospitality Alliance, the administration is moving forward with plans to change the Zoning Code so that outdoor dining on residential streets — temporarily legal as a pandemic emergency measure — will be made permanent.

The effect of this policy on Bedford’s few remaining stores will be brutal.

Bedford has a stretch of five small retail stores that have survived mainly because their space is too small to be profitable as a restaurant. If outdoor dining becomes permanent, the sheds can be added to a storefront’s footprint and a restaurant becomes a realistic option.

Brokers have already begun marketing storefronts in anticipation of permanent outdoor dining. Community Board 2’s April calendar lists an LLC applying for a liquor license at one of the small shops, 37-A Bedford St. It will be the first liquor license at this location. No. 37-A had been a funky antique store, then a yarn store and most recently a tea parlor. If it becomes a bar and restaurant, its neighbors — a barber shop, exercise studio and skin care salon — had better start looking over their shoulders.

Every “For Rent” sign is a story of loss, for individuals and for the community. In “The Death and Life of Great American Cities,” Jane Jacobs describes what the local store means in our daily lives:

“Most of it is ostensibly utterly trivial but the sum is not trivial at all. The sum of such casual, public contact at a local level — most of it fortuitous, most of it associated with errands, all of it metered by the person concerned and not thrust upon him by anyone — is a feeling for the public identity of people, a web of public respect and trust, and a resource in time of personal or neighborhood need.”

Coming out from the forced isolation of the pandemic, these words have a particular poignancy. But they also serve as a warning. As we slowly recover, we cannot hurtle thoughtlessly into the future. Before we make any decisions, we have to continuously ask: What kind of city do we want?

Waldman is a writer, publisher and activist. This piece was first published on Medium.