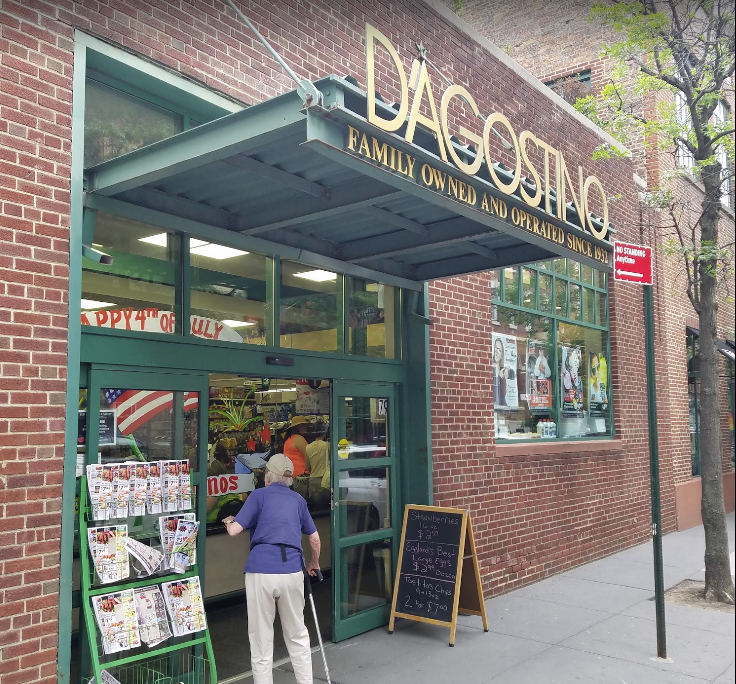 The D’Agostino at Bethune and Greenwich Sts., above. (Photo by Google)

BY MICHELE HERMAN |The last time I went into my local D’Agostino, on Bethune St., I needed a new head for my Quickie mop. I was in a rush, so I grabbed one and handed the cashier my credit card without checking the price. I’m very frugal but figured a mop head couldn’t cost more than a few bucks.

I checked the price tag when I got home: $14.99. It wasn’t even the kind with a real sponge — just crummy blue foam rubber. I looked up prices online: $3 to $6 for the same product.

I understand that a supermarket in a high-rent neighborhood like the West Village can’t compete with the Internet, but this seemed way, way out of line.

I returned it the next morning in a huff. The manager apologized and seemed to understand my dismay, but said he couldn’t do anything. I decided to put in a call to corporate.

I learned that D’Agostino and the Big Apple Group, once bitter competitors, have been working together informally for about three years and that their formal merger went through earlier this year — clearly a case of a new shared enemy (Whole Foods, Trader Joe’s, Fresh Direct, Amazon, etc.) making for strange bedfellows.

Red Apple is the conglomerate owned by erstwhile mayoral candidate John Catsimatidis, and supermarkets make up a tiny fraction of the company’s holdings; the real estate business is much more lucrative than the grocery business.

Nicolas D’Agostino III is the last member of the D’Agostino family still in the business, which has been around since 1932. He’s the president of the New York Food Group, Red Apple’s supermarket division, which also includes Gristedes and Foodtown, a total of about 20 stores, most of them in Manhattan.

It took a very long time to get anyone at Big Apple to talk to me, but eventually I had a long and surprisingly candid phone conversation with the last Mr. D’Agostino himself, Nick the Third. I am happy to report that he sounded like a decent, earnest guy trying to keep his stores going while also doing well by his employees.

I am depressed to report that he admits he doesn’t know how to accomplish this. When I asked him if the Bethune St. store is likely to be around in five years, he did say yes, but he made it clear it won’t be the full-service supermarket it is now.

“We’re trying to see how we can survive, what changes we can make to be more accessible to our customers,” he told me. “It’s certainly not easy with rents and taxes and rules.”

He named a variety of additional challenges: sidewalk fruit carts, customers who drive to the suburbs to do their weekly shopping, the coming increase in the minimum wage to $15 an hour, and the fact that D’Ag is a union shop.

“Trader Joe’s can come in without a union,” he said, one of several criticisms he had about the chain. “But when our company started, unions were stronger. There was picketing, and we always thought we had to have a union. I’m not necessarily against the union; I think pensions and benefits are important things.”

I said, But doesn’t D’Ag own the Bethune St. building, and doesn’t that alleviate much of the economic pressure? He set me straight: It’s his parents and siblings who own the building, and he doesn’t really fault them for wanting a decent return on their investment.

“They feel they own an asset and they want as much money as they can get — not in a bad way, and it’s not to say I’m overpaying,” he said.

I asked him about the price gouging at Bethune St., giving the example of the mop head, as well as the Land O’ Lakes butter that was going for $8.99 a pound last time I checked, more than twice what the same product costs at Western Beef on W. 16th St. He seemed a little taken aback and said he would look into it.

“There’s no way mathematically my price should be that much higher,” he said. “Yes, it will be higher, in some cases dramatically, but I have to figure out what could be causing that.”

He told me that there used to be an art to finding the right markup — one that wouldn’t turn customers away but that would allow for the stores to be profitable.

“Twenty or more years ago, you could round up the prices and be O.K. If we thought the perfect price for a product was $1.94, we rounded it to 1.99. Now I can’t afford to round up. On high-priced items we take less of a profit than we used to. This is not a mathematical question, more a philosophical one.”

I suggested a move in the opposite direction: Why not lower the price on some staples as an act of good faith, plus a way to draw cost-conscious people like me into the store? Again, he was philosophical about the need to find the right balance.

I sensed that he is just embarking on the large, messy task of reconceptualizing his stores for a new and rapidly changing economy and populace, and that it will take a long and risky process of trial and error.

He is working on switching the name (and the associated identity) of some stores to fit their neighborhoods better. For instance, the Gristedes on Roosevelt Island will become a more downmarket Foodtown. As for the D’Ag on Bethune, he talked mostly about changing the product mix.

“I think we do a good job on the hot bar and sandwiches,” he observed of the West Village location. “We will have to stop selling some things being sold on the Internet and find other things — why stock something if you can get it cheaper elsewhere? At some point, it doesn’t make sense to put it on the shelf. I will say this: Once I price myself out of the market, I should stop selling that item; it’s embarrassing to me and embarrassing to the customer.”

He also said that perception is important, which he illustrated with a story:

“A customer complained to me that we don’t sell the organic Ben & Jerry’s,” he related.

He went and researched it and learned that there is no such thing. But still she insisted. How did she know?

“Because she bought it at Whole Foods.”

He also feels that Trader Joe’s sometimes gets by on perception and packaging more than on quality.

“People have their own beliefs,” he said. “But his produce is packaged in smaller quantities and is a different quality than what I sell. We’ve always thought there was a reason to sell higher-quality meats and produce. Should I sell bigger and nicer stuff than him or is it not worth it?”

That was one conundrum I had no easy answer for: I can’t compare the quality because D’Ag’s prices on produce and meat are generally so high I don’t buy either there. And I find that Trader Joe’s has so much turnover that the perishables I do buy there are usually fresh, as well as more reasonably priced.

I tested out a theory of a friend of mine who said that D’Ag has become just a big convenience store servicing nannies who’ve been handed their employer’s gold card and don’t even look at the prices. D’Agostino pretty much agreed.

“The way the business used to work,” he recalled, “people appreciated the retailer putting the products on the shelf.”

The retailer got a lower price from the supplier, enabling the store to make a profit by charging a reasonable markup to the consumer.

Now, he said, “Our biggest challenge is to figure out what we can be, what we can provide that’s different and that’s valuable to the customer, and then figure out how to communicate it. Having well-trained employees has some value, but maybe not.”

One heartwarming story D’Agostino told me points to the value of running a union shop, where turnover is relatively low and staff loyalty fairly high. A couple of years ago, during a time of empty shelves — before Red Apple stepped in with loans to pay the creditors — several employees came up to him and offered to help the store out, out of their own pockets.

“John desperately wants to find a way to run supermarkets,” Nicolas D’Agostino said. “I’m not sure why he does it, but he does.”