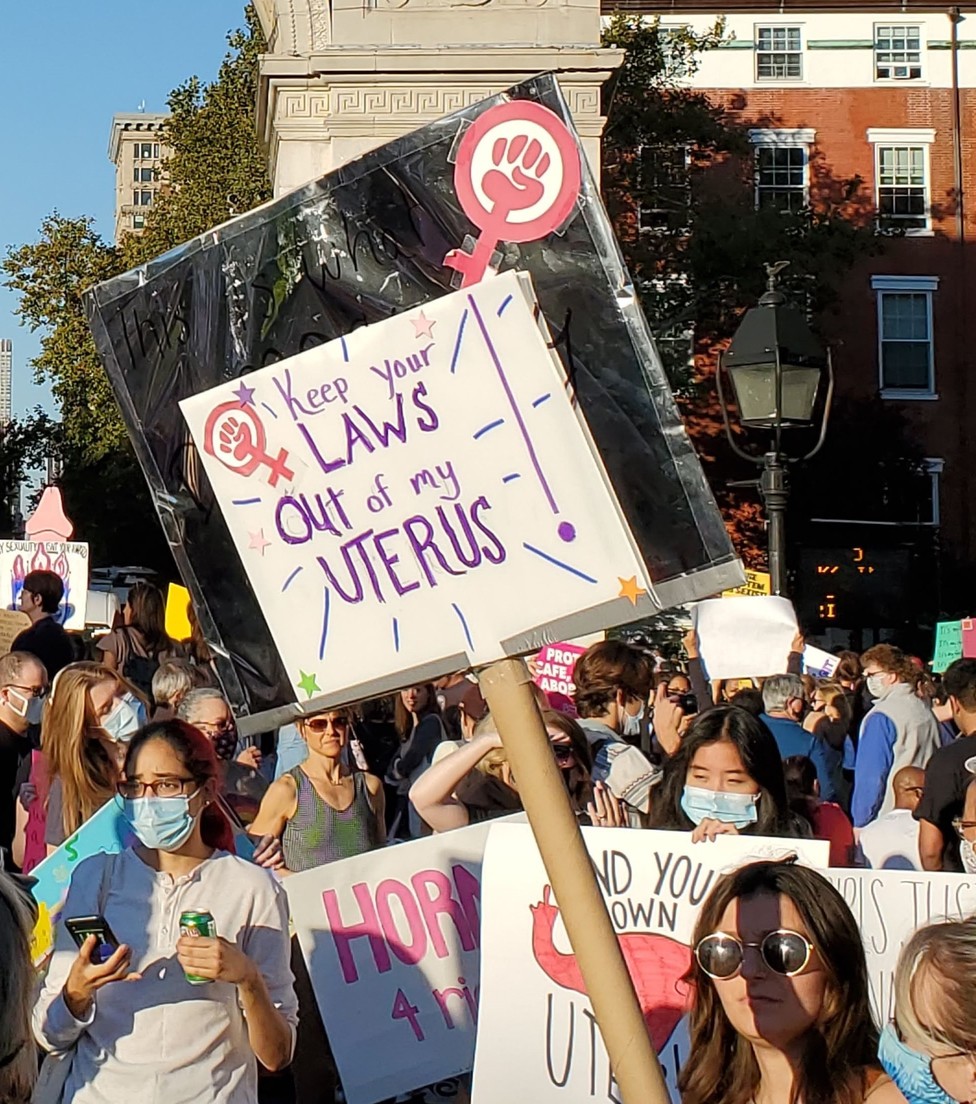 Women, along with some men, gathered in Washington Square Park Saturday to protest attempts to roll back abortion rights. (Photo by The Village Sun)

‘We’re not going back’: Women march against threat to abortion rights

BY LINCOLN ANDERSON | The sunshiny weather on Saturday was beautiful for the Women’s March. But hanging over the event was a dark cloud as the conservative-heavy U.S. Supreme Court is set to weigh in on the fate of abortion rights in America.

Marches and rallies were held across the nation as part of the annual event. In New York City, the main rally was in Foley Square. Many later made their way to Washington Square Park, where they flooded into the space between the fountain and the arch. A group of women, all dressed in white, stood along the edge of the fountain and led the crowd in political songs.

“Not the church! Not the state! People must decided their fate!” they chanted, and “Keep your rosaries off my ovaries!”

On Sept. 1, the Supreme Court voted, 5 to 4, to uphold a new Texas law, SB 8 a.k.a. The Heartbeat Act, which bans abortions six weeks after pregnancy. The law is based on a new tactic, “private enforcement,” in which not the state but private citizens are allowed to sue providers and others who help women get abortions. Plaintiffs win a minimum of $10,000, plus attorney’s fees, if their suits are successful.

The U.S. Justice Department is suing to stop Texas from enforcing SB 8.

A number of other states have previously passed “heartbeat laws” but they are currently tied up in the courts.

Meanwhile, Roe v. Wade, which was passed in 1973, established the national law that states must allow abortions until the fetus is viable outside the womb, or from 24 to 28 weeks into pregnancy.

Some women skipped the Foley Square rally and made their way directly to Washington Square Park. Gathering in the Garibaldi Plaza, they spoke of their outrage over the new Texas measure and the direction of the Supreme Court.

“I love babies,” she said with a smile, prefacing her comments, but then added, “Look around, look at what happens when babies grow up. You get terrible people.

“I think it’s just another maneuver that our government is doing to exert control on us,” she said of the anti-abortion push. “I don’t think they even care about babies. They care about spreading a political rhetoric and spreading government control.”

Emma Gleeman, 27, a geologist working in environmental education, toted a placard with a quote from the late Justice Ruth Bader Ginsburg, “When there are NINE.” That was, she explained, Ginsburg’s answer when asked when there would be enough women on the Supreme Court.

Two friends from Staten Island expressed an idea that others at the rally — judging by their signs — also supported: vasectomies versus abortions.

“I would say, yes, only because they’re reversible,” Megan Tompkins, 22, explained of making males get snipped. “Little boys should get it when they’re, like, 12. And then, when the woman wants it, they can sign off on it.”

“I think it’s, like, a rebuttal,” her friend Samantha Swetz, 23, added. “It makes more sense to unload the gun than to shoot at a bulletproof vest.”

A woman who spotted their “VASECTOMIES PREVENT ABORTIONS” sign came over and told them that she had recently read an article about a trend of guys on the Hamptons singles scene getting vasectomies.

Reeni Goldin, a daughter of the late activist Frances Goldin, traveled down from New Paltz for Harriet Putterman’s memorial on Sunday but also for the Women’s March, too.

A lot women were enthusiastically taking photos of her sign, which they said nailed the current situation: “INTENT ON CONTROL? CONTROL YOUR DICK!”

She was referring to “shadow dockets,” in which the court makes decisions without live arguments, sometimes late at night.

“And what about that horror story [Brett] Kavanaugh?” she asked about the Supreme Court justice. “He has two daughters — if they get an unwanted pregnancy, you know they’re getting an abortion.”

Peggy McNamara, a teacher educator from Chelsea, was gathered in the park with a group from nearby Judson Memorial Church on Washington Square South. She said that it was discouraging to have to fight the same battle again from nearly 50 years ago when Roe v. Wade won approval.

“As a person in her 60s who was around when it became the law,” she said, “it’s very frustrating that white men are trying to police the bodies of women. We thought we were beyond that. Roe v. Wade is the law.

“The Texas law feels like slavery,” she added. “It’s like, the government isn’t gonna catch people — it’s like slave catchers. When you put people in the position of turning in people, that’s not a democracy. That sounds like fascism.

“People I knew in high school got illegal abortions — and some of they got hurt,” she said.

She remembered the day that Roe v. Wade passed. She was in college at Fordham University at its Lincoln Center campus.

“It was a very joyous day,” she recalled.

Roberta Schine — who was Frances Goldin’s friend and yoga teacher — came to the rally with Reeni Goldin. She, too, was saddened to feel that her cohort must repeat past struggles all over again. She remembered marching for Planned Parenthood decades ago.

“We’re all meeting again today,” she said. “We’re just a little older. To try to find the energy to do this — after 50 years.”

Meanwhile, a group of self-dubbed “ex-Mennonites and ex-Amish” from Pennsylvania just happened to be in the Garibaldi Plaza, too.

Allen Sherry, who was among them, holding a Bible, said, “We come here around once a year to preach the gospel. We did not know that this rally was happening.”

Asked if they opposed abortion, Sherry said, “The position of the Bible on abortion is pretty clear: God hates the shedding of innocent blood.”

Asked why they were standing their ground among all the abortion activists who had packed into the plaza, Richard Dougherty chimed in, “Well, we were here first.”

Just a few feet away them, a young woman stood leaning her back against the Garibaldi statue. She held a protest sign: “MY BODY MY CHOICE.”