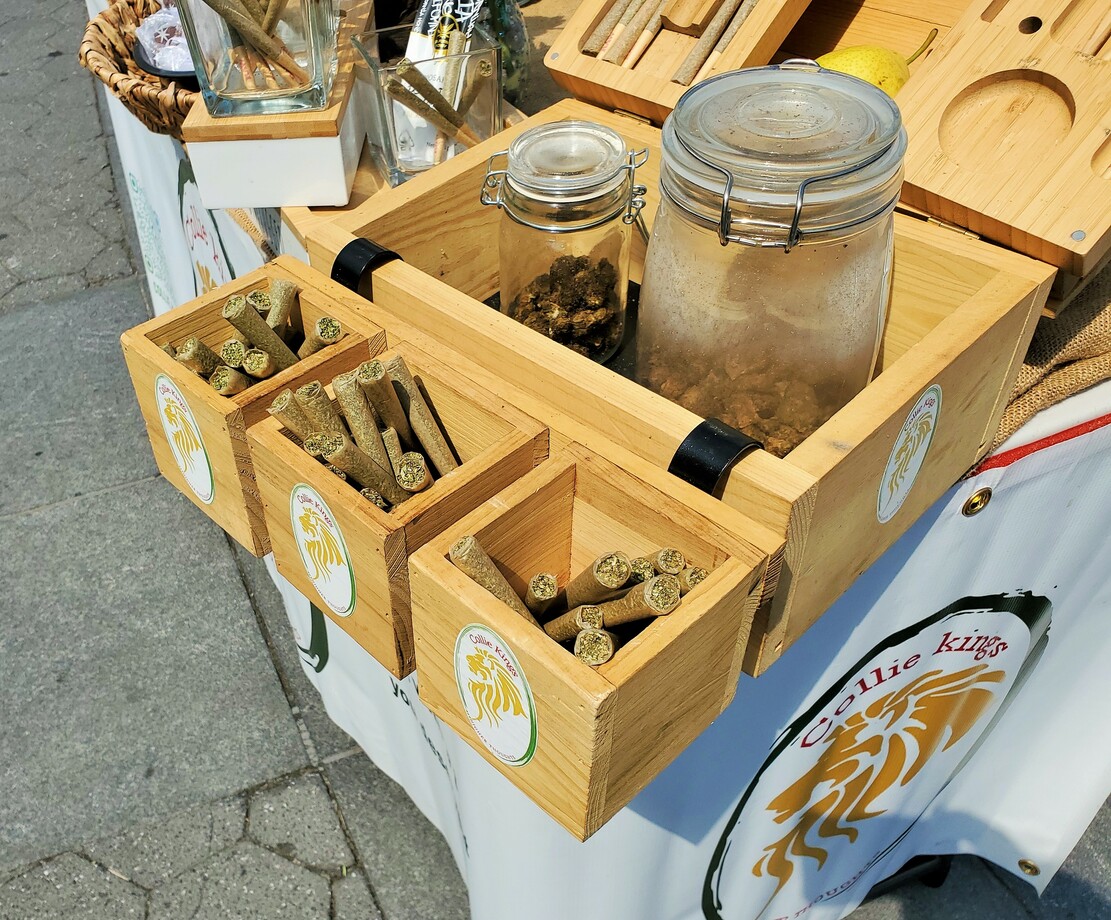 A vendor in Washington Square Park sold his Collie Kings brand of weed. "Collie," as he explained, means pot "in the islands." (Photo by The Village Sun)

BY THE VILLAGE SUN | The message is still zero tolerance.

Mayor Adams recently declared that enforcement against the marijuana gray market should not be “heavy-handed.” But the commander of Greenwich Village’s Sixth Precinct says those words won’t change his own no-nonsense approach to policing open pot sales in Washington Square Park.

Adams made the remarks at a Cannabis World Congress and Business event at the Javits Center earlier this month.

Legal pot sales and state-sanctioned dispensaries likely won’t occur until later this year. Adams told reporters at the June 3 event that, in the meantime, he doesn’t support busting people selling pot in stores or on the street. Currently, merchants sell cannabis at smokeshops, even delis and bodegas, as well as in vans and from tables all over the city.

“There needs to be a system of not heavy-handedness, but going in and explaining to that store that, ‘Listen, you can’t do this,’ give them a warning,” Adams said, according to the Daily News.

“If they refuse to adhere to the rules,” Adams said, “then you have to come back and take some form of enforcement actions, such as a summons, such as, you know, talking about their ability to sell alcohol.”

In March, Spataro told The Village Sun the precinct was taking a “zero tolerance” stance on pot vending in the park because the so-called gray market can attract crime. As The Village Sun previously reported, armed robbers targeted pot vendors in the park twice earlier this year.

This Friday, Spataro said nothing that the mayor said will change his own approach to dealing with weed sales in Washington Square, the city’s top outdoor “cannabis casbah.” In addition to pot selling not being legal, neither is vending in the park without a permit.

“The mayor indicated he preferred we warn people first before taking enforcement, which we do,” the captain said of the news reports of the mayor’s comments. “We have given countless warnings when addressing marijuana sale and other vending in the park. Additionally, as per statute, the N.Y.P.D. does not enforce [against] merely smoking in the park, only sale.

“In addition to quality-of-life complaints [about pot vending in the park] from the community,” Spataro continued, “our concern is that we have seen violent crimes, such as gunpoint robberies, associated with the sale of marijuana there.”

Spataro says he’s eager for legal dispensaries to start operating, which would take pressure off Washington Square Park as a point of sale for pot.