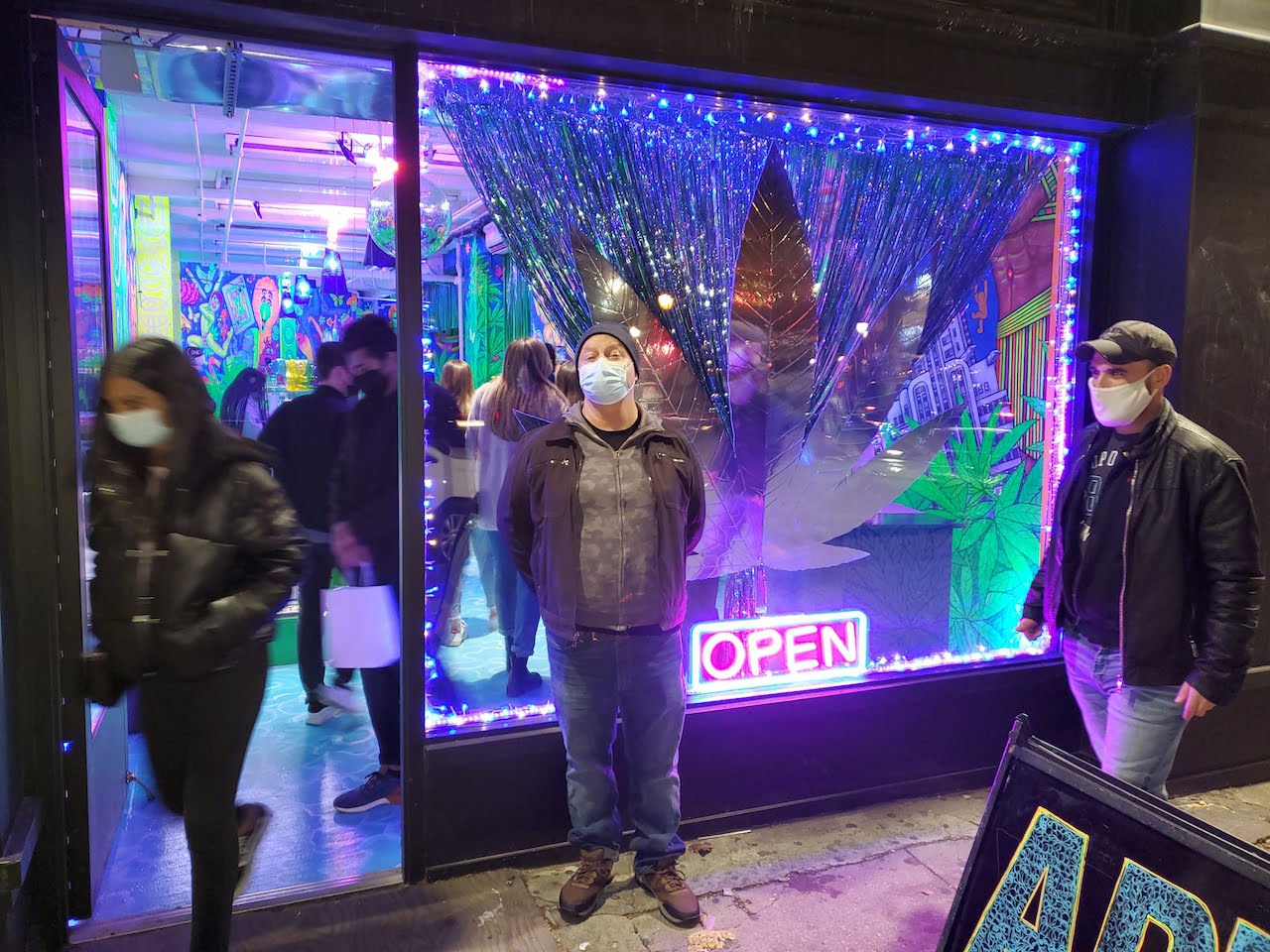 BY THE VILLAGE SUN | For the past few decades at least, the strip of Sixth Ave. between W. Third and Fourth Sts. in Greenwich Village has had a bit of the feeling of a pre-Disney Times Square/42nd St.

There are garish bright lights and, until recently, a few stores selling sex toys and outfits, plus tattoo parlors. Don’t forget the blazingly lit Papaya Dog on the corner, manned by its friendly counter guys.

Today, one Fantasy Parties/Tattoo store does remain. But a newcomer to the funky stretch is Weed World, where you can buy lollipops and gummies that, well…may or may not be infused with actual weed.

Weed World is best known for its colorfully painted vans that ply Midtown. The Village store has been open four months.

On Friday and Saturday nights, you’ll find Howie Keck at Weed World’s door, inviting people in to check out the art opening for his murals. He actually painted the murals back in September and the art opening is an ongoing weekly affair.

A veteran of the Downtown club scene in the 1980s and ’90s, the pop artist painted murals at the Palladium disco (“black and white, X-rated,” he said), for Peter Gatien’s Limelight club and for Madonna, as well as at hotels (“G-rated”).

“Because of my art, I’ve gone all around the world,” he said.

Originally from Michigan, Keck used to live above the Sound Factory nightclub, which later became Twilo, on W. 27th St. in Chelsea. Now he’s right across the river in New Jersey, from where he has a direct view of The Vessel and Hudson Yards.

Keck painted the entire Greenwich Village Weed World space in 1,000 hours, doing all the work himself.

“Help would slow me down,” he said, adding it’s tricky to work with fluorescent paint, which must be applied very smoothly, “or you get lumps.”

The theme of the murals is apparently celebrities who are or were pot smokers or, in one case, acted in a stoner comedy movie.

On Friday night, Keck was pouring complimentary glasses of wine for store visitors/gallery-goers. He said he enjoys weed in his world, but admits he doesn’t partake as much as he once did.

As for how much real weed Weed World’s candies contain, however, salespersons at the store indicated that there is some. One of them said there is both THC, pot’s psychoactive ingredient, and CBD, cannabinoid oil, in them.

She added that Weed World’s candies are non-G.M.O. and pesticide-free.

The lollipops go for $6 or four for $20. Pina colada is a popular flavor.

Asked if it’s legal to sell pot candy in New York, she offered, “It’s not legal yet, it’s decriminalization. Decriminalized and regulated.”

One veteran toker, though, when asked if he had tried the lollipops and if they packed any punch, just shrugged, “It’s a lollipop.”

Some say Weed World’s allegedly pot-infused products are a scam.

As one Yelp reviewer put it, “Basically it’s a tourist trap hoping to get stupid people, like me, into their store believing that “WEED WORLD” is just exactly that. Instead they need to rename it to “CBD WORLD” so they can stop lying to customers.”

Weed World is open from Thursday to Sunday, starting at 1 p.m.

For more of Howie Keck’s art, check out his Instagram page.