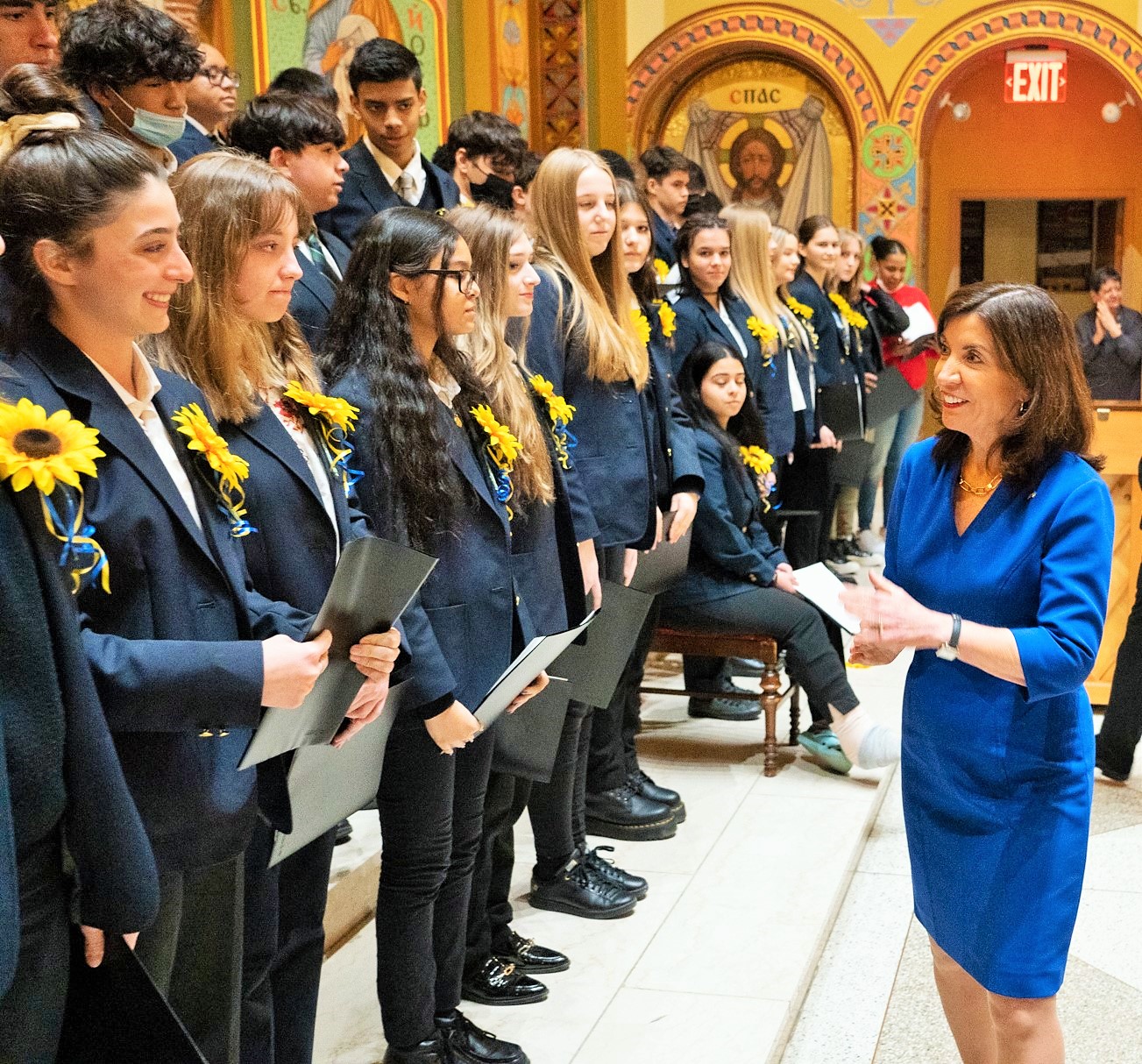 ‘We stand against this tyranny’: Gov. Hochul slams Putin in speech at East Village church

“We gather here tonight with prayer on our lips, but I also feel the pain in our hearts, but yet, I also sense the defiance in our souls,” she told a packed crowd at historic St. George Ukrainian Catholic Church on E. Seventh Street.

“We’ve seen Ukrainian people under attack by Putin and the army,” she said. “But we have seen them stand tall against tyranny in a way that inspires the rest of the world. It is profound to witness what the world is watching unfold before our eyes.

“So, on behalf of 20 million New Yorkers, I am here to say with resolve in my heart, that we stand against this tyranny, and condemn Putin’s unjust and inhumane violation of the sovereignty of Ukraine. And we will stand with Ukraine and its people now, and forever more.”

Among the congregants were about 80 students from St. George Academy, on E. Sixth Street, where nearly 40 percent of the student body is Ukrainian. They had put in a long day, staying after school, getting dinner and then attending the 6 p.m. Mass and prayer service.

“To my students, some of them have mothers and fathers in Ukraine and they are accountants and shopkeepers, but now they are wearing fatigues and carrying AK-47s and making Molotov cocktails and they [students] don’t know if they will every see their families again,” said Andrew Stasiw, the principal of St. George Academy.

Stasiw said he had a cousin, Anna Stasiw, who earlier in the week was in a bunker in Kyiv with her 9-year-old son Artur “scared to death.” But by Thursday he said she had managed to safely leave the city. The principal said his cousin’s husband, Maksyn, stayed behind and joined the army.

“A million people have left, but over 40 million remain and their message is ‘Screw you, Putin,'” he said.

Dozens of the Ukrainian students at the Mass sported bright yellow sunflowers on their lapels. The sunflower is the national flower of Ukraine and has become a universal sign of resistance and support of the people of Ukraine.

“These kids are facing the reality, as I am, will we ever see our loved ones again?” Stasiw said. “It was heartening to hear Governor Hochul speak.”