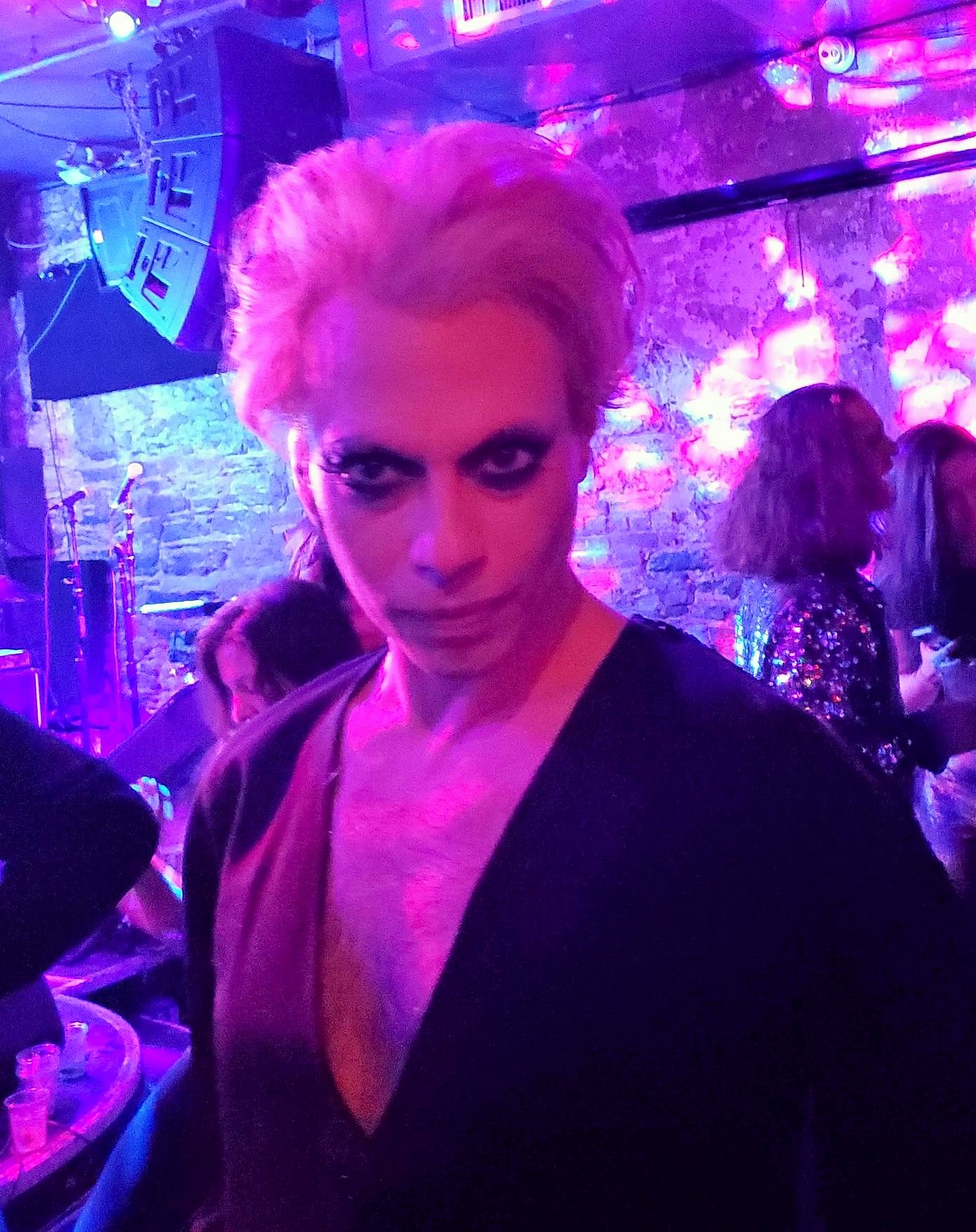 Michael T after headlining a Bowie show at the Bowery Electric earlier this year. (Photo by The Village Sun)

We can be heroes: Michael T and the art of Bowie

BY BEN TOGUT | Performer Michael T has been a David Bowie fan for as long as he can remember.

“What I found most inspiring from Bowie was his fearlessness,” Michael T told The Village Sun about his initial love of the performer. “Obviously, some of the outrageousness or what was considered outrageous at the time. It came at that point in my life when one can become really overtaken by certain things. And with Bowie it was just a strong connection.”

As a young adult, Michael incorporated elements of Bowie into his “club kid” persona when he started frequenting nightclubs, like Limelight.

“I would try to do my versions of Bowie’s looks and I think I had a Ziggy haircut in ’85, ’86,” he recalled. “I just decided the Bowie tag was something that always came with me. People knew from the onset that I was a huge Bowie fan.”

Despite his lifelong love of the rock star, Michael didn’t establish himself as a David Bowie performer until later in his career. In 2000, when Michael started throwing the New York City rock party Motherf—er, performing took a backseat in his life.

“Toward the end of Motherf—er was when I started to perform again, and then the focus was on the Bowie shows,” Michael explained. “It happened somewhat organically and somewhat like, ‘It’s sort of now or never, I’m really going to try and attempt to do this seriously.’”

Despite Michael’s seamless ability to emulate Bowie on stage, he doesn’t see himself as an impersonator. Instead, Michael channels several of his influences when he’s performing.

“There’s probably some Freddie Mercury in there, some Prince, there could be a dash of Elvis,” Michael said. “It could be a look that I saw in a video or a gesture that Norma Desmond does in “Sunset Boulevard.” I store these things because I find them impactful and effective.”

Michael performs in other musicians’ Bowie shows, but the ones he puts together himself are the best in New York City. In addition to his own numbers, he has talented guest musicians join him on stage for different songs and they never disappoint.

As a longtime Bowie aficionado, Michael questions the motives of new fans who use liking Bowie as cultural currency following the music icon’s death in 2016. He argues that the younger generation seems to be attracted to the rock star because of his eccentricity rather than a genuine love of his music.

At the same time, the performer is excited about the recent renaissance of Bowie in popular culture and believes people will continue to celebrate him for years to come.

“There’s just a pool of wealth that I think people are going to be influenced and inspired by,” he said. “Between the music and the fashion and the film work, one could even call him a Renaissance man that used rock and roll as his main vessel to get his various messages out. I think at this point it’s fair to say he’s going to be there with The Beatles and Elvis and Michael Jackson, that he’s always going to be there.”

More information about Michael T and his performances can be found on his Facebook page.