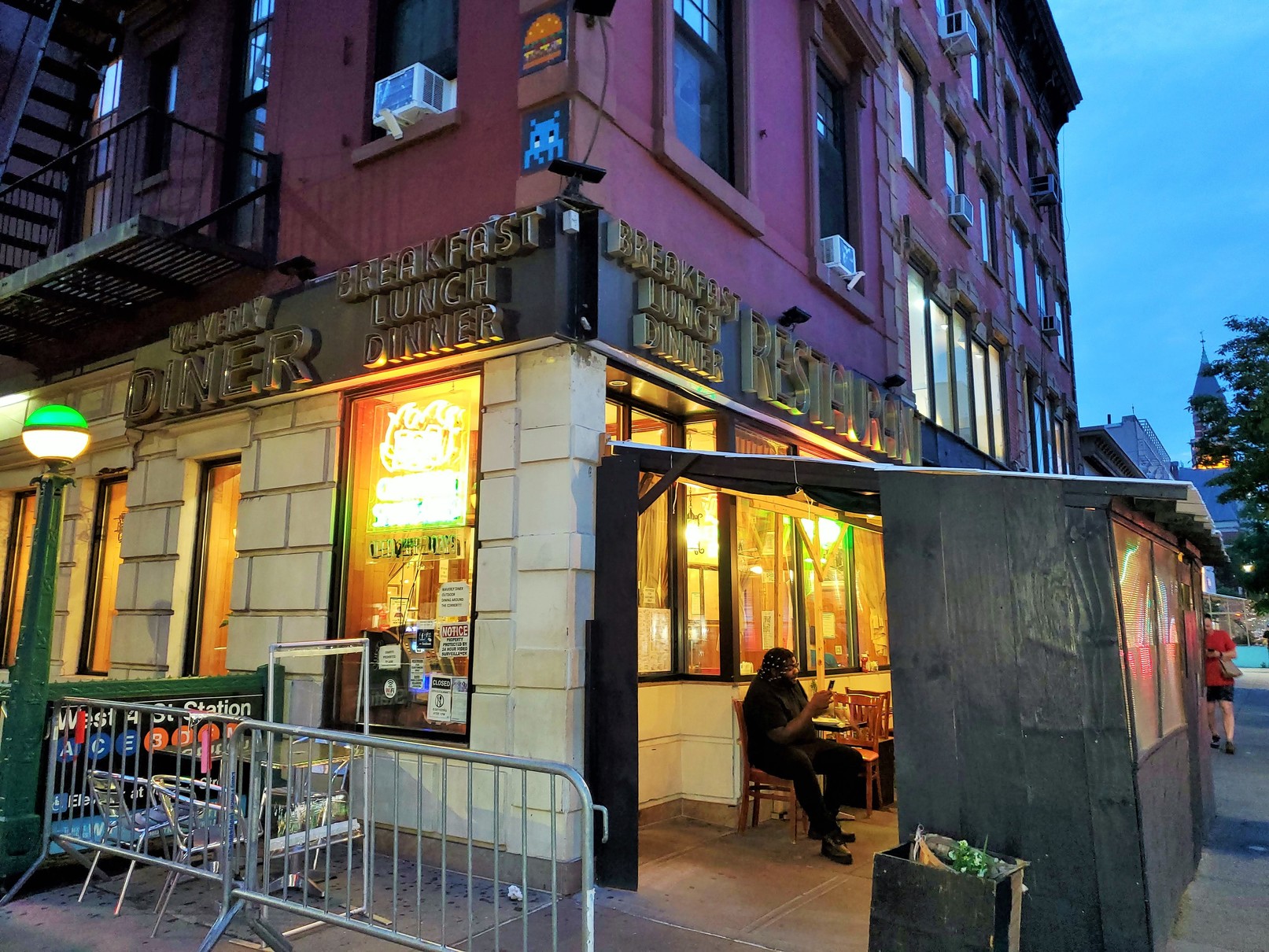 A security guard sits beside the front door of the Waverly Diner on a recent early evening. (Photo by The Village Sun)

Waverly Diner hires security due to drug use outside on street

BY THE VILLAGE SUN | Now on the menu at the Waverly Diner — a security guard.

The classic Village restaurant, at Waverly Place and Sixth Ave., recently hired a guard due to issues with homeless people hanging out and doing drugs around the intersection and also sometimes panhandling from diners.

When the Village Sun passed by early one evening the other day, a man could be seen intently sucking on a tube-like pipe just east of the W. Fourth St. subway entrance outside the restaurant. He weaved unsteadily down the sidewalk as he smoked. A young man, with his shirt rolled up above his stomach, came up to him, rested his arms atop his head and stood chatting with him.

A waiter from the restaurant came outside and rested his arms on a metal police-style fence the place has installed by the entrance. With a furrowed brow, he gazed down the block intently toward the pair. He shook his head. He said the restaurant had hired the security guard about two weeks earlier.

Just before the waiter came out, the guard had perfunctorily strode toward the pair, apparently trying to make sure they kept their distance from the eatery. The waiter explained that the diner doesn’t want its customers, while they are eating, to have to look at people doing drugs outside.

Nodding toward Washington Square Park one short block to the east, the waiter, who did not want to give his name, said with frustration, “They closed the park at 10 p.m. because of drugs.”

He looked up Sixth Ave. toward a homeless man seated at the curb in front of a shuttered restaurant, saying they had gotten him to move away from the diner.

He said police have not been much help in getting the druggies to stay away from the place.

“We called the police,” he said. “They say [to them], ‘Gotta go.’ So they go around [the block] and come back again. They don’t do anything.”

The Sixth Precinct did not respond to a request for comment.

As for the police fences near the place’s entrance, the waiter said those were added also partly to create a barrier for some outdoor seating there.

The man glanced, in exasperation, at the bank branch at the intersection’s southwest corner. Three men stood in front of the place, all intently smoking something near a pile of luggage.

“This guy’s been like five months over there,” the waiter vented.

Near the intersection’s northeast corner, three people, their possessions piled around them, were slumped down in front of the subway entrance outside the vacant former Duane Reade store. A man stood talking to one of them. A new market is slated eventually to fill the empty storefront.

As for the guard, he declined to talk or have his photo taken.

Otherwise, the intersection was still pretty quiet compared to pre-pandemic times. Occasionally, young couples riding skateboards or with their boards clamped to their hips could be seen going to or from Washington Square Park.