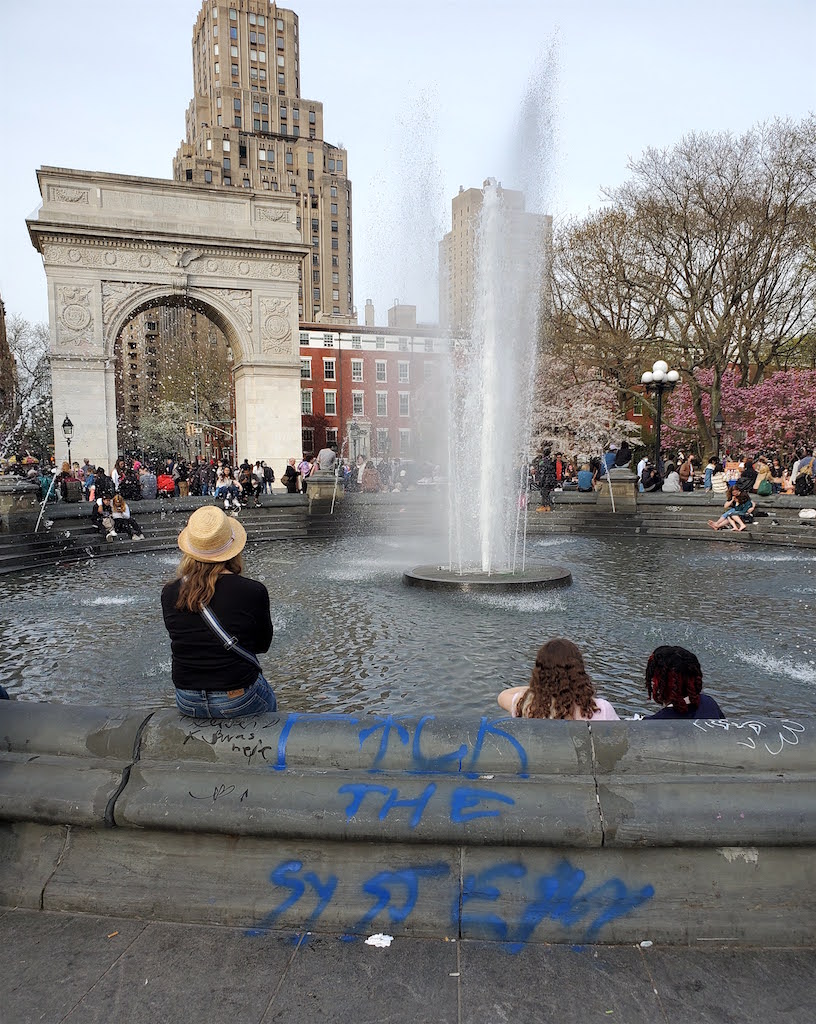 The park was crowded and graffitied, but pretty calm, earlier on Saturday night around 7:30 p.m. "F*CK THE SYSTEM," reads the graffiti on the park's fountain, above. (Photo by The Village Sun)

BY THE VILLAGE SUN | A heavy force of police in riot gear cleared partiers out of Washington Square Park on back-to-back nights over the weekend after some of the revelers refused to leave — and in one case bombarded the officers with thrown bottles.

In addition, one officer was punched in the face while trying to make an arrest outside the park early Sunday morning, while a youth punctured a police car’s tire inside the park Saturday morning.

Meanwhile, locals lament that conditions in the square are the pits and are declaring that it’s time to “take our neighborhood back.”

The Daily Mail reported that hundreds of young partiers packed the park — which, the article noted, “is regarded as the heart of New York University” — on Friday and Saturday nights, in defiance of ongoing coronavirus rules limiting large gatherings.

Neighbors might take exception to the landmarked park being called the heart of N.Y.U. rather than the heart of historic Greenwich Village, but there’s no denying that it was jam-packed with hundreds of people both nights.

The gatherings were for pleasure, though, not protests for Black Lives Matter or other causes as has often been the case over the past year.

In a new twist on the park scene, a video posted with the Daily Mail article shows the park literally “get lit” Saturday night, as a woman is seen twirling fire batons before an appreciative crowd.

However, a large detail of helmet-wearing police ultimately swept into the square after midnight on both nights to snuff out the party and enforce the park’s curfew.

Evrim Can, a community affairs officer at the Sixth Precinct, told The Village Sun that police well know that neighbors are not happy with the boisterous scene.

“The buildings surrounding the park are constantly complaining about the park and noise and everything,” he said.

He said that on Saturday night, as usual, about two to four officers from the precinct went to close the park for its curfew around midnight. Typically, the officers just move the metal barriers into place in front of the park’s entrance areas and that’s it.

“We normally don’t run into problems closing the park,” Can said.

But this night, not everyone was leaving — plus some people also reportedly started throwing things at the officers. As a result, a larger force of dozens of police ultimately was called in.

“By 2 a.m. the situation appeared to have been brought under control,” the Daily Mail reported.

According to police, later that morning, around 3 a.m., cops were trying to stop someone on Washington Square North “for a violation,” when a man obstructed them. When the police tried to arrest the obstructor, he reportedly punched one of them, giving him a small cut inside his mouth and on his hand. The officer refused medical attention.

Police also reported that the previous morning, Saturday around 3 a.m., a young male punctured one of the front tires of an unmarked police vehicle inside the park. Cops are seeking the suspect on a charge of criminal mischief.

Sugar Barry, a Washington Square Association board member, shared with The Village Sun an excerpt from an e-mail by a neighbor, whom she did not identify, who did not find the Daily Mail article, or the raucous park scene, amusing.

“The park situation is outrageous and horrific,” the writer fumed. “This is a sample of what goes on almost every night, more so on the weekends.

“This article glorifies the situation by calling it a party and makes no mention of the constant attack on the police and vandalism of the park.

“This past weekend, these thugs hurled glass bottles at the police, physically attacked them, slashed their car tires and continued the pattern of harassment that has gone on since last May,” the neighbor said. “It is not safe for our community to have this blatant disregard for law and order. The police don’t deserve to be abused for trying to protect us. This has to stop.

“Additionally, the park is a mess,” the local lamented. “There are always bullhorns and amplified music played regularly, which has been so loud, I can’t hear my own TV even with my windows closed!

“The bikers and skateboarders are reckless and no one is enforcing any rules about public safety. There is graffiti, garbage and broken glass everywhere.

“I know there are cameras in and around the park,” the writer said. “We need to organize an appeal to our elected officials to take serious action…to take our neighborhood back.”