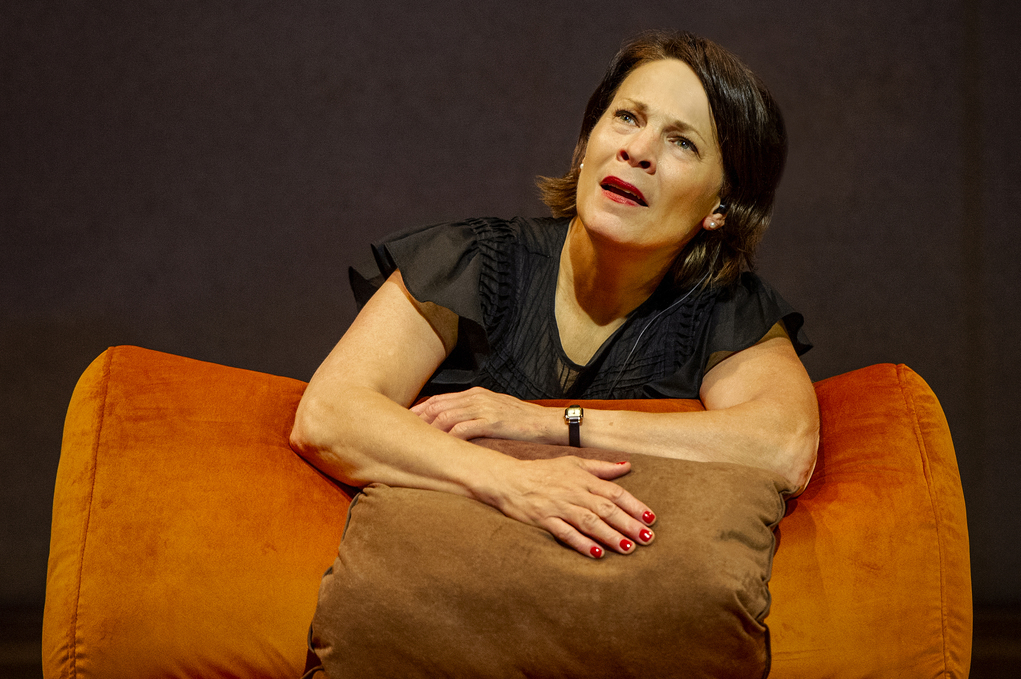 Wallace Shawn’s ‘The Fever’ is the perfect antidote

BY STEPHEN DiLAURO | It is impossible for me to imagine any other show being a more perfect antidote to the last however long it’s been than “The Fever.”

Those of you who have taken deep dives into personal development, astrology, Tarot and so forth, while wishing for more of everything that makes your life comfortable, please hasten over to the Minetta Lane Theater and wake up to the fact that everything is not exactly as it should be. Your life is “irremediably corrupt.”

That this message is delivered with emotional swings between perky positivity and dark, feverish remorse makes the unnamed monologist irresistible and able to achieve one of the evening’s underlying themes: Stories told live in a theatrical setting can enter us, can change us. “The Fever” is neither indictment nor harangue so much as it is a plea to awaken.

Lili Taylor delivers a brilliant, bravura nonstop 90 minutes. She fans the last glowing embers of reason is into a much-needed flame to help light our way out of the morass of self-serving delusion that is Western consumer culture. The biggest divide in the world today is between rich and poor.

The show opens with Taylor coming down the aisle and ascending to the bare stage wearing a surgical mask — putting her in solidarity with the audience. She removes her mask, and the lights stay up as she explains that she is the only character, and that the feeling of “when will this play end” could arise. (It doesn’t.)

She retrieves a very minimal number of set pieces from the wings — easy chair, side table, standing floor lamp and a candle. Then the lights go down and the entrancement begins. She settles on the chair to tell us a story in language that is scintillating and captivating.

Before she became feverish, she felt that her life and the lives of her urbane friends were happy and informed. They spoke brightly about cultural events. Her own life, she says with honest self-deprecation, would have made a “thin paperback.” Privilege and comfort do not beget depth of thinking.

She describes witnessing an execution, possibly in a dream, possibly in her visit to a country that has recently undergone a revolution. Then she recalls going to a nude beach and meeting a man who relentlessly denounced the rich and called for their abolishment. This was followed by a period of meeting person after person espousing similar philosophy. Details of feverish, surreal dreams dovetail with the reality of her awakening to the devastation that is poverty.

Let me digress from the show for a moment to proclaim that I have been a huge Wallace Shawn fan ever since seeing the film “My Dinner with Andre” when it first came out 40 years ago. I blush to recall how many times (eight) I watched it five years ago on YouTube in the run-up to beginning to write my new play, “Dinner with the Devil.” I was fascinated by the dialogue between two characters seated at a table. Now he’s done it again with a dramatic monologue.

In 1990 Shawn won an Obie for a version of this piece that he performed in people’s homes. I don’t know the motivation for having a woman deliver this monologue. But I’ll bet the feeling was that this language and these stories would be more palatable delivered by a woman in the current obstreperous testosterone-laden climate of political discourse.

As a man who is heartened at seeing the T-shirt and tote bag slogan “The Future Is Female,” perhaps I am projecting. In any case, Shawn remains one of our most important playwrights.

Now back to “The Fever.”

Our protagonist remembers meeting a revolutionary who told her a powerful story in a cafe. Then someone left a copy of Marx’s “Das Kapital” in a brown paper bag on her doorstep. At first it is impenetrable. Then she reads about consumer fetishism, and soon she is seeing evidence of it everywhere.

Her memories are passionate, nonlinear and at times she doesn’t trust them. The experiences and dreams that provoke the memories penetrated to her core, though. She cannot renounce them.

Taylor’s performance is deceptively captivating. She wrings laughs from the audience as she makes us aware that being happy doesn’t mean it’s O.K. to ignore the fact that poor people make possible most of what we enjoy for its material qualities and enhancement of all our lives — from iPhones to clothing made in sweatshops to harvesting the vegetables in supermarkets — as we live through the end of peak human comfort. When it ends, the poor might hardly notice.

Scott Elliot’s direction is undetectable, and thus impeccable. Arnulfo Maldonado’s set is dramatic, demanding and allowing. Qween Jean made an interesting choice for Taylor’s costume. It works. It immediately identifies her for who she is by virtue of her background. Sound and lighting function seamlessly.

I’m impressed that Audible, an Amazon company that distributes audiobooks, chose this as its first post-pandemic production in the theater it has spruced up to present solo shows that are recorded in front of live audiences and distributed to the company’s subscribers. Despite this evidence of good taste, Jeff Bezos’s wealth should be abolished.

Not exactly what your life coach is going to tell you, right?

It’s so great that live theater is back.

“The Fever,” by Wallace Shawn, directed by Scott Elliot, at the Minetta Lane Theater, 18 Minetta Lane, through Sun., Oct. 24. Eighteen performances only. For more information and tickets, visit minettalanenyc.com.