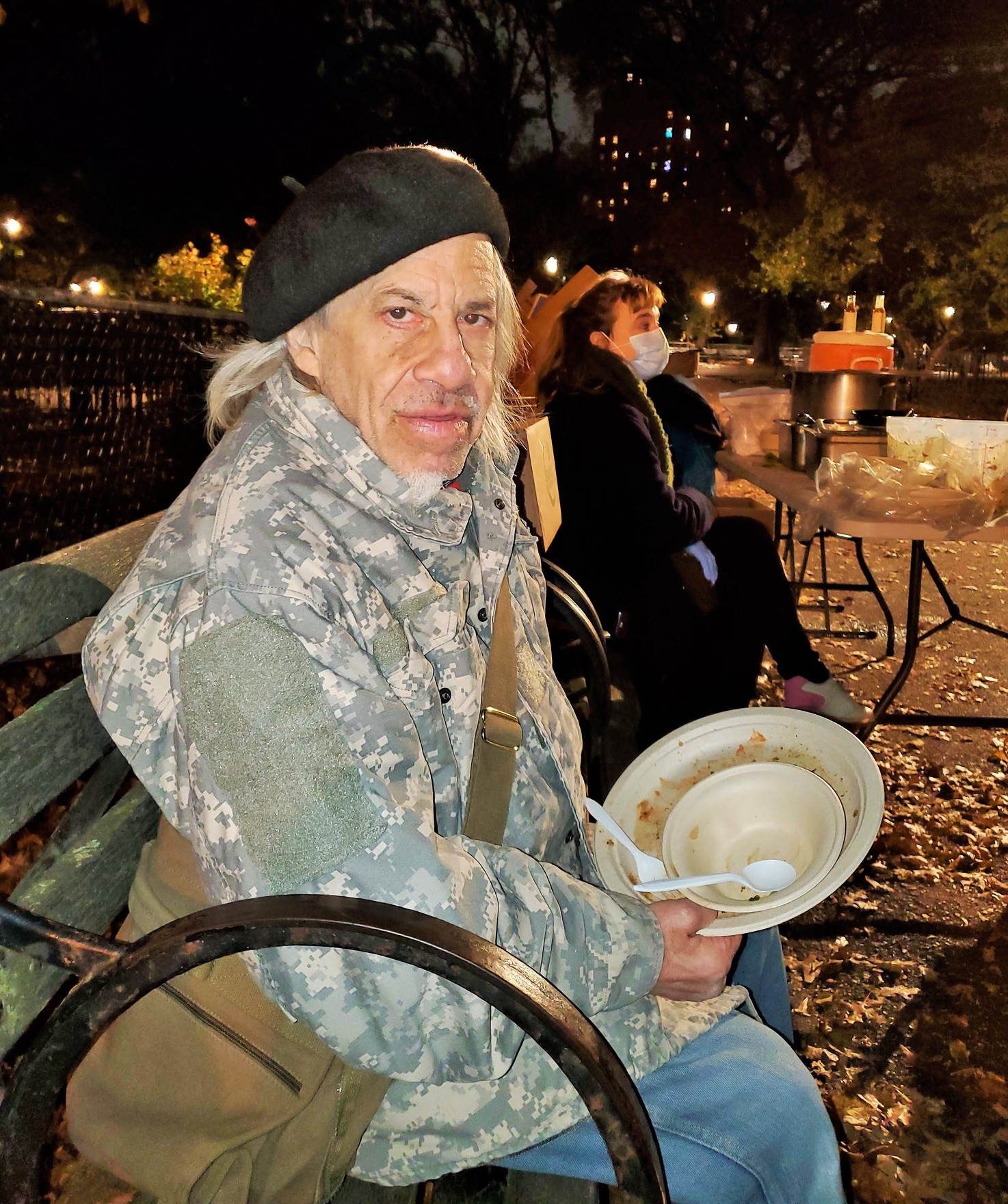 BY LINCOLN ANDERSON | Last Wednesday morning, police and other city agency workers cleared out the homeless tent encampment that had sprung up on E. Seventh Street outside Tompkins Square Park over the past couple of months.

Early Sunday evening a man who had been aiding the tent residents, and who said he was there when the action went down, shared with The Village Sun his account of what happened.

A 23-year-old E.M.T., he volunteers with the group Food Not Bombs, which has been giving sustenance and aid to the homeless at the East Village park. When The Village Sun bumped into him on this chilly evening after dark, he had just handed a blanket to a homeless man on a bench near the park’s entrance at Seventh Street and Avenue A.

Because police gave the volunteer a civil summons for allegedly guarding one of the homeless men’s tents on Wednesday, he said he did not want to give his name or have his photo taken.

“They gave me a write-up for littering,” he said. “They said I had left unattended property. I moved the tent like 20 feet away.”

He said two homeless men were arrested Wednesday, although police only had a record of one arrest.

“One of the guys didn’t want to give up his tent — they took him away in an ambulance,” he said. “One [other] homeless guy was moving another homeless guy’s tent across the street. They said he was stealing it.”

Asked for details on any arrests or summonses issued in connection with the “cleanup” of the tents on Wed., Nov. 10, police provided information on only one arrest. A spokesperson said that at 1:18 p.m. that day, police were “addressing a homeless condition” at the location and the following happened.

“Officers instructed an individual to remove his tent from a public sidewalk on Parks Department property,” the spokesperson said. “The individual refused to remove his property and leave the location after numerous lawful commands. The individual jumped on top of the tent, breaking the pole and scratching the passenger-side door of a nearby vehicle. The individual resisted arrest when officers attempted to place him in handcuffs. Once arrested, the individual was found to be in possession of drug paraphernalia.”

Abdurrashiyd Rivera, 54, of 40 Avenue D, near E. Fourth Street in the Lillian Wald Houses was arrested, according to police. He was charged with resisting arrest, obstructing governmental administration, criminal possession of a controlled substance and disorderly conduct.

Following the police action, the denizens of the homeless encampment on Seventh Street dispersed. None were apparently in Tompkins Square Park Sunday evening, and Seventh Street was free of tents.

Only a couple of the tent dwellers had been present when the police action started Wednesday morning, the E.M.T. said.

“A lot of these guys have jobs,” he noted. “That’s why they weren’t there to defend the tents. They were working or they were busking. At least one of the guys is a concrete pourer and played guitar around. He basically had a bad situation on the West Coast and came to New York to stay with family, who wouldn’t take him. There was no work because concrete work is seasonal, in warm weather.”

A handful of men put up the tents on E. Seventh Street but they let others stay with them, so probably around 20 people were in the structures on any given night, he said.

“It was kind of a safe gathering space,” the dedicated volunteer said. “It’s obviously preferable to have a tent than to be in a shelter where there are fights and people steal stuff. It’s the best option that these guys have, short of putting them in all the vacant housing the city has and the Airbnbs. The shelters are awful.”

He said the homeless created a community and looked out for one another.

“They help each other out. They care for each other,” he said. “When there are overdoses, they jump in, give Narcan, call 911.”

The young altruist, who lives in Harlem, moved to New York City four years ago. He said he was familiar with the history of homeless people in Tompkins Square Park and its Tent City in the early 1990s.

“Tompkins Square Park has been a big homeless area for decades,” he noted.

He said the people helping the encampment had been on alert after the Department of Homeless services started posting fliers saying a “cleanup” of the site was coming and ordering the homeless to collect their belongings and head to a city shelter. The past week, in particular, they had been on high alert.

“There was almost around-the-clock tension for that week,” he said. Members of the group Copwatch were also on hand, watching the police’s every move.

When it came, the man said, it was hard to watch the eviction of the tents.

“The police, about a dozen, came by with two or three Department of Homeless services workers just to give them cover,” he said. “They literally went tent by tent, and either would arrest the occupants or, if they were empty, throw everything into the garbage truck.”

He insisted that a man he saw being arrested was not a drug user, saying, “He’s clean. I know him.”

Some locals’ reactions were very disheartening, he said.

“We had pedestrians coming by cursing us, saying, ‘Good, I’m glad they’re taking the tents away,’” he recalled.

Before the cleanup, volunteers had noticed some locals clearly putting on the pressure to kick out the tents.

“We could see neighbors calling cops, taking pictures,” he said. “And there was a woman who lives in one of these buildings who tried to flex on us and said, ‘I’ve lived here for five years.’ Some of these guys have been living on the streets longer than that. The gloating by some of these people, that was bad. It was just sad. There were people that were laughing.”

As they do every Sunday night, Food Not Bombs was feeding people in the park just past the chess tables area, where the man was speaking to The Village Sun. This night they were dishing out white rice, pinto beans, savory veggies and asparagus soup.

Karl Rosenstein, a former East Village squatter who now lives in Harlem, came by for the meal, as he often does on Sundays.

Asked his thoughts on the tents’ eviction, he said he formerly had been homeless himself and lived in the park.

“The homeless gotta live somewhere,” he said. “That’s how I felt way back when. I lived in the park, ’90 and ’91. Most depressing winter of my life. We had fire barrels back then. That’s how we kept warm. I didn’t have a tent. I slept on a bench — with a fire barrel.”

A Brooklyn native, he held a number of jobs over the years, from waiter and busboy to messenger and “unloading semis.” A Trotskyist, he thinks communism holds the answer for solving homelessness, taking care of the people who fall through capitalism’s cracks.

“Guaranteed jobs and shelter” are what’s needed, he said.

A Food Not Bombs volunteer ladling out soup said the new concern is that D.H.S. has now posted a “cleanup alert” poster inside the park by a spot a bit farther down the path where homeless people are camping out on the benches.

“So we’re worried they’re going to come for them,” she said.

“I knew a lot of them,” she said of the guys who formerly had been living in the E. Seventh Street tents. “Joshua, Johnny, Chris, Sleigh, Edvin and his brother Tony — I don’t know if they were brothers or they said they were brothers.”

An IOS developer for Apple, she has volunteered in the park feeding the homeless and needy for six years. She regularly brought pastries and bagels to the group recently living in the tents. She, too, said she didn’t want to give her name or be photographed.

Police also last week moved a man out of the park’s southwestern corner where he had been sleeping on a bench under a blue tarp, on top of which he sold used books.

“Jeff, he had the bookstore, they kicked him out Friday,” she said. “I think he’s trying to relocate with Lisa to St. Mark’s, but I’m not sure.”