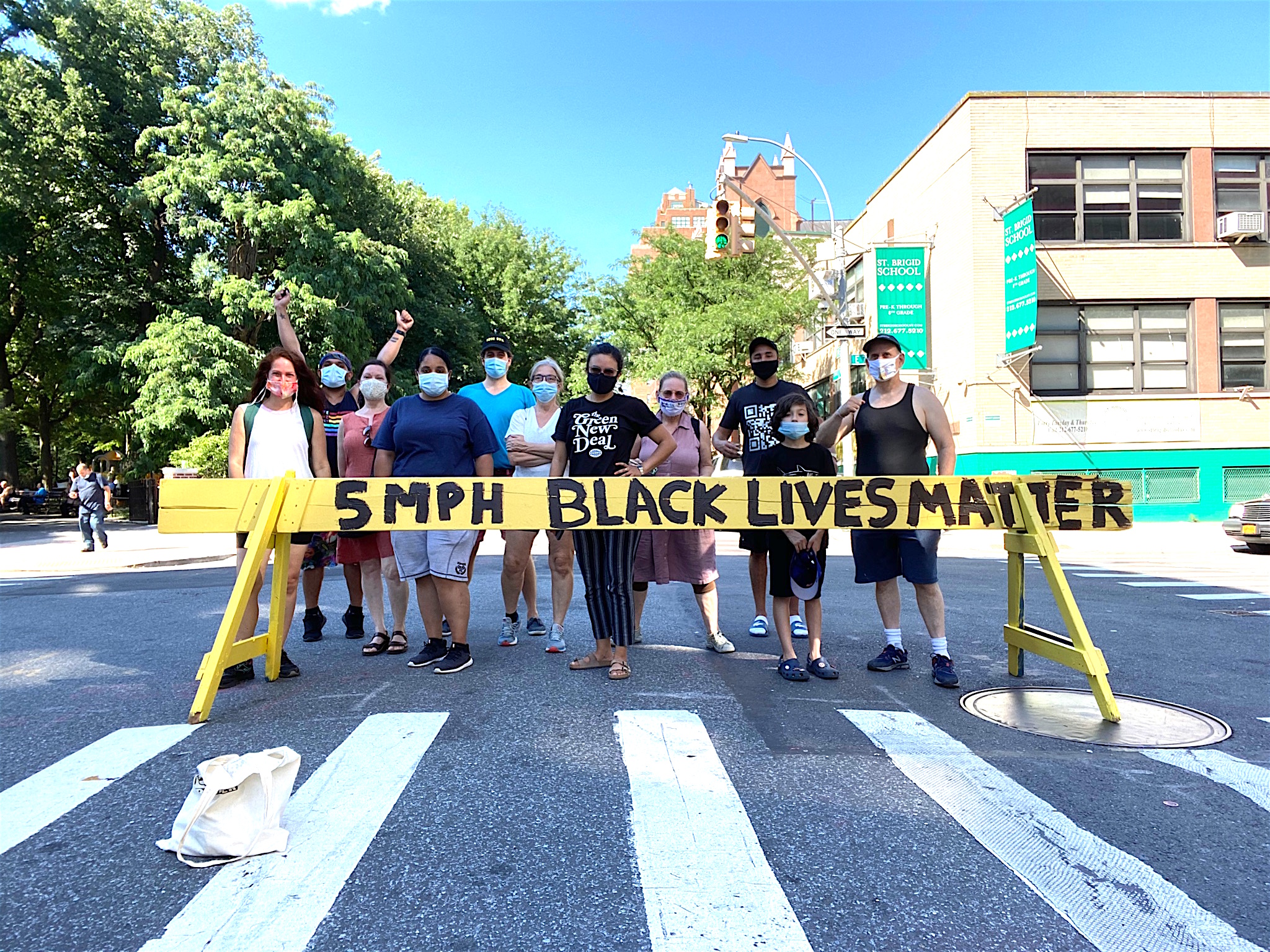 BY ISAAC SULTAN | Buoyed by the efforts of a new local community group, Avenue B is starting to look a bit like the free-flowing European streets of Barcelona.

A segment of the East Village avenue has been closed to traffic from 8 a.m. to 8 p.m. since late May as part of Mayor de Blasio’s Open Streets plan. Under the initiative, the city’s goal is to open 40 miles of city streets to allow for greater social distancing during the COVID-19 crisis.

Sawhorse barricades placed at intersections from E. Sixth to E. 14th Sts. are meant to deter motorists and cordon off space for pedestrians to walk freely. Cars and delivery trucks are technically permitted on the avenue, but only at 5 miles per hour and not as through traffic. Emergency vehicles are also allowed.

With residents cooped up inside during quarantine, clearing out car traffic offers a more responsible way for New Yorkers to get outside, rather than crowding onto narrow sidewalks and into congested public parks.

“As the weather gets nicer and this unprecedented crisis stretches on longer, we need to do everything in our power to keep our neighbors safe and healthy,” Council Speaker Corey Johnson said in a statement.

In theory, the plan would function smoothly — but, of course, it seems like nothing can go absolutely right in 2020. On Avenue B — and across the city — police have been criticized for repeatedly neglecting or forgetting to put the sawhorses back into place in the mornings, basically undermining the whole idea of the Open Streets plan. Moreover, motorists, whether intentionally or not, have damaged some of the barricades, or even simply decided to move them to the side and then drive right through, again defeating the purpose of the plan.

Community leaders in the East Village and Lower East Side asked the Police Department to replace the flimsy wood sawhorses with metal barricades only to be told all the available metal barricades were being used to protect the Seventh and Ninth precincts in the wake of recent protests.

In light of these issues, the newly formed Loisaida Open Streets Community Coalition has taken matters into its own hands, doing what it can to ensure that Avenue B’s Open Streets are safe and effective for pedestrians and motorists alike.

Each morning, two volunteers from the coalition head out bright and early to move the sawhorses into place. Another set of members check in midday to check that the barriers are still in position. Finally, the barriers are disassembled at 8 p.m.

Members even hosted a “painting party” to decorate the generic blue N.Y.P.D. sawhorses. The result was a series of beautifully hand-painted designs adorning the barricades that include helpful reminders for drivers to adhere to the 5 mile per hour speed limit.

“We’re residents, stakeholders, volunteers. We don’t get paid to maintain barricades. We do this because we are invested in the beauty & safety of our #LES,” District Leader John Blasco posted in a Tweet Wednesday morning.

“People have lost their lives… . These stops and starts are where the seconds matter,” Spillane said. “I get it for public enjoyment, but this is public safety.”

In response, Blasco proposed a host of creative solutions to protect Open Streets while not impeding firefighters. The proposals included the introduction of a northbound lane reserved for emergency vehicles or the removal of parking to give even more flexibility. Spillane was receptive to the ideas.

In the end, the committee amended a resolution to ask the city’s Department of Transportation to consider extending Open Streets even further south, to E. Second St., provided that the Fire Department’s needs are accommodated.

For the foreseeable future, the designated strip of Avenue B will remain car free, but Blasco hopes initiatives like Open Streets that carve out accessible public space will continue to exist, with or without a global pandemic.