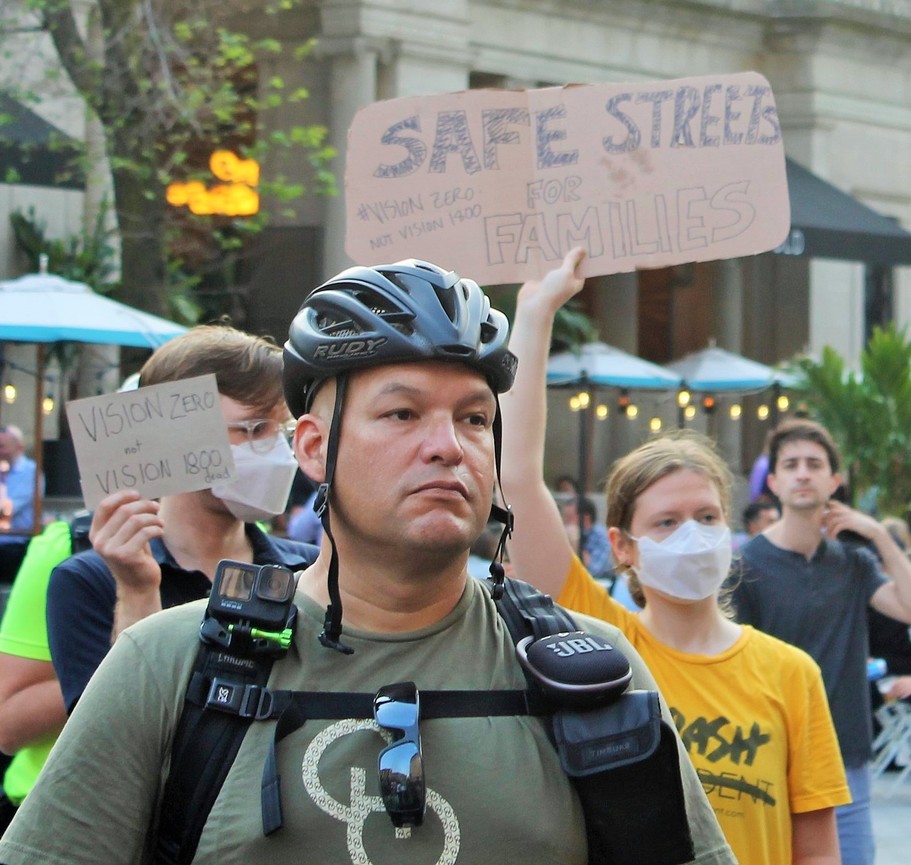 Cyclists joined victims' family members and friends at Union Square last week at a protest against the spike of traffic crash deaths of cyclists and pedestrians. (Photo by The Village Sun)

BY LINCOLN ANDERSON | Transportation Alternatives is through with Bill de Blasio.

The mayor and TransAlt, onetime allies in the quest for Vision Zero — zero traffic fatalities and serious injuries on the city’s streets — are no longer on the same page, according to Danny Harris, the pro-cycling and pro-pedestrian group’s executive director.

“We’re looking toward the future,” Harris told The Village Sun after a press conference at Union Square last week.

By “the future,” he clearly meant the next administration and next mayor, likely Eric Adams.

Outrage from TransAlt and cyclists recently boiled over after a weekend that saw drivers take six lives, killing a baby on the sidewalk in Brooklyn, a cyclist and a pedestrian on the Upper West Side, a teen on a moped in Queens and two motorcyclists in Queens, plus critically injuring at least two pedestrians and a cyclist.

After that weekend of Sept. 11-12, the total number of people killed in traffic crashes in New York City in 2021 rose to 188. Since Mayor de Blasio took office nearly eight years ago, traffic crashes have killed more than 1,800 people in the city.

While pedestrian deaths, on the one hand, have steadily declined since 2013, the same steady progress has not been seen, despite some dips in earlier years, in the annual numbers of deaths of cyclists, car drivers and motorcycle riders.

These grim figures are unacceptable to TransAlt.

“We’re heartbroken and furious by [sic] the deadly and daily occurrence of traffic violence on Mayor de Blasio’s streets,” Harris said. “The deadliest year under Mayor de Blasio’s tenure shows no sign of letting up.

“You’re our mayor! Do something!” he demanded. “Shame on you, Mayor de Blasio! Vision Zero isn’t failing — you’re failing! This mayor promised us Vision Zero by 2024. We’ve now experienced the most deadly month since this [effort] started.

“The driver who killed the three-month-old had amassed more than 160 traffic violations, including 91 school-zone speeding violations,” he said. “This driver should not have been on the road, period.”

For its part, TransAlt says the way to make the streets safer is through infrastructure changes — chiefly, “repurposing” a quarter of the roadways away from car use.

“We need our next mayor and City Council to chart a new path forward for New York City built on safe streets for people,” the TransAlt leader declared. “Our leaders must implement the vision of NYC 25×25 and repurpose 25 percent of our streets to better use by 2025. This must include opening streets to people, redesigning dangerous corridors, and building safer streets across every corner of this city that put pedestrians, cyclists and transit riders first.”

There are also two legislative approaches, however, that could help make a difference.

For one, Assemblymember Harvey Epstein, who was among the roughly 250 people at the Union Square press conference, said school speed-camera tickets should count the same as “cop-issued tickets,” in terms of negative points on a driver’s license.

“For speed cameras, you don’t get points,” he told The Village Sun.

There is pending legislation in Albany that could rectify this problem, he noted.

The press conference’s organizers did not allow politicians to speak on the microphone, which one speaker said was why “no politicians” showed up. However, along with Epstein, who held his bike helmet in hand, was his chief of staff, District Leader John Blasco, and Jacob Priley, state Senator Brad Hoylman’s chief of staff.

On the city level, the Dangerous Vehicle Abatement bill, passed last year, allows the city to impound vehicles of drivers with 15 or more school speed-camera violations or five or more red-light camera violations during a 12-month period, unless the driver completes a “driver accountability course.” However, it turns out, this program was not being funded.

Family members and friends who have tragically lost loved ones to traffic crashes lashed out at the mayor and politicians, saying only immediate action — not empty words — will finally make the streets safe.

As one speaker put it, fatal crashes occur “because the driver refuses to wait one second — to get where? Nowhere. Who knows [where they’re even going]?”

Debbie and Harold Kahn lost their son, Seth Jay Kahn, in November 2009 when he was struck from behind by a turning M.T.A. bus as he was crossing the street at Ninth Avenue and 53rd Street. They said the bus’s operator had been fired for texting while driving but that the union got him reinstated after a week of retraining. It was the driver’s first day back on the job.

Seth, who was a month shy of 23, was studying toy design at F.I.T. He was their only child.

“When we started this fight, we were making gains,” his mother said of the Vision Zero quest. “Then it reversed. That hasn’t happened in the rest of the country.”

At the rally’s conclusion, a cyclist in the crowd started a chant, shouting, “What do we want?” eliciting the response, “Safe streets!”

“When do we want it?” he shouted. Everyone else shouted back, “Now!”