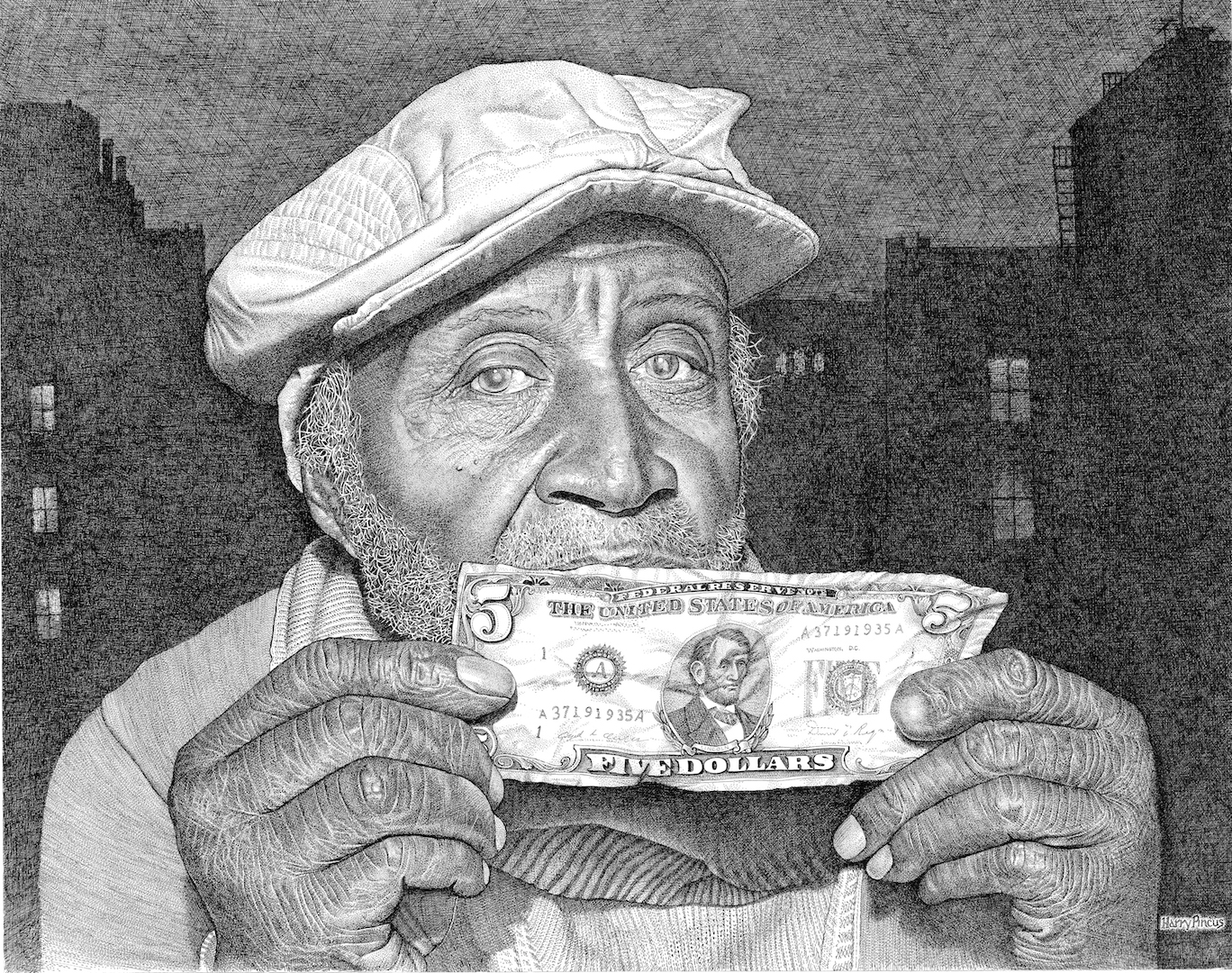 This illustration, “The Five Dollar Flop,” is named for the cost of a caged booth in a Bowery flophouse 40 years ago. The writer had a friend, Lance, descended from South Carolina’s Gullah Island people, who lived in an old bed up on the writer’s roof, in the bulkhead. One evening, Lance came by with the old man in the drawing, and asked if the writer could help put him up, too. There was no more room, so the writer gave him $5 for a night’s flop on the Bowery. "He had such a beautiful face," the writer recalled, "that I asked if I could take his picture. And when he held up the $5 bill, I thought that the face of Lincoln was ironic. I did the drawing from the photo I took that night." (Illustration by Harry Pincus)

This lovely spring evening is rather unusual, however, as thousands of demonstrators, wearing masks, have just marched past our window, chanting “Black Lives Matter!” Uh oh, here come the cops. And the helicopters.

Aside from what I know from the life I have lived, and what is in my heart, the basic facts are easy enough to come by.

This means that young Ashley, Tyler or Dylan can trip around from bar to bar all night long with impunity, while reeking of pot, just as a young man of a similar age, on his way to work for a minimum wage, is far more likely to be thrown up against a wall and searched by an officer of the law, if he happens to be a person of color.

The resulting degradation and alienation can only be surmised by a white person. We will never know what this feels like. Never.

The effects of disease in prisons, however, has been measured by the NAACP, and 15 percent of jail inmates, and 22 percent of prisoners, compared to 5 percent of the general population, reported having tuberculosis, hepatitis B and C, H.I.V./AIDS or other STDs, and of course, these facts pale beside the overriding reality of the pandemic. Imagine being locked in a prison with that!

So the effects of incarceration also reduce the likelihood of a callback for a job by 50 percent, and the impact of a criminal record is twice as large for African American applicants, according to the NAACP.

So what is being done? The Bard Prison Initiative is a singular project which provides a college education for prisoners, but it is merely a single ray of hope and enlightenment. Jesse Jackson noticed long ago that it costs less to send a student to Penn State, than to State Pen, but too little is being done for those who have already been condemned.

Yes, the prison business is most certainly thriving in this country, and spending has increased at triple the rate of spending on pre-K-through-12 public education over the past 30 years. In fact, the United States has 4.4 percent of the world population but 22 percent of its prisoners!

Those are the facts, but what do we know in our hearts? What do we feel when we see the homeless trying to sleep on a subway car, or turn on the evening news and see a cop chase a black kid into his own home, and shoot him dead. This kind of atrocity reached an apotheosis of evil, just  the other day, with a single murder in Minneapolis.

Most white folks tend to change the channel. Not to look for too long at the tears, or listen too hard to the wails and the agony. It’s not our job. We can’t do anything.

In truth, I’ve come a long way from my own rad beginnings, when we shut down Hunter College after the Kent State shootings, and marched around Park Avenue shouting, “Power to the People! Off the Pigs!” I didn’t even know what I was shouting. As alienated as I was, I never wanted to off any pigs, or bomb anything. My parents taught me to respect my elders.

Even though my father, a subway conductor, told me of cops who boasted of beating up black men in the precinct basement, he also taught me that all cops weren’t like that. In fact, his friend Arthur the Cop, another handball player at the public courts in Coney Island, was a hero, who twice jumped into the Hudson River to save the lives of people who were trying to commit suicide. Arthur went on to study gang behavior, and teach at John Jay College.

My father, a critical socialist, called Arthur the Cop “the greatest man I have ever known.” There may not be many as good as Arthur, but there are certainly legions of policemen and policewomen who risk their lives every day, and try to make the world a better place.

But can the police be expected to do any more than reflect the inherent racism of our society? Well, when it comes to lethal force, I guess the answer is that they had better!

I’m reminded of an old R. Crumb cartoon, which begins in the Summer of Love, with  three hippies, hoarding a joint, as a cop approaches. “Pig!” mutters one of the hippies. The next panel takes place 10 years later, and the three hippies are “businessmen” in three-piece suits. A black man walks by, and one mutters, “Where’s a cop when you need one?”

Hundreds of years of racism and inequality are not going to disappear overnight. Those of us who naively thought we could pull a lever and end racism, when we voted for Obama, were wrong. This is going to be a long, and grinding process, with terrible setbacks, like that which we are experiencing tonight.

Sadly, the worst element in this unfolding tragedy is the current president of the United States. Isn’t it unusual to meet someone who appears to have absolutely no redeeming values?

We have a president who is the embodiment of a demagogue, defined as “a political leader who seeks support by appealing to the desires and prejudices of ordinary people rather than using a rational argument.” He may also be defined by the word “sociopath,” which is “a person with a personality disorder manifesting itself in extreme antisocial attitudes and behavior and a lack of conscience.” The definition of “racist” is “a person who shows or feels discrimination or prejudice against people of other races, or believing that a particular race is superior to another.” Bingo! That also fits. So this is our president, and how galling, how insulting, is that?

I certainly hope that everyone will vote for Good Joe, Decent Joe, the anti-Trump. Even if our candidate were a paper bag that says “Not Trump,” we should vote for the paper bag!

Yet I’m worried that the justified explosion of anger, which has arisen out of the public murder, the pandemic, the economic inequality and the constant goad of a racist president, has now degenerated into a crime wave of looting and burning, which could result in a backlash that only helps reelect Trump.

Every demonstrator must realize, before they resort to violence, or petty looting, that they are not only representing a cause greater than themselves, but they are representing their mothers, their fathers, their aunties and all of the people of their community who have felt the brunt of racism. If those sneakers look good, or that television is just sitting there waiting to be taken, just remember that you will have to live with the dishonor of the moment for the rest of your life. It’s not worth it.

A noble servant can hold his head higher than a dishonest thief any old day. Unless you aspire to be like the criminal you despise, just remember, you’re better than that.

Pincus is an award-winning illustrator who lives in Soho.