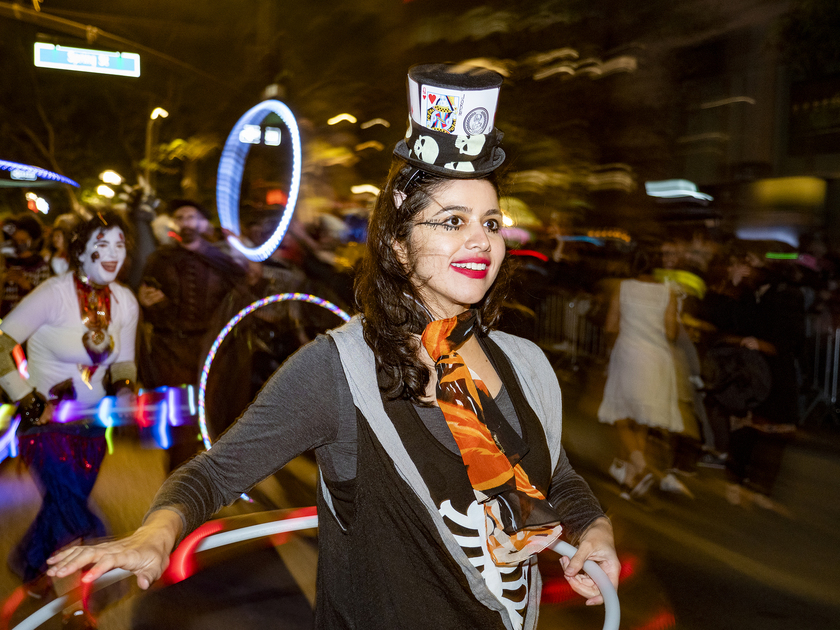 BY THE VILLAGE SUN | The Greenwich Village Halloween Parade was back in rousing, high-energy form Sunday evening after last year’s installment was canceled due to COVID.

The marchers, floats and giant puppets in the colorful stream of costumed creativity wended their way along Sixth Avenue from Spring Street to 16th Street.

In addition to viral video spoofer Randy Rainbow, who was the affair’s grand marshal, Arthur Schwartz, a Village Democratic district leader and activist attorney, was the event’s deputy grand marshal. Two years ago after a man claiming to be a parade board member sued the event over mismanagement, threatening to block it from happening, Schwartz countersued on the parade’s behalf. A judge eventually dismissed the original lawsuit.

Also among the parade revelers was Hudson Yards-area activist Marni Halasa, who, like Schwartz, ran in the June Democratic primary for City Council District 3, which was won by Erik Bottcher. She and a fellow figure-skating teacher friend both glided around on inline skates.

“She was a rainbow unicorn and I was a mermaid,” Halasa said, giving a quick recap of her parade experience. “I did have a sign — ‘Angry Mermaid for Climate Justice’ — but lost it in the beginning of the parade, which was a comedy of errors including three costume malfunctions, as well as a skate-wheel mishap which I fixed on the fly. But everything miraculously worked out and we had a fabulous time — because of course, the show must go on!”

This year there was a Lil Nas X “Montero” giant puppet to go along with the usual group of zombies stomp-dancing to Michael Jackon’s “Thriller,” always a fan favorite. There were Chinese dragon puppets, rock bands jamming on floats, lots of naughty nuns, tons of superheroes and fake blood galore, plus costumes about COVID vaccines, of course, and other topical issues.