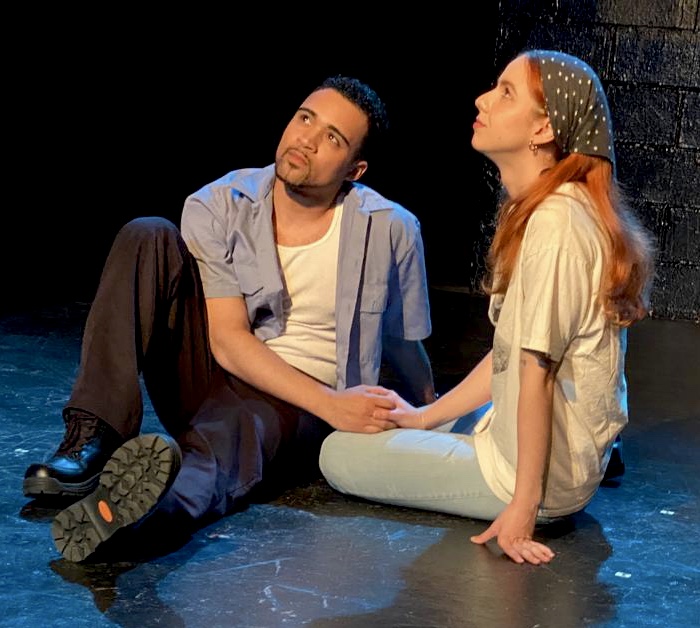 BY RACHEL de ARAGON | Theater for the New City, a charming little venue in the East Village, has a knack for bringing new talent into the room with seasoned Off-Broadway and Off-Off-Broadway performance artists.

In a tradition well represented in Elizabeth Ruf’s direction, “Room with Stars” is another such victory. This is a Vietnam War-era slice-of-life drama. Writer Nina Howes and Ruf bring a cross-generational look at the role of social activism in the lives of young people.

The stage is empty. The brick walls of the performance space are used to create the setting. On a roof in the East Village, a young girl, Samantha (Alice Heber Martins), shouts out her adolescent hopes to the “Moon Goddess.” A Richie Havens song plays in the background. The room with stars is the roof, and its ceiling is the night sky.

As her voice calls out, her boyfriend, Steve (Jon-Paul Ruiz), joins her on the roof. They are on their way to a concert to hear Latin rhythms at the Academy of Music, filled with giddy excitement and charmed by each other.

The pair’s banter soon reveals that Sam will graduate high school in a month and that Steve is employed as a mechanic. They are filled with the hopes of a young couple exploring the possibilities of the future. Sam is planning for college. Steve has decided that he will join the armed forces. But it is 1967, and the war in Vietnam is spiraling into a larger and larger conflict.

For young people in those years the war loomed large. It impacted many of their life decisions and influenced the formation of their social values.

Howes’s script gives us a nice glimpse into the atmosphere of time and place. Director Ruf also designed musical clips — queued by Karl Bateman (board operator) — which augment the ambiance through Sam’s ever-present portable radio.

It was a time when the young could see no place for the innocence and optimism that they had been raised to believe was their social reality. It was a time for action, for choices, for questions and for answers.

The generational divide mirrors the rift between the young couple. His Aunt Angelina (Yesenia Ortiz) is a social worker and advocate at the pacifist Catholic Worker organization. With a snappy bravado, and a song, she explains her life. Her own struggles as a young girl, a migrant from Puerto Rico, led her to believe it is important to stand up for justice.

Steve sees no point in her need to “change the world.” Aunt Angelina becomes a source of guidance for Sam.

Sam’s mother, Rosina (Ruf), is a traditional, working-class Italian-American whose focus has always been her home and family. Rosina is a widow. Financial necessity has forced her to work in a retail store to support her daughter. Her daughter means everything to her. With anger and tears, she struggles to understand the choices Sam is making.

The relationship between the generations is filled with palpable tension. The experiences of the older generation provide limited support to the young.

Ruf gives us a truly poignant moment as she and her daughter reach across the household tasks they share to understand each other’s lives. Each of the young people goes off to pursue their own idea of what “makes most sense” to insure a better future. The times offered extreme choices. They are choices that can lead to jail for Samantha and an early death for Steve.

Although “Room with Stars” is a slice of life from more than half a century ago, the choices and conflicts remain. Like those in the past, the present generation struggles to find a better future. Is the path best found through advocating for social change? Is the quest for personal security the most secure road? I left the theater feeling that theater itself gives us some answers. As an audience, we revisit the eternal questions and, in every generation, we look for the answers.

“Room with Stars” (running time 90 minutes), by Nina Howes, directed by Elizabeth Ruf, is playing through June 19 at Theater for the New City, 155 First Ave., at 10th Street, Thursday, Friday and Saturday at 8 p.m., Sunday at 3 p.m. All patrons must be vaccinated. Tickets $18; students and seniors $15.