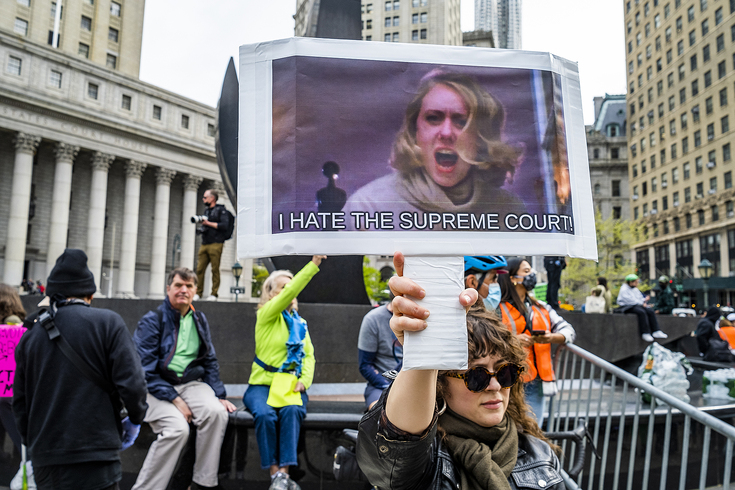 Pro-choice protesters marched down to Foley Square, above, from Union Square on Sat., May 14. (Photo by Milo Hess)

The U.S. Supreme Court is expected to issue its ruling on abortion soon — sometime before the end of this month, when the court breaks for summer recess.

Protesters at the May 14 pro-choice rally in Union Square share their feelings about the possibility of Roe v. Wade being overturned. (Video by Jasmine Shiffer)

Demonstrators at the May 14 Downtown protest called for “abortion on demand and without apology!” Their views and the views of millions of Americans — a majority of the country, in fact — haven’t changed since then. Meanwhile, the high court’s monentous decision looms ever closer.

“We Refuse To Let the Supreme Court Take Away the Right to Abortion! Forced Motherhood = Female Enslavement,” The Action Network said on an organizing page for last month’s event.

“A leaked draft memo from Samuel Alito on May 2 indicates the intention of the fascist majority on the Supreme Court to overturn Roe v. Wade,” the page said. “This is an ATROCITY, but it is not yet law and doesn’t have to become law. It is what they are on track to do IF WE DO NOT STOP THEM.

“NOW IS THE TIME TO TAKE TO THE STREETS & RISE UP 4 ABORTION RIGHTS!

“The end of Roe v. Wade would be one of the most significant reversals of a fundamental human and civil right in this country’s history.

“If you care about women and girls…if you refuse to inherit, or pass on, a world that is hurtling backwards. Get organized and connect with us. Spread the word to friends, family and other networks. NOW is the time to rise up, together, as if our lives depend upon it — for, in fact, they do.

Meanwhile, protests are ongoing outside Supreme Court justices’ homes as activists hope to pressure the judges not to overturn Roe v. Wade. The New York Post reported that on Wednesday a 26-year-old California man was arrested with a handgun outside Brett Kavanagh’s Maryland residence. He reportedly had a suitcase and backpack containing “a small arsenal, including a tactical police vest, a tactical knife, pepper spray, zip ties, a Glock 17 pistol and two magazines and ammunition.” The man was reportedly charged with “attempting to kill or kidnap a U.S. judge.”