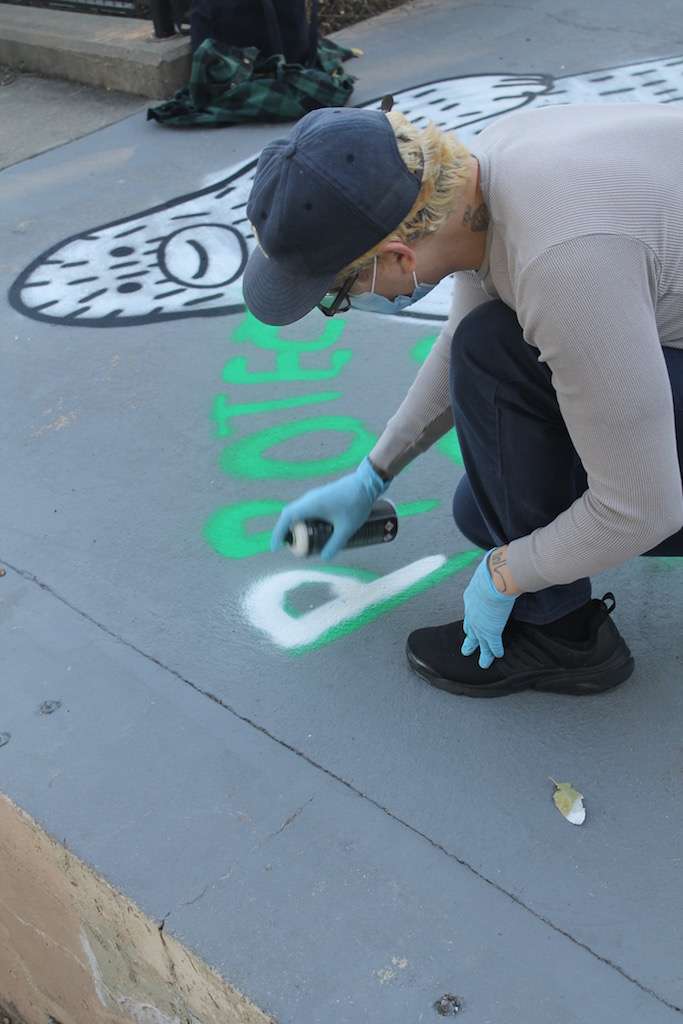 Brandon Sines painted one of his Frank Ape figures during the Art Attack. (Photo by The Village Sun)

The Art Attack on the East River Park amphitheater was short but sweet.

Late on the afternoon of Fri., Oct. 9, a group of artists and graffiti writers festooned the Corlears Hook cultural structure with colorful imagery and messages of resistance and “park power.”

But by the next morning Parks Department workers were already busy blotting out the explosion of creativity, painting over it on the amphitheater and power-washing it off the plaza surface behind.

At least videographer Harriet Hirshorn of East River Park ACTION was able to document the Art Attack while it was happening.

The idea behind graffiti-bombing the amphitheater had been to slow down the East Side Coastal Resiliency project by dint of the Visual Artists Rights Act of 1990. Under VARA, artists must be given a 90-day notice if their public artworks are in the way of a project, so that they have time to relocate them.

Set to start next month, E.S.C.R. would raise the park 8 to 9 feet, so it would be above the floodplain, to protect the surrounding area from flooding by a future Sandy-level storm. But to do so, the existing historic park and nearly 1,000 of its trees would be destroyed as the park would be buried under tons of new dirt.

East River Park ACTION supports “the green alternative” or, in other words, the original flood-protection scheme, which the city unilaterally replaced with E.S.C.R. The initial plan simply called for an earthen berm to be built along the eastern side of the F.D.R. Drive, with the park left at its current height.