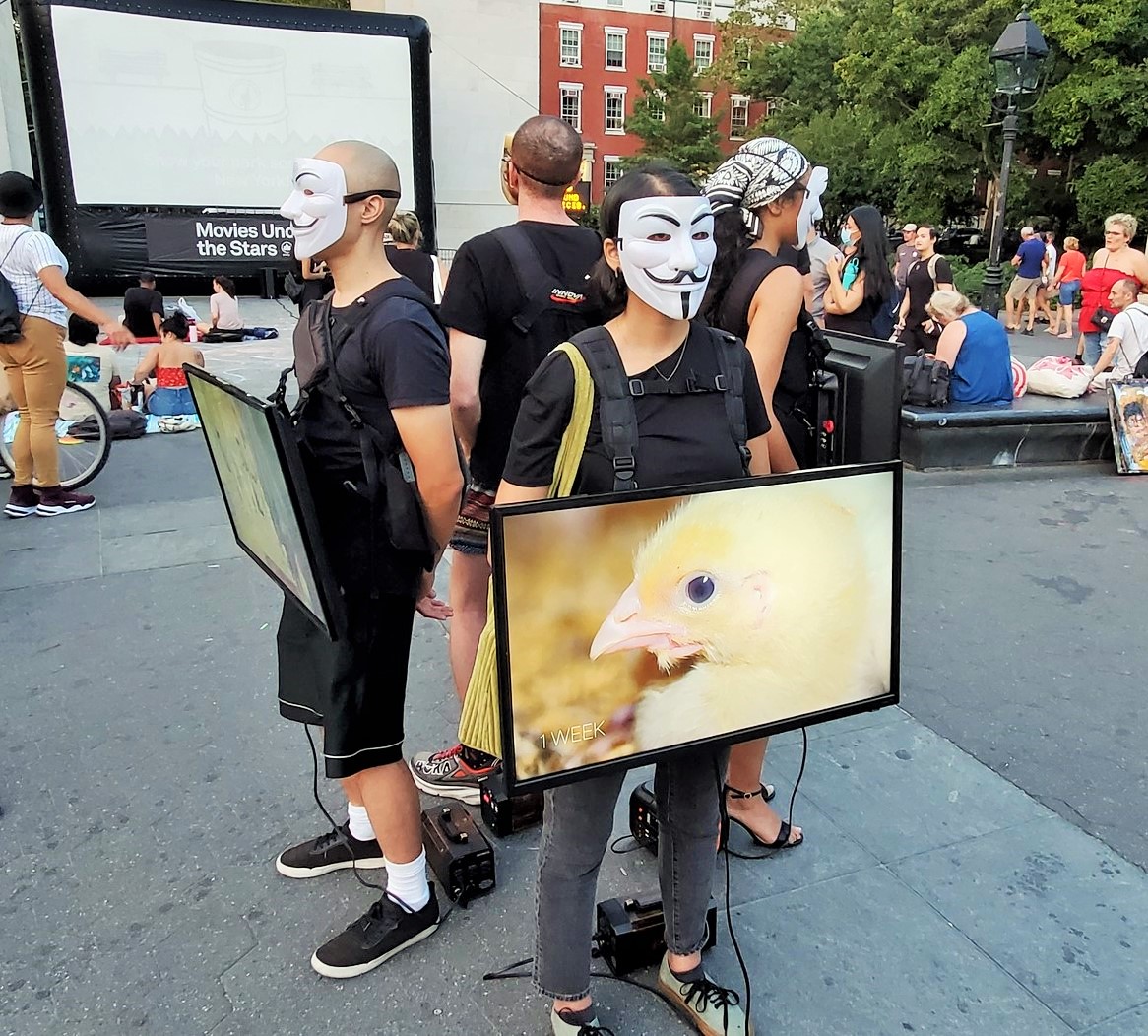 Members of Anonymous for the Voiceless showed images of animals in the food industry. (Photo by The Village Sun)

Vegans: We speak for the victims

BY THE VILLAGE SUN | A group of vegan activists in Washington Square Park recently definitely gave some food for thought.

Called Anonymous for the Voiceless, four of them stood silently with their backs to each other, all wearing Guy Fawkes “V for Vendetta” masks. Each facing a different direction, they held up large flatscreens showing graphic video images of the animal-food industry.

Miyanth Vidi, 26, another member of the group, made a strong argument for going vegan — meaning not eating or using anything derived from animals.

He quickly debunked the biblical concept that humans have “dominion” over all the Earth’s creatures.

“People usually say, ‘Animals are not intelligent,'” he noted. “But if I find a human who is not as intelligent, can I slaughter him?”

Getting sufficient protein is also not an issue for vegans, he said, explaining, “We’ve got lentils, we’ve got seitan — vital wheat gluten, nutrient-dense protetin.”

Being a pescatarian is not an acceptable option, either, for Vidi and his comrades.

“Fishes feel pain,” he said. “It was dragged out of the ocean by force.”

Another benefit of veganism is that less food needs to be cultivated to sustain animals in the food industry.

“We’re feeding so much food to animals,” he said. “We can solve world hunger. We can solve the water crisis. Eighty percent of all Amazon deforestation is to grow food to feed animals.”

Vidi, who lives in New Jersey, has been vegan for more than two years

“I’m in the best condition of my life,” he enthused. “I wish I had been vegan before. I’m an actor, so I’ve got to be in tip-top shape. I cook a lot of my own food.”

Paola Smith, another organizer with the group, answered still more questions — and was just as persuasive as Vidi. She spoke of the “meat, dairy, egg industry…[animal] experimentation…down, fur and leather. These are things that people have choices to make about every day of their lives. The industry has paid trillions of dollars to keep these animals and practices hidden.”

So-called free-range eggs are not innocuous, she said.

“They’re all in a big shed,” she said of the chickens, “all squashed into each other. They get to the point they can’t walk anymore; they get heart failure.”

But it’s the ethical reason that is the most important, in the vegans’ view.

As Smith put it, “When you look at it from the victims’ perspective, it makes it so much easier to change your decision. … You think, ‘Wow, someone’s dying.'”