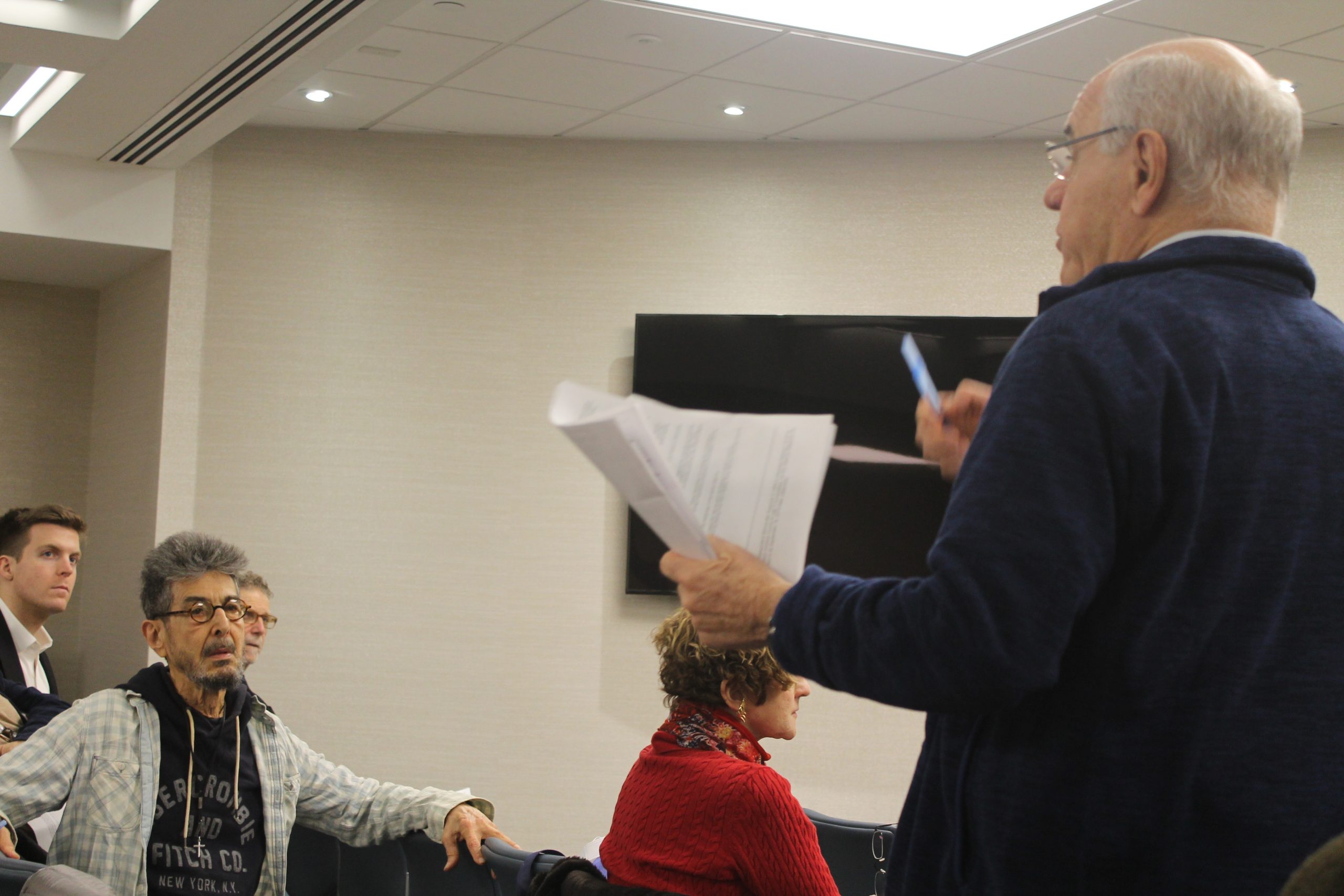 BY LINCOLN ANDERSON | Like many fellow party members, seemingly, across the country in this presidential season, the Village Independent Democrats, as a club, don’t feel ready to commit to a candidate quite yet.

Last Thursday, the storied political club voted on whether to back one of the many contenders still in the running. In the end, though, the winner was “no endorsement.”

V.I.D. is leaving itself the option of holding another endorsement vote in March, which is closer to the New York primary, scheduled for April 28.

Before the vote, club members, in one-minute speeches, pitched the merits of their preferred candidate or, in some cases, advocated for not backing anyone — yet.

Elizabeth Warren had the strongest show of support among those who did endorse a candidate, winning 11 votes. Pete Buttigieg garnered five, Bernie Sanders got three,

Amy Klobuchar took two, and former Mayor Mike Bloomberg got 1. But the 24 “no endorsement” votes topped the 22 for all the candidates combined.

Club President David Siffert kept the speeches moving along briskly by rapping a large brass bell like a gong after each minute was up.

Alec Pruchnicki led off by speaking not for but against a candidate. He said Bernie Sanders would be the best pick, if not for his health issues.

“Bernie’s more progressive,” he said. “He’s better on single-payer health insurance. But he just had a heart attack. And if he has a health issue, the Republicans and the Russians hackers will be on him like they were when Hillary stumbled.”

A club member who identified herself as a Klobuchar delegate, said the Minnesota senator has the right stuff.

District Leader Arthur Schwartz, who was Sanders’s New York State campaign counsel in 2016, not surprisingly, advocated for him once again.

“I think people should think about what V.I.D. stands for,” he urged the club. “V.I.D. evolved out of the idea of changing the Democratic Party.”

Schwartz said that Sanders has basically been the same person, holding the same principled views, since 1962 when he was “arrested for taking over the campus of the University of Chicago.”

Lois Rakoff surprised V.I.D.’ers when she announced she felt Bloomberg was the best choice.

“Oh, my God,” blurted out one aghast member, amid some laughter at her remark.

“Yes,” Rakoff said, confirming she had really said it. “He can beat Trump. He is savvy. He’s very health-conscious. He got rid of smoking in the bars and restaurants — not so much for us but for the workers.

“I know he’s against legalizing marijuana,” she conceded. But she added that, if elected, Bloomberg would likely come around to legalizing weed after more states inevitably would.

“To me, she’s the most progressive candidate. It’s a full-throated endorsement,” she said, saying she admired the candidate’s “grit.”

“I think he has a pragmatic approach — gun reform, criminal reform,” she said of Buttigieg. “I’m really impressed with his ideas. He has a way to bring us together.”

“Recently we’ve been hearing a lot about corruption,” she said. “She’s all about anti-corruption.”

Hoppe held up a copy of Warren’s book “A Fighting Chance.”

“I read it on the elliptical,” she said. “It’s not hard to read. She has a plan for everything. And that’s what we need in the White House after three years that have been a s— show.”

Tony Hoffmann spoke strongly for V.I.D. going no endorsement, at least for now.

“I would like the club to wait till March — March 2 is Super Tuesday,” he said, noting there would be fewer candidates left standing after then to pick from.

Some veteran V.I.D. members flashed back to campaigns from decades ago when club members battled over tough decisions. One man, who said he got involved with the club when Ronald Reagan was president, recalled how members were split between backing Jesse Jackson or Alan Cranston in the 1984 election. Ultimately, Walter Mondale was the party’s Democratic nominee.

Jon Geballe made a pitch for Klobuchar as a pragmatic candidate who could win.

“We’ve heard a lot about candidates — Warren and others — and ‘revolution,’ ” he said, adding, “That is a dangerous way to go.”

What is needed, on the other hand, he said, is reform.

“Amy Klobuchar is the heartland candidate,” Geballe pointed out. “She will bring that heartland, moderate sensibility to the race — and we need that to win.”

He said the Vermont senator embodies the values of “the Democratic Party going back to F.D.R. He’s really like a New Deal Democrat,” Bredin said. “Young people love him. I teach on college campuses, I’m in touch with young people.”

Several club members stressed the importance of “electability” and “pragmatism” as factors in who they felt V.I.D. should back.

But one young member said Warren had the best policy positions, and that it was important for him, above all, to back a candidate who he found inspiring.

“She’s smart as a whip,” he said of Warren. “I’m an attorney and she has the policy answers.”

However, another young club member chimed in, referring to conservative Boris Johnson’s victory across the pond.

“I think today’s election in the U.K. shows what happens when you don’t consider electability,” he warned.

“And look what we got,” he remarked, drawing a few groans. This time the club should do the right thing and back Bernie, he said.

Former District Leader Keen Berger also threw her support behind Warren, arguing the candidate is not as out of the mainstream as many paint her to be.

“She’s Midwestern, too, from Oklahoma,” Berger noted. “She has three brothers that are in the military. I watch her on TV and she has a mannerism that is powerful.”

Similarly, part of Obama’s winning formula was that he was a fresh face with a message of hope, he noted.

“She has the energy and the intellect and a plan for what the country needs,” she said, “and I think she can beat Trump.”

Sharon Woolums said simply, “I think it’s time for a woman to be president of the United States. I support Warren.”

In one easy vote at least, later in the meeting, Siffert was re-elected president of V.I.D. for another one-year term.