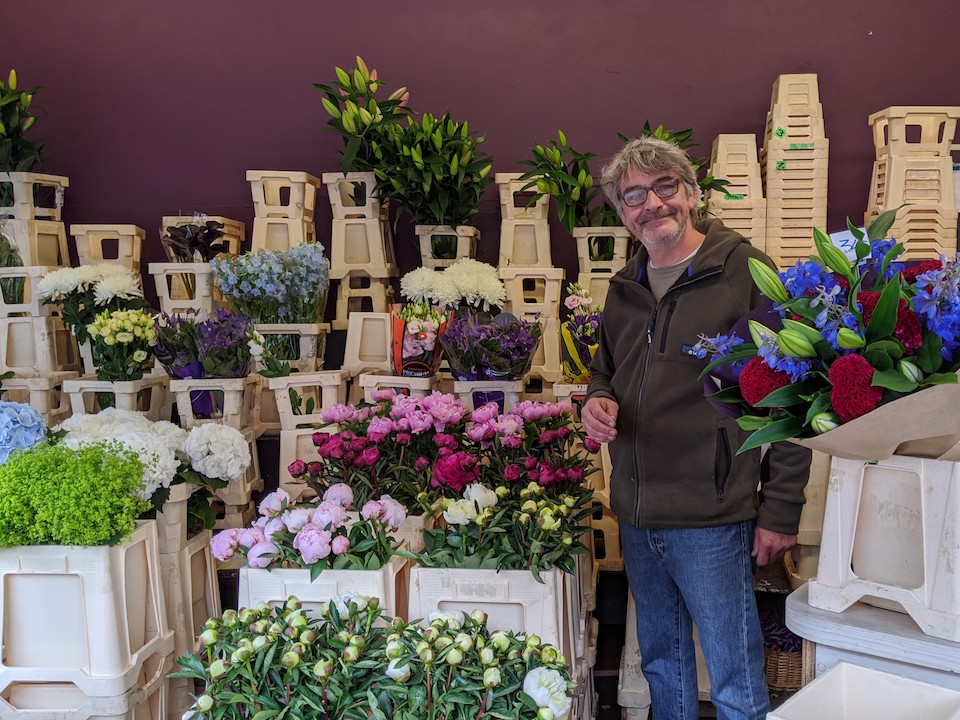 The local florist is back open, though his shop is threatened by rapacious development. (Photo by Liz Thomson)

BY LIZ THOMSON | Eighty days. The time it took for Phileas Fogg to travel around the world. So, too, and in real life, Nellie Bly and Michael Palin.

Eighty days. The time Britain spent in lockdown, only healthy individuals under 70 allowed out for essential purchases, plus one exercise per day, or to help those not permitted to leave home — those over 70, all of whom were “isolating,” people of any age “shielding” because a preexisting condition made them vulnerable. Shopping and medicines were delivered to their doorsteps — we were not permitted to step inside anyone else’s home.

No visits to elderly parents. Loved ones, in hospital or in care homes, were permitted no visitors. As in New York, the dying had their hands held by doctors and nurses. Families grieve alone and unhugged. The psychological toll is unimaginable.

Britain is now unlocking, the combination turned a little each of the last two weeks (garden and DIY centers opened first) and, this coming week, turned a lot with not just local stores opening but London’s big department stores.

We may now see people who dwell outside our homes if we do so in “a support bubble,” a move designed to help seniors and those who live alone.

Children in their first years of school were meant to be back in the classroom, despite concern from teaching unions that while the kids may not be at risk staff were, traveling to and from work and mixing in the staff room. Desks would be distanced, classes split. Then it dawned on the government that schools had insufficient space and staff to make two-meter social distancing work. It’s what happens when you appoint as your Secretary of State for Education a former fireplace salesman.

Eighty days is a long time to be in lockdown, and while some people will have taught themselves Sanskrit and read “The Odyssey” in Greek, most have simply been trying to earn a living, homeschool their children, deal with life’s necessities, keep well and keep their head together. It’s reported that many people are drinking earlier in the day. Prescriptions for antidepressants are up by 10 to 15 percent.

The British public — scared by reports from Italy, Spain and New York City — battened down the hatches and obeyed to a degree no one thought possible, observing the government’s injunction to “STAY HOME, SAVE LIVES, PROTECT THE NHS.” The great fear was that our National Health Service would be overwhelmed, and at times it almost was. Front-line staff worked like Trojans. All other treatment was put on hold, emergencies only dealt with.

Then came the news that Prime Minister Boris Johnson’s special adviser Dominic Cummings, the evil “genius” portrayed by Benedict Cumberbatch in “Brexit: The Uncivil War,” had broken lockdown with a 500-mile roundtrip to stay on his parents’ estate in northeast England — during which time he’d taken a 60-mile roundtrip to a local beauty spot on his wife’s birthday allegedly to test his eyesight! (Yes, really!)

Moreover, his wife, a prominent journalist, had written an article describing their lockdown, supposedly with COVID, in London. A public which had made great personal sacrifices for the greater good was rightly furious and demanded Cummings be sacked. He’s still in place (his billionaire hedge-fund backers need him to secure Brexit, for they have bet large against the U.K. economy and need Britain to crash out) but the ensuing row hasn’t gone away.

It’s widely agreed that the loosening of lockdown occurred quite suddenly — despite the government’s own “five tests” being largely unmet, crucially the track, test, trace program that was rightly deemed essential for a return to anything even resembling normal life. Indeed, the devolved governments of Scotland, Wales and Northern Ireland have each chosen to proceed with greater caution.

The lack of testing has been a problem throughout, and the government’s duplicity with the numbers was long ago uncovered. The track-and-trace should be run by area health officials, but the Conservatives long ago decimated local government and have chosen instead to use outsourcing companies run by their friends in the city. For example, Loud Sounds, a company which in happier times runs music festivals, was, at the height of the pandemic, given the contract to manage pop-up morgues — recruits were given a day’s training and paid the minimum wage.

Instead, the track-and-trace is being run from a call center, again using minimum-wage recruits. Baroness Dido Harding, drafted to oversee it, has already admitted it won’t be properly functional until September. The bespoke app expensively developed by a Cummings sidekick, performed badly in trials on the Isle of Wight and appears to have been shelved. Since Britain regards itself as exceptional, we cannot possibly go with those apps developed by Apple and Google. Yet Johnson, in language of which Donald Trump would approve, declared the system “world beating.”

Excess deaths during the pandemic currently stand at 63,000 — for comparison, 70,000 civilians died in Britain during World War II. Incredibly, the prime minister last week proclaimed himself “very proud” of his achievement during the crisis.

Neil Ferguson, the British epidemiologist and professor of mathematical biology who resigned as a government adviser, having admitted to seeing his (nearby) girlfriend during lockdown, said numbers would have been halved if Britain had gone into lockdown a week earlier.

It’s worth remembering that on March 3, Jeremy Warner, assistant editor of the pro-Conservative (and Johnson-supporting) Daily Telegraph wrote: “Not to put too fine a point on it, from an entirely disinterested economic perspective, the COVID-19 might even prove mildly beneficial in the long term by disproportionately culling elderly dependents.”

They elderly are expensive and Britain’s social care program is in tatters, as the last three months have cruelly highlighted.

As it has in the United States, the murder of George Floyd has brought people into the streets to protest, overwhelmingly peacefully, in Whitehall and Parliament Square and in other cities. In Bristol, the statue of Edward Colston, a man responsible for the trafficking of 84,000 Africans to North America, was toppled, rolled down to the docks and tipped into the river from where Colston’s Royal Africa Company ships once sailed. Colston’s presence in the city — his history whitewashed so that he stood proud and tall as a philanthropist — has been a running sore for decades. There are calls for other statues in other cities to be removed — even Admiral Nelson, who presides from his perch high above London’s Trafalgar Square, is not safe.

The prime minister — who has written of black people as “pickaninnies” with “watermelon smiles” — was challenged in Parliament to condemn the words and deeds of Trump. He repeatedly sidestepped the question, saying only that “of course black lives matter.” Just not as much as white lives!

This week a report commissioned by the government from Professor Kevin Fenton (a black medic) specifically to enquire into the high number of BAME (Black, Asian and minority ethnic) COVID deaths was published only under pressure — and with all discussion of economic factors, occupational risks, comorbidities, and structural issues, including racism, discrimination, stigma and distrust, edited out.

Leaks reveal that BAME staff were disproportionately affected by shortages of PPE. BAME citizens comprise one-fifth of nursing staff yet two-thirds of deaths. As to doctors, 44 percent are BAME yet they account for 95 percent of deaths. Add to that deaths of care home staff and other front-line workers, including bus drivers, and an ugly picture emerges of a society that is very far from equal and a government that, like America’s, doesn’t much care.

This weekend is the third anniversary of the Grenfell Tower fire in which 72 souls, overwhelmingly BAME, perished.

“I can’t breathe,” wheezed more than one distressed caller to the emergency services in an eerie echo of George Floyd. The inquiry is ongoing and no one is expecting much in the way of justice.

I write all this from my home in a peaceful and leafy part of North London where a multicultural, left-leaning, pro-European community rages against the dying of the democratic light — just as the Village, and New York City in general, rage against the Trump administration, on which Britain would be forced to rely should America see fit to return him to power.

Heaven help us both if a second wave of COVID sweeps through, taking more lives and further damaging the economy. But whatever happens, Britons and Americans alike face a perfect storm.

Thomson is a British journalist and author and the founder and executive producer of The Village Trip, a festival celebrating the history and heritage of Greenwich Village.