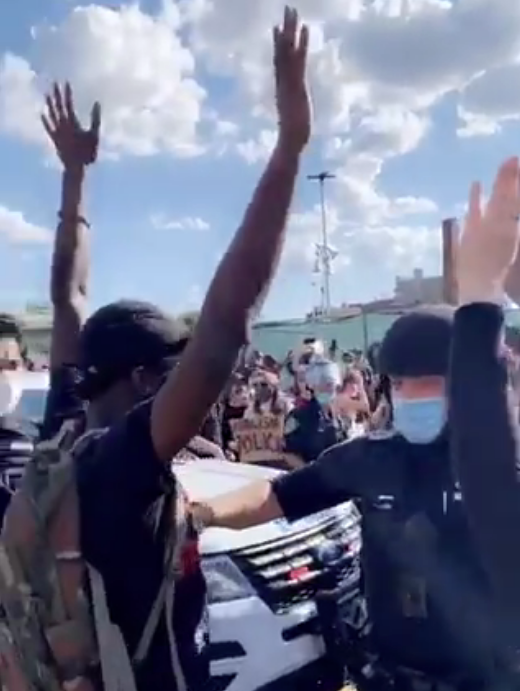 In this screen grab from a viral video, a protester is clearly seen with his hands in the air. But the police officer then yanks down the man's mask and shoots him straight in the face with pepper spray. (@BlakandBlack/Twitter)

BY THE VILLAGE SUN | As part of departmental investigations into police misconduct during the George Floyd protests, Police Commissioner Dermot Shea announced two officers have been suspended while a supervising officer will be transferred.

In the first, on Fri., May 29, a police officer at a protest near the Barclays Center in Brooklyn roughly pushed a woman who was standing in the street, sending her hurtling to the curb. The officer currently has been suspended without pay.

NYPD officer just called a female protester a “stupid fucking bitch” and threw her to the ground pic.twitter.com/18YUHYmqQa

In addition, a supervising officer who was on the scene during this misconduct will be transferred.

In the second incident, on Sat., May 30, a police officer abruptly yanked down a young male protester’s face mask, then pepper-sprayed right him in the face. This officer currently also has been suspended without pay.

Filth out of control:

A young black man with his hands up peacefully protesting and an NYPD officer pulls down his mask and pepper sprays him.#PoliceBrutality #PoliceAccountability

All three cases have been referred to the N.Y.P.D.’s Department Advocate’s Office for disciplinary action, which could involve training and/or other penalties.

Shea stressed that he is committed to “transparency” in the investigations into cop misconduct during the protests.

“Over the past week, as I’ve said on multiple occasions, we have seen several troubling incidents involving behavior from members of the department that the N.Y.P.D. is actively investigating,” the commissioner said.

“Like all New Yorkers, we are acutely aware of the unique times we are in. While the investigations have to play out, based on the severity of what we saw, it is appropriate and necessary to assure the public that there will be transparency during the disciplinary process.

“These incidents mentioned above are disturbing and run counter to the principles of N.Y.P.D. training, as well as our mission of public safety,” he added. “The actions by these officers stand apart from the restrained work of the thousands of other officers who have worked tirelessly to protect those who are peacefully protesting and keep all New Yorkers safe.”

Shea said more investigations into police misconduct during the protests are ongoing and that findings will be shared publicly.

“There are other matters that we are actively investigating,” he said, “and we will be transparent as the process continues.”