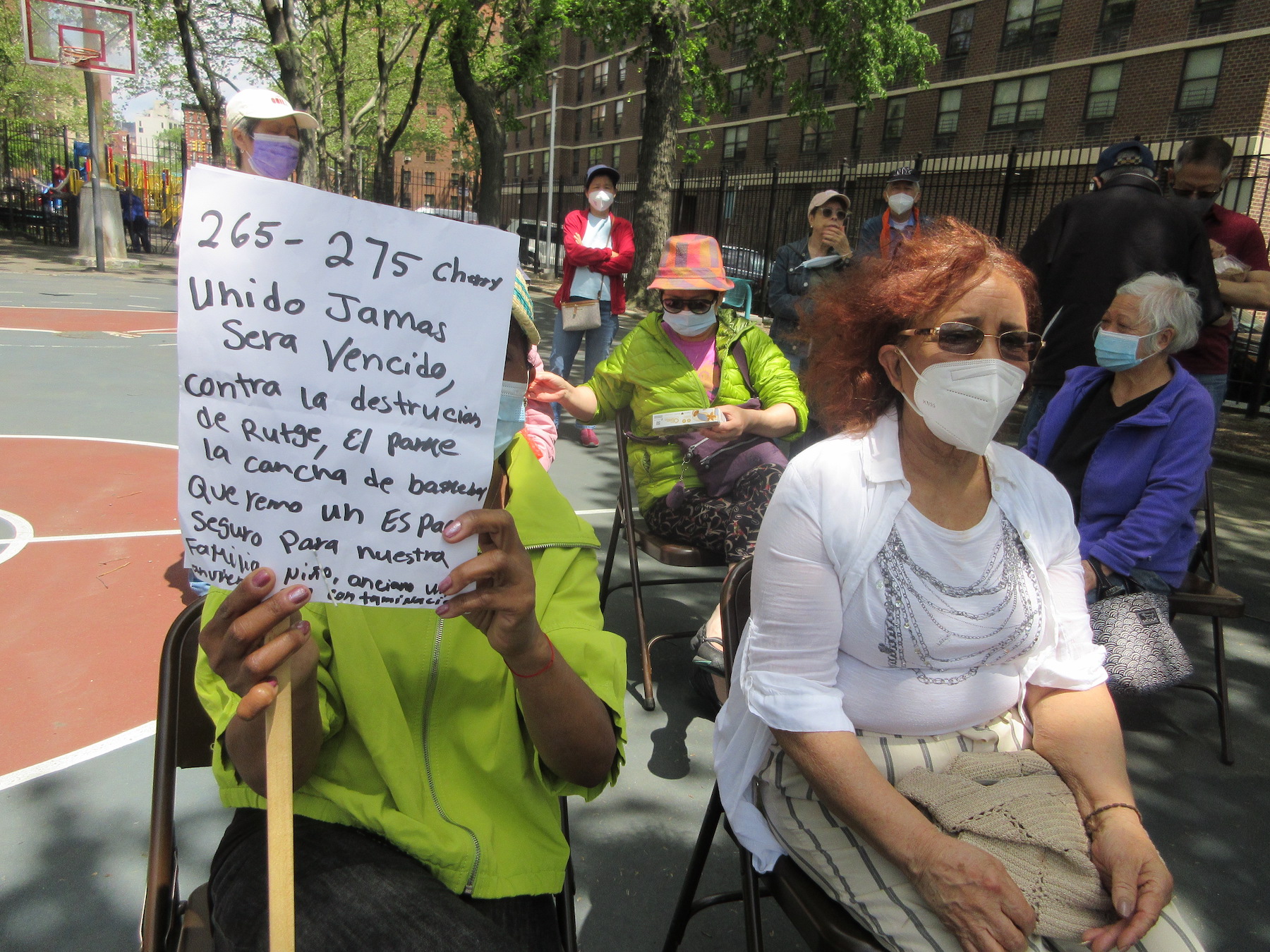 Two Bridges park to be demolished to residents’ outrage

BY DASHIELL ALLEN |Two Bridges residents are prepared to make a final stand to save Rutgers Park, a precious parcel of green space nestled between two low-income apartment complexes.

Per a schedule shared with The Village Sun and posted in the lobby of Lands End II, two Section 8 buildings, the green space — which includes basketball courts, a playground and seating heavily used by seniors — will be demolished starting Mon., May 23. Trees in the surrounding area will also likely need to be cut down.

The sliver of space —  between South Street and Cherry Street — is set to be used as an interim parking lot during the construction of two 70-story residential towers, with 25 percent of their units designated as affordable, to be developed by Chetrit Group and attached directly to the front of Lands End. After the construction is finished, the park would presumably be returned to its current use. Per the schedule, work would conclude at the demolished park space by July 7.

Currently, the developers are waiting until sometime in June to test the piles they previously drilled into the ground for the towers.

Many residents are furious, charging that they were given insufficient notice of the demolition. In fact, the park’s destruction was never mentioned in the Two Bridges environmental impact statement completed in 2018. In fact, the report’s section on open space simply states that “the existing private Rutgers Slip Open Space would be enlarged and reconstructed, and dedicated as publicly accessible open space.”

“I am tired of us having to lose our freedoms for the people that have the money to make their lives better and more interesting in the luxury buildings that they want to put up here,” said Linda Mathias, a longtime resident of 82 Rutgers St., at a rally in the park this past Tuesday.

“Everyone wants to take it away from us and we’re tired,” she railed, decrying the open space’s imminent destruction. “We’re tired of people coming into our neighborhoods and telling us that we’re not good enough, we don’t matter, and we’re not important.”

Chetrit Group, the new towers’ developer, did not respond to The Village Sun’s request for comment.

A spokesperson for Related Companies, the owner of Lands End II, which also owns the park space, told The Village Sun in a statement, “As the development project on the adjacent property gets underway, our singular top priority is our residents. We are in close communication with the Lands End 2 Resident Association (LE2RA), and work to update the LE2RA as soon as we become aware of construction plans next door in every instance.

“On April 29, the developer of the project, the Chetrit Group, informed us about the upcoming need for some of our residents to move their cars to the temporary lot around the corner by June 23.”

The statement continued, “We will continue to work closely with the LE2RA and all of our residents to ensure that they’re updated as soon as possible about upcoming work at the neighboring property — with residents, safety is always the top priority.”

The spokesperson also said the developers are planning to work with residents to identify options to relocate the playground and other open space.

But Lands End II residents question whether owner Related has the right to remove the parking and open space, and if the developer, which owns an adjacent lot, is allowed to displace residents’ parking.

Previously, both Lands End II and the adjacent parking space were owned in a partnership by developers L+M and CIM Group. In fact, according to tax map records, up until 2010 the two properties were considered as one.

The developers purchased the two lots — Lands End and the parking space — in 2013 for $280 million. Then in November 2020, they sold just the buildings to Related Companies (owned by billionaire Stephen Ross) for $435 million. They subsequently sold the parking lot to Chetrit Group for $78 million.

Since the developer is no longer the landlord, they have less incentive to be accountable for damage to Lands End, Castro Negrón explained to The Village Sun.

Previously, multiple residents shared photos of cracks in their apartments’ walls and ceiling. The floors of many apartments also appear to be on a slope.

Cracks have also appeared recently in Rutgers Park, which Castro-Negrón speculates might have to do with drilling work, or soil samples taken last year for the project.

The Related spokesperson noted that the management team is on site to make same-day inspections if they receive complaints about vibrations.

The Department of Buildings wrote in an e-mail that, “To date, the developers at 265 South St. have complied with all necessary environmental remediation requirements related to the planned tower construction project.”

At Tuesday’s rally, residents stood strong in opposition to their park’s imminent destruction.

“We are not going to let that happen without fighting. We are going to stand till the end,” said Tajuana Grant, a Lands End tenant leader. “We have faith and we have hope. And we have a higher power that’s bigger than anything. Not only are they taking away this basketball court, our parking space, but they’re also taking away from us as human beings.”

“We’re gonna be out here again,” assured Trevor Holland, an 82 Rutgers resident and founder of Tenants United Fighting for the Lower East Side (TUFF-LES).