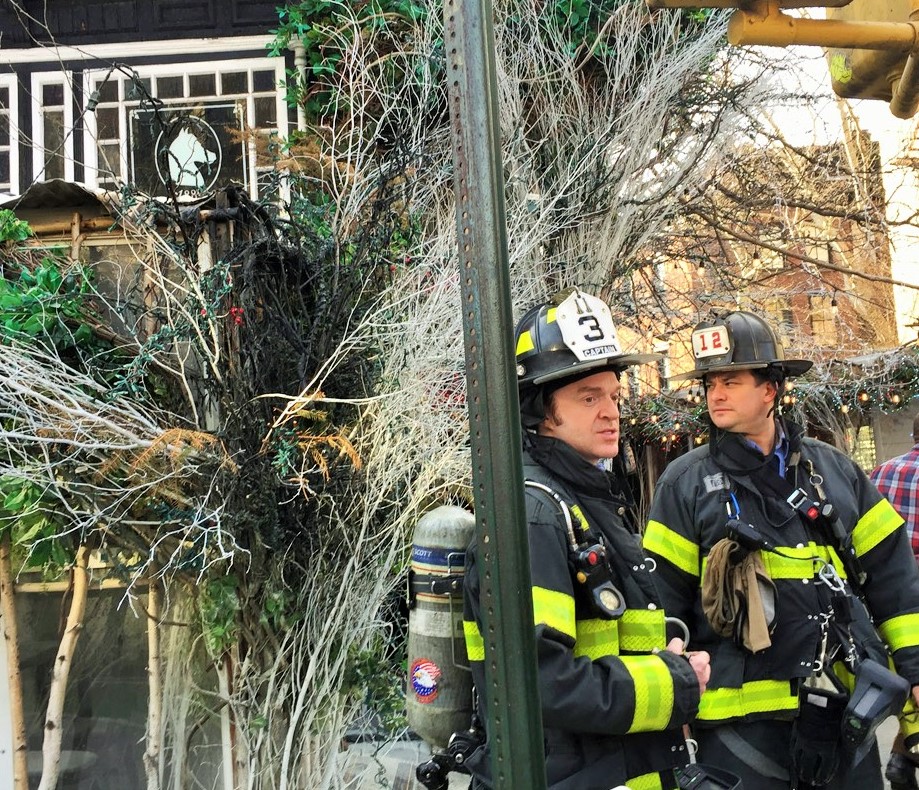 Firefighters responded to the scene after some ornamental foliage on the White Horse Tavern's sidewalk cafe caught fire. (Photo by Jefferson © Siegel)

BY JEFFERSON SIEGEL | On Monday afternoon, firefighters rushed to the historic White Horse Tavern on Hudson Street in the West Village. They were not anxious to slake their thirst. Rather they were there to quench a small fire.

The tavern’s outdoor dining shed, decorated and covered with branches, leaves and tree limbs, somehow saw a small fire spark on the branches over the shed’s door by W. 11th Street. Firefighters were able to quickly extinguish the blaze. Minutes later the burnt area was barely visible from the street as a bar employee stepped out to sweep away a small pile of ash. There were no injuries and there was no damage to the shed or bar.

On Monday night the Fire Department’s press office had no further information on the small fire and its cause.

The landmarked pub, founded in 1880, is the second oldest watering hole in the city. According to its Web site, the White Horse originally catered to longshoremen working the ships and docks of the Hudson River. In the 1950s it attracted artists and writers who moved to the West Village, including Dylan Thomas and Jack Kerouac, as well as folk and jazz musicians.

Three years ago, the building was purchased by notorious landlord Steve Croman and the bar was taken over by Eytan Sugarman, who upscaled it to turn it into a trendy hot spot.

Andrew Ansbro, the head of the Uniformed Firefighters Association union, recently warned that the Open Restaurants roadway sheds can be hazardous, in some cases, because they can impede firefighters from responding to building blazes. He didn’t mention, however, the issue of dried-out decorative foliage igniting on sidewalk cafes.