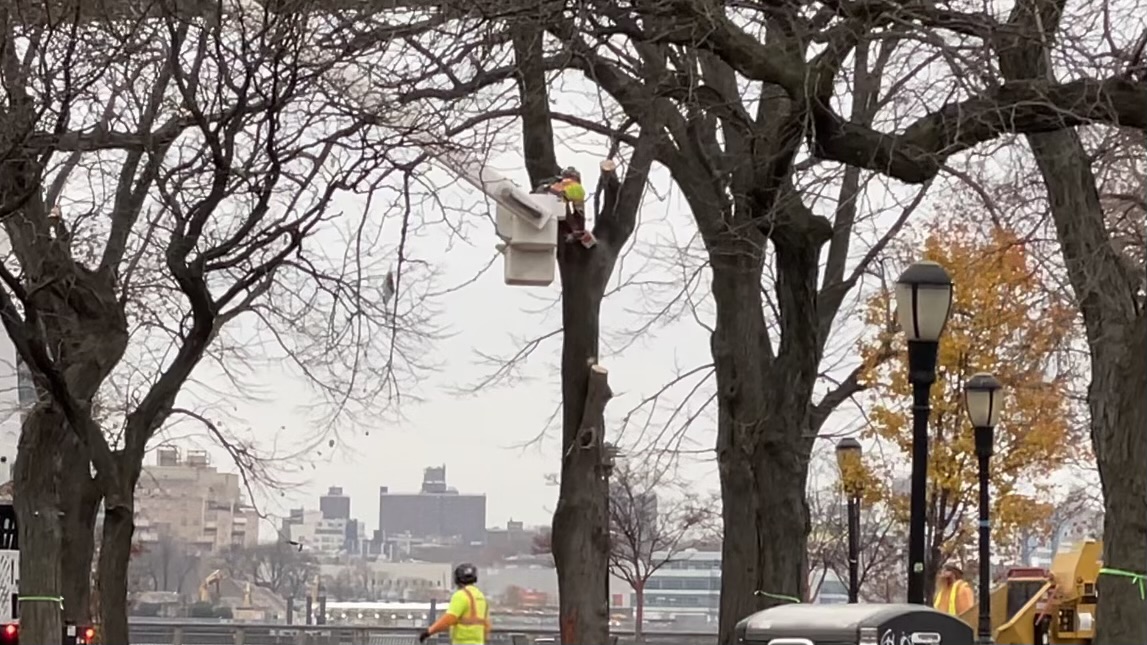 A worker cuts branches off a tree in East River Park on the morning of Fri., Dec. 10. (Photo by Allie Ryan)

About five hours later, at 11:30 a.m., protesters clashed with police at the new fence blocking off the work zone in a wild video posted to Twitter. Police are seen trying to close the gate while shoving away a swarm of protesters.

Around 8:30 a.m. an incredulous Tommy Loeb, a member of East River Park ACTION, who could see the destruction playing out from his windows, fumed, “They’re in contempt of court!”

Kathryn Freed, a former judge who is a co-counsel on the community lawsuit against the East Side Coastal Resiliency project, said Mayor de Blasio’s Law Department unilaterally decided there is no stay in effect to stop them from destroying the park.

Basically, as she explained it, the Court of Appeals itself cannot issue a stay, although, this Wednesday, it did stay the actual previous decision from Nov. 30 by the Appellate Division (a lower court) against the community lawsuit.

Friday morning, Freed and her co-counsel Arthur Schwartz, who are doing the case pro bono, were scrambling to have the Appellate Division clarify that its Nov. 30 decision against the lawsuit has been stayed by the Court of Appeals — which would mean a temporary restraining order (T.R.O.) that the Appellate Division had issued while it considered the case should still be in effect, the attorneys argue. Freed said they hoped to be in court at 9:30, virtually, to get a clarification.

She said a city attorney had called Schwartz at 6 p.m. the previous day to say the workers would be restarting the tree-cutting.

While the legal technicalities are confusing, the reality of trees being cut in the park once again on Friday was starkly clear.

Freed, speaking from her apartment on Grand Street, at one point said police were trying to stop the cutting. But Emily Johnson, one of the park activists, who was running over to the park, said the cops were actually arresting the protesters.

“Our people went in to try to give the T.R.O. to workers and contractors. They said they don’t want it,” she said. “They have two of our people in cuffs in the squad car. This is insane.”

Former City Council candidate Allie Ryan, who was also on the ground in the park at Houston Street, described a chaotic scene. She was furiously posting photos and videos on social media but took a break to give The Village Sun an update.

“There are helicopters overhead,” she said. “I think they’re news and police — it’s like military. They are still working. The paddy wagon is still here; I think the two people who were arrested are still inside.

“Oh, my God, they have chopped down a lot of trees and shrubbery today,” Ryan said. “I’m getting reports from people in apartments who can see it that they are chopping down the trees at the Seal Park and destroying the ball fields at Grand Street.”

Freed said the workers are knocking down the fencing around the ball field.

Ryan said the workers did pause the carnage when police first showed up, but only for five minutes, then started right back up again.

She said park activists are rushing over to the park, but some are leaving after an hour because it’s so cold.

Meanwhile, Freed said she has never quite seen anything like this, in terms of an administration so hell-bent on pushing through the things it wants, the opposition be damned. She stopped short, though, of calling Friday’s situation in the park illegal.

The Court of Appeals hearing is set for 10 days from now on Dec. 20 and Freed said she doesn’t understand why the city just doesn’t wait until then.

“I don’t understand why the city had to do this,” she said. “Are they trying to spark a riot and say, ‘They’re all rioters’?

“You’d think, in de Blasio’s last days in office this wouldn’t be happening,” she said. “It’s really causing polarization in this city. It’s pitting people against each other — like Soho/Noho. What responsible person does this — unless his name is Trump?”

She was referring to the contentious Soho/Noho rezoning, which is set for final approval next week.

Freed, who was the former longtime District 1 city councilmember, said she doesn’t think people fully grasp that the resiliency project is going to totally obliterate every living thing in the park.