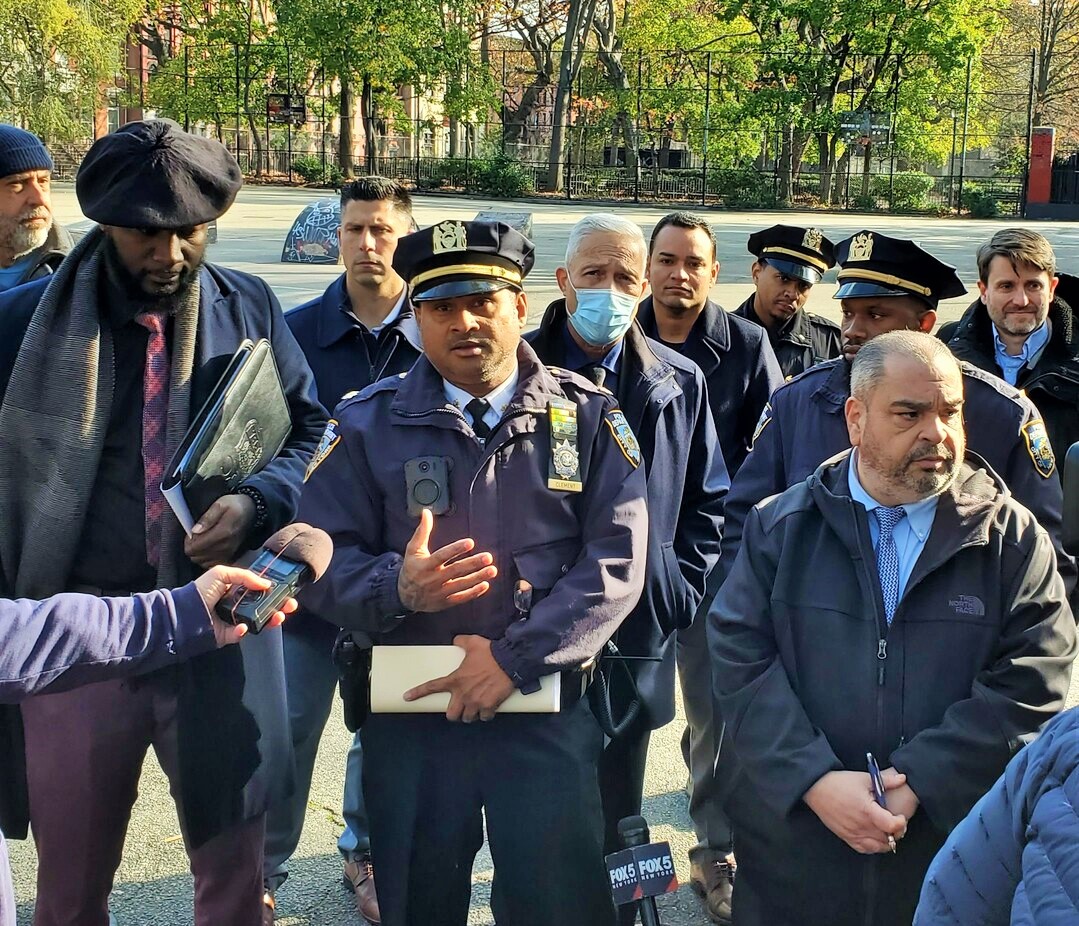 Deputy Inspector Ralph Clement, center, said closing Tompkins Square Park is challenging due to lack of manpower. The Parks Department PEP supervisor at right, however, said his agency doesn’t want the job, either. (Photo by The Village Sun)

BY LINCOLN ANDERSON | Updated Dec. 2, 1:30 p.m.: It felt like the ’80s all over again, as East Village locals heatedly argued at a meeting last month with police over whether Tompkins Square Park should be closed at night.

Some residents are concerned that the park has been closed inconsistently since the pandemic, charging it has made the place a magnet for drug use and noisy and dangerous late-night behavior. But others counter that closing the park is not the answer.

Meanwhile, exactly why the park has not been shut on a regular basis was not 100 percent clear. Deputy Inspector Ralph Clement, the commander of the 9th Precinct, maintained it’s a manpower issue, while Councilmember Carlina Rivera similarly said it might possibly be an “equity” issue. She said she would check if Washington Square Park, which is being closed nightly, is getting more resources.

Some locals at the Nov. 17 parley, though, contended police have been taking a hands-off approach because they fear local politicians won’t “have their back” if the cops face difficulties clearing the park at night.

“There are people playing ball, doing dope and smoking crack and blaring music at 3 o’clock in the morning,” complained longtime resident Susan Lashley, who lives on E. 10th Street across from the park’s basketball courts.

Lashley later noted that, at some point during the pandemic, new signs appeared in the park saying the curfew was no longer midnight but was now 1 a.m.

“If you just enforce this rule that used to be enforced before the pandemic, we’ll be much better off. Close the park by 1 a.m.,” chimed in Garrett Rosso, a founder of both the park’s dog run and its annual Halloween dog costume fest. “That 10-acre park will not run without this.

“Pre-pandemic, this park was locked,” he said. “It was always locked. We had way more garbage cans. The park wasn’t locked — the drug dealers moved in. We all know the problem.”

Rivera told the meeting that she’s allocating some of her discretionary funding for more garbage pickups in the park.

Rivera offered some perspective on “the bad old days” of Tompkins Square.

After the meeting, Rivera told The Village Sun that she does support closing the park for its nightly curfew.

At one point, Rivera asked Clement directly, “Can you commit to closing the park every single night?”

However, the C.O. contended it’s not that easy, even though he has shifted some of the precinct’s manpower over to the park area to address conditions there.

“I took my officers off of Avenue D, where most of my homicides, shooting homicides are,” he explained. “Instead of having six to eight officers on Avenue D, I only have two. They are now allocated along Avenue A and Avenue B. … I have the 14th Street corridor, the Houston Street corridor, Avenue C,” he added.

Clement said also making things more challenging, he no longer has any plainclothes police officers, either.

Allie Ryan, the founder of the new group Friends of Tompkins Square Park, said Clement previously stated at a 9th Precinct Community Council meeting that he was “passing the baton” to the Parks Department to close the park, meaning that it would be the green-uniformed Park Enforcement Patrol officers’ job. PEP officers are not armed.

A PEP supervisor at the meeting, however, bluntly stated, “We cannot commit to closing the park.” He declined to give his name to The Village Sun.

Erupting in frustration, Rosso shouted out, “The community is asking you to close the park!”

Ryan, who recently led a park cleanup, is also alarmed about heroin needles piling up in the fallen leaves. Rosso added that a dog ate some fentanyl in the park and had to be rushed to the vet, while another got poked in its paw by a heroin syringe.

“We’re pulling more than 300 needles out of the park per week,” he said.

Rivera noted that the Council was about to pass a “needle buy-back bill,” which would encourage users not to toss their sharps haphazardly onto the ground.

Meanwhile, Johnny Grima, a leader of the former “Anarchy Row” homeless encampment outside the nearby former CHARAS/El Bohio, was pacing around on the group’s fringes. He started booming, “They want to kick homeless people out of Tompkins Square Park!”

Like Rivera, as if to put things in perspective, Detective Jaime Hernandez, a longtime precinct community affairs officer, interjected, “There used to be [people swinging] chains in the park. There were homicides. There were overdoses. … We know our responsibilities.”

A man in the crowd advocated for the homeless, saying shelters are “an abysmal place” and that what is needed are safe injection sites. Vacant spaces should also be used to house the park’s homeless, he urged.

“You’re not going to solve the problems of the world!” Rosso retorted. “We just want the park closed. It’s not an encampment.”

Flash was among the group of squatters and anarchists who opposed enforcing a curfew on Tompkins Square back in the 1980s, which led to the infamous park riots — clashes with the police — in 1988 and in ensuing years.

“We shed blood for this park,” he declared. “Are you happy for the gentrification you got?”

However, Deb O’Nair, who has lived just off the park since 1975, staunchly opposed rolling back the curfew. She’s a veteran of punk bands, including The Fuzztones and Das Furleins.

“This was the only park in all the boroughs that had no curfew,” she said, recalling the 1980s. “We fought like hell to get a curfew. It’s going backwards.”

Similarly, speaking after the meeting, Lashley admitted that the situation in the park today pales in comparison to the way it was back in the ’80s and early ’90s. Back then, she said, among other things, people would burn wood in oil drums at night and, in the mornings, for a period of time, a long limousine would pull up on E. 10th Street once a week, and an army of female sex workers would pour out to service the homeless men living in tents along the park’s edge.

“We fought and got Miriam Friedlander voted out,” she recalled of the former left-wing councilmember. “She was the one who was cozy with all the anarchists. We got [Antonio] Pagan in — he was no prize.”

Lashley said residents like her worried things might spiral back to those “bad old days” during the COVID pandemic, and she said the hope was just to “keep it down to a dull roar.”

Moving forward, it’s possible some answers on whether the park will be closed regularly at night might be found at an upcoming Build the Block meeting for the 9th Precinct’s Sector B — covering the area between E. 14th and E. Seventh Streets and Avenue C and First Avenue, which includes the park — on Tues., Dec. 13, at 6 p.m., at the Campos Plaza community center at 635 E. 12th St.