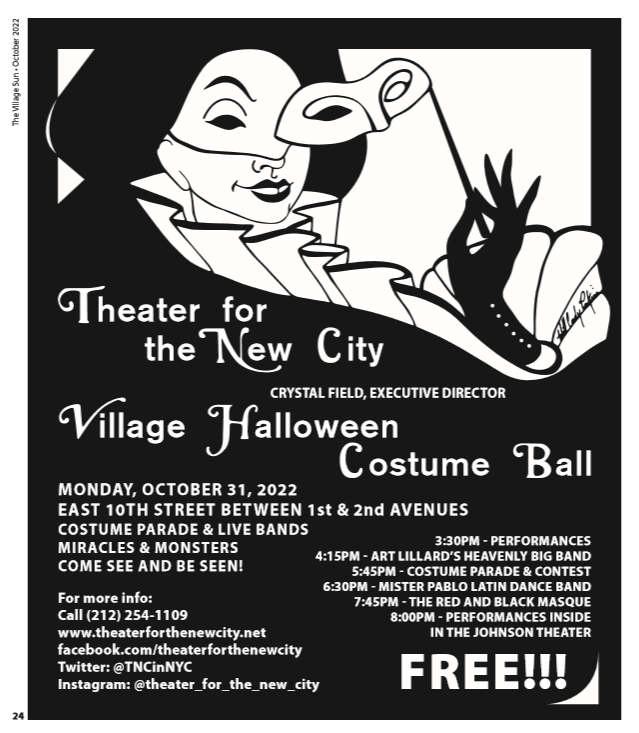 As seen on the back page of The Village Sun's October print issue.

BY CLAUDE SOLNIK | After celebrating Halloween outdoors last year amid the pandemic, Theater for the New City is bringing part of its annual free celebration back indoors in a hybrid Halloween with performances and festivities stretching from the street to its biggest theater.

The theater, at 155 First Ave., beween E. Ninth and 10th Streets, on Oct. 31 plans to present its Village Halloween Costume Ball, starting on 10th Street, which will be closed between First and Second Avenues, in the afternoon.

That will be followed by a medley of performers indoors starting at 8 p.m., ranging from F. Murray Abraham to Art Lillard’s Heavenly big band playing swing music.

Phoebe Legere, Penny Arcade and a procession of performers are on the program for a free festival and day and evening of theater, dance, music and performance art.

“Last year we did a lot of it outdoors and we opened up our shop for audiences [to view performances from] the outside,” TNC Executive Artistic Director Crystal Field said. “This year we’re also going to go inside to the Johnson Theater.”

This won’t be a “normal” Halloween festival, which would include a food room and series of free bands for dancing, as well as use of the TNC Cabaret, Community and Cino theaters. But this does mark the return of performances indoors, which are expected to continue until midnight.

“What’s special is that we’re performing inside our biggest theater, the Johnson Theater, instead of the shop,” Field said. “It’s free.”

Performances are slated to begin outdoors at 3:30 p.m. on Halloween, Oct. 31, followed by Art Lillard’s Heavenly Big Band at 4:15, and a costume parade and contest for children and adults at 5:45 p.m.

The Mr. Pablo Latin Dance Band is slated to perform outdoors at 6:30 p.m. followed by the Red and Black Masque, a ritual performance on 10th Street.

“It’s an anti-war piece in which two opposing forces kill each other off and then dance with their victims,” Field said. “It’s an interactive piece. The audience gets involved.”

Danielle Aziza, Phoebe Legere, Penny Arcade, playwright/performer William Electric Black, Zero Boy, Street Theater, the Wycherly Sisters, singer Lei Zhou and flamenco dancer and singer Inma Heredia are all on the program, along with many others.

TNC has long made Halloween a big holiday, originating its own Village Halloween parade decades ago as a fairly small, essentially local event.

“We began the Village Halloween Parade and produced it ourselves for its first two years when it won an Obie,” Field said of the event, which including puppets designed by Ralph Lee, a brass band and others. “We had all kinds of performers in the early days.”

The parade originally started on Jane Street and wound its way through the West Village streets to Washington Square Park.

“We had witches in the Washington Square Park arch,” Field said. “Those were the early days.”

This year, she said, TNC is announcing something new, although it may not be center stage for the festivities.

“We are announcing a new breakdance move,” Field said of what she called the Spotted Lantern Squish, named for a pesky, invasive fly that has made news lately.

The mask-optional event with no vaccination test at the door won’t be the usual free-wheeling festival filling every room of the theater, but it is meant as a blend of outdoors and indoors.

Reservations aren’t necessary for the free event, but can be made by calling the theater at 212-254-1109.

Reservations help the theater get a head count of expected guests who, incidentally, get some benefits when they arrive at the festival with a reservation.