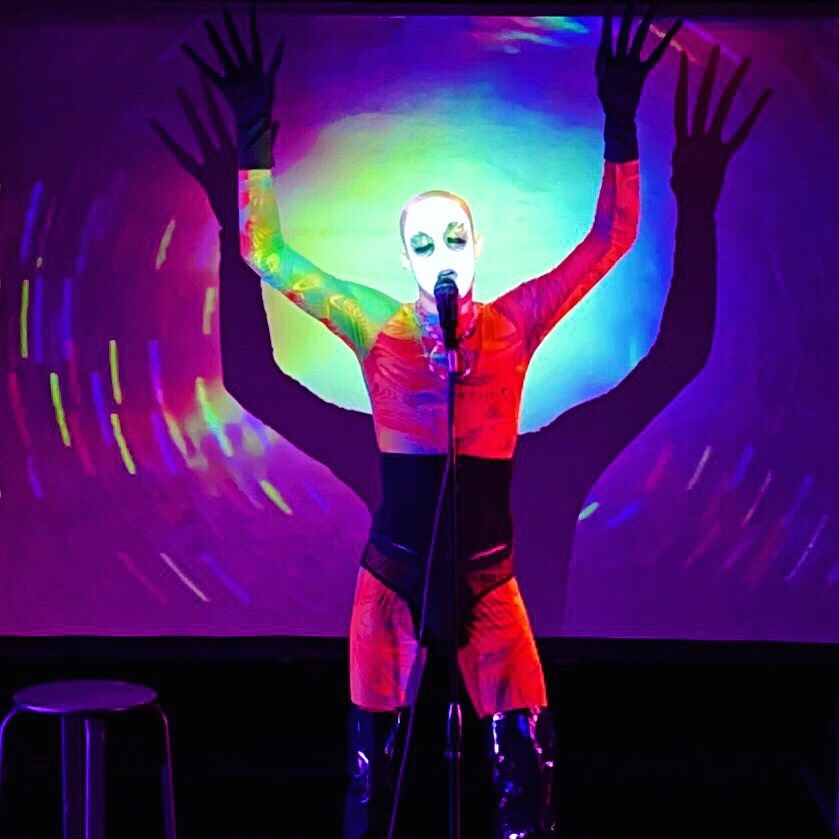 BY STEPHEN DiLAURO | It feels like Philadelphia when I’m in Williamsburg. No idea why that is. But it’s possible that “Hyperfantasia,” the queer universe-encompassing show that was at the Brick, broke the spell last week.

Created by Evan Silver, who has so many hyphenate handles — writer-director-composer-producer-performer — it’s no surprise they/them/their are the preferred pronouns of this explosion of human creativity. *(For the record, I’ve settled on me/mine/more as my pronouns.)

Tiresias is the character Silver inhabits as they spin a mesmerizing sci-fi fantasy drag cabaret of recorded a capella loops within light projections within a monologue that starts with the big bang and winds up somewhere irrepressibly dazzling. (Full Disclosure: There were THC-infused edibles available before the show and I did dabble, so to speak.)

Part of the show’s dazzle comes from Tiresias’s costume, which did have me asking if I was experiencing an acid flashback at one point. (O.K. Fully Full Disclosure: I “dabbled” with edibles a bit before I got to the show.) I would describe Tiresias’s get-up as peacock meets jester meets relentlessly fabulous meets platform heels that will awaken any lurking subconscious shoe fetish. Fortunately, dear reader, there are photos.

Tiresias/Silver invites other performance artists to be part of the fun. The performance I saw included a super-flashy movement and voice artist performing as J’royce. I’m shocked that with all the cell phone cameras in existence, there isn’t one photo available from J’royce’s captivating performance.

The second artist on the bill that night was Hodo Alien — my all-time favorite silent performance artist. She unpacks the madness of contemporary human society in a succinct and incredible demonstration of bodily flexibility, as a Janus-headed extraterrestrial visitor. Word is Hodo Alien is on her way to Los Angeles, where she’s been invited to audition at Universal Studios this week. I’m sure everyone wishes her all the success in the galaxy. But Universal had better let her come home to NYC, where she is a resident bohemian muse, model and extraordinary artist.

In ancient Greek mythology, Tiresias was a blind prophet who was transformed into a woman for seven years. These days Evan Silver, a Luce, Marshall and Fulbright scholar who has presented 15 shows on three continents, describes “Hyperfantasia” as “this miniature epic [that] draws on new evolutionary theories and ancient queer wisdom to dismantle the survival-of-the-fittest paradigm toward an ethic of abundance and extravagance.”

I wouldn’t argue with that if I could.

You have one more chance to catch “Hypefantasia” during Pride month. Tiresias will grace the stage at ANT Fest 2022 this Wed., June 15, at 7 p.m., located at Ars Nova, 511 W. 54th St. Fortification with edibles recommended but optional. For more information, visit Silver’s Web page.

You won’t even have to journey to Philly, I mean Williamsburg. But you might find yourself cruising the galaxy before time. (Methinks life post-prohibition is truly grand.)

DiLauro is a playwright and critic. Installments of his Bohemian Times Gazette are available at bohemiantimes.substack.com.