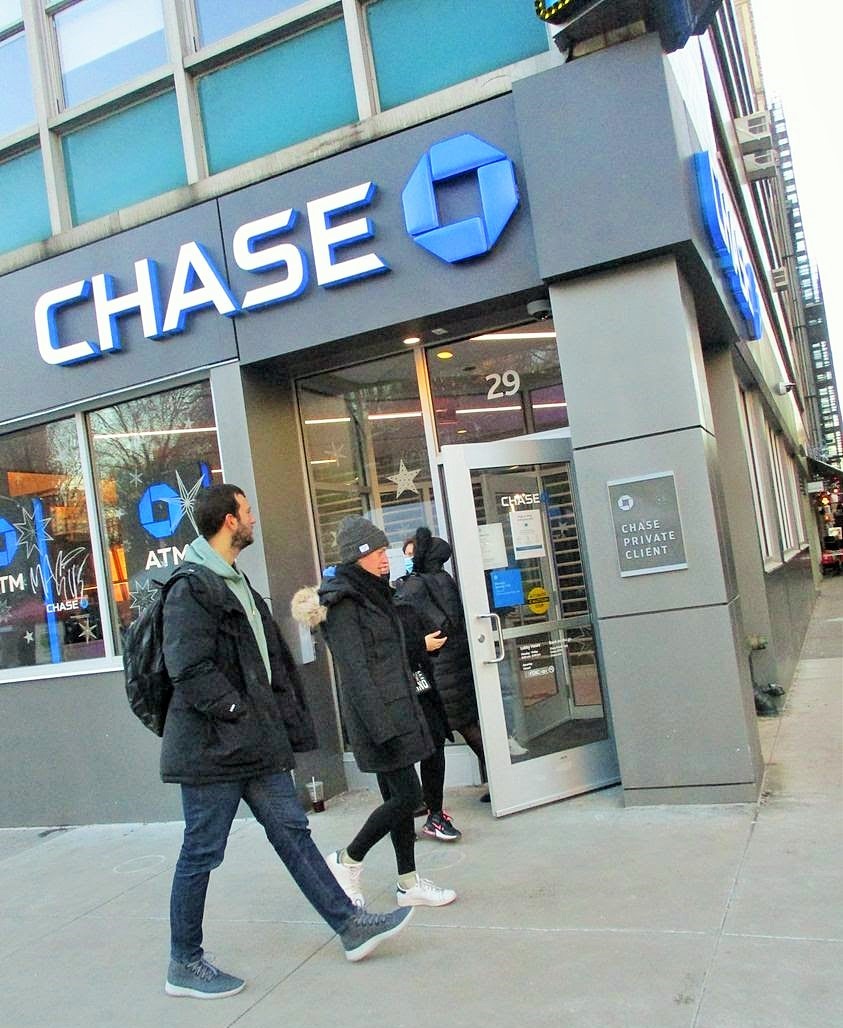 Customers have been flocking to the small Chase branch on Union Square West after some of the bank's other nearby branches temporarily closed due to the COVID vaccine mandate. (Photo by Mary Reinholz)

BY MARY REINHOLZ | When a mini-branch of Chase bank took over the Coffee Shop, a Brazilian-themed eatery that drew A-listers along with neighborhood folk in Union Square for nearly three decades, many patrons felt bereft, predicting the changeover in February 2020 would add to the ongoing “blandification of New York.”

But that was before the pandemic. In recent days, with the Omicron variant surging, people swarmed to the tiny Union Square branch last week after a temporary closing of two Chase divisions in the nearby Gramercy area as bank brass from JPMorgan Chase & Co. tightened protocols to comply with former Mayor Bill de Blasio’s COVID mandate for private-sector employees in the city.

The order from the last days of de Blasio’s mayoral tenure, the first of its kind in the nation, requires workers to show proof of one dose of the vaccine by Dec. 27 and a second dose 45 days later (Pfizer or Moderna).

Current Mayor Eric Adams has said he would continue the mandate.

“Some employees [at  Chase branches] have refused to get vaccinations,” claimed a Union Square staffer to this writer, who had noted there was an exceptionally long line of patrons waiting for a single teller at the Chase branch at the corner of W. 16th Street and Union Square West last week. Chase has been one of the more aggressive companies addressing COVID, telling unvaccinated employees to work from home last month.

A Chase spokesperson, however, said she could not provide information about the number of branches that temporarily closed in New York since the city’s workplace order or to explain how the decisions for closing were made.

“The situation is changing each day, so there’s isn’t a specific number in Manhattan,” said Briana Curran, vice president for Chase’s U.S. regional communications, in an e-mail. “Most of our New York City branches are open as usual, although a small portion are temporarily closed as we comply with New York City’s COVID-19 workplace vaccination order. Customers can continue to use the ATMs at those branches, as well as other branches, chase.com and the Chase mobile app.”

Curran said there are 116 Chase branches in Manhattan and a total of 310 in New York City.

News reports indicated that more than a “small portion of branches” temporarily closed throughout the city. According to the New York Post last week, a survey of Chase’s Web site shows that at least 11 of 37 Bronx locations closed, plus at least 21 of 67 Brooklyn branches. Two of nine Staten Island sites are also closed.

One Upper East Side Chase patron, in need of immediate cash,  told The Village Sun that she was fearful to go to a closed branch at night to use the ATM “because there was no security guard” present when she arrived.

There was  a night security guard over last weekend at the Chase bank branch on 230 Park Avenue South, which briefly shut down. An assistant branch manager for sales later told this reporter that the branch was closed only for a day and reopened Mon., Jan. 3.

There was no security guard at the closed Gramercy Chase branch at 233 Third Ave., at 20th Street, which has been serving customers for 13 years. It’s been shuttered for at least a week, festive holiday decorations eerily still in place on the empty first floor of the building. Meanwhile, Citibank has made it clear it will terminate unvaccinated employees.

Susan Stetzer, the district manager of Community Board 3, which is headquartered in the East Village, said she hadn’t heard of the Chase bank closings and seemed puzzled that bank employees would resist vaccination. She noted that all staff at C.B. 3 have been vaccinated since last fall when then-Mayor de Blasio “sent out a memo” on Oct. 20 requiring city employees to get jabbed against COVID or face unpaid leave.

“We’re fine with that,” Stetzer said. “The only issue we had was filling out the paperwork.”

Assemblymember Harvey Epstein, whose district includes parts of Gramercy and Union Square, noted that the “voters of New York had chosen both mayors de Blasio and Adams to lead” on such issues. He described the mandate for vaccinating private-sector employees as “one more tool that will help keep New Yorkers safe.”