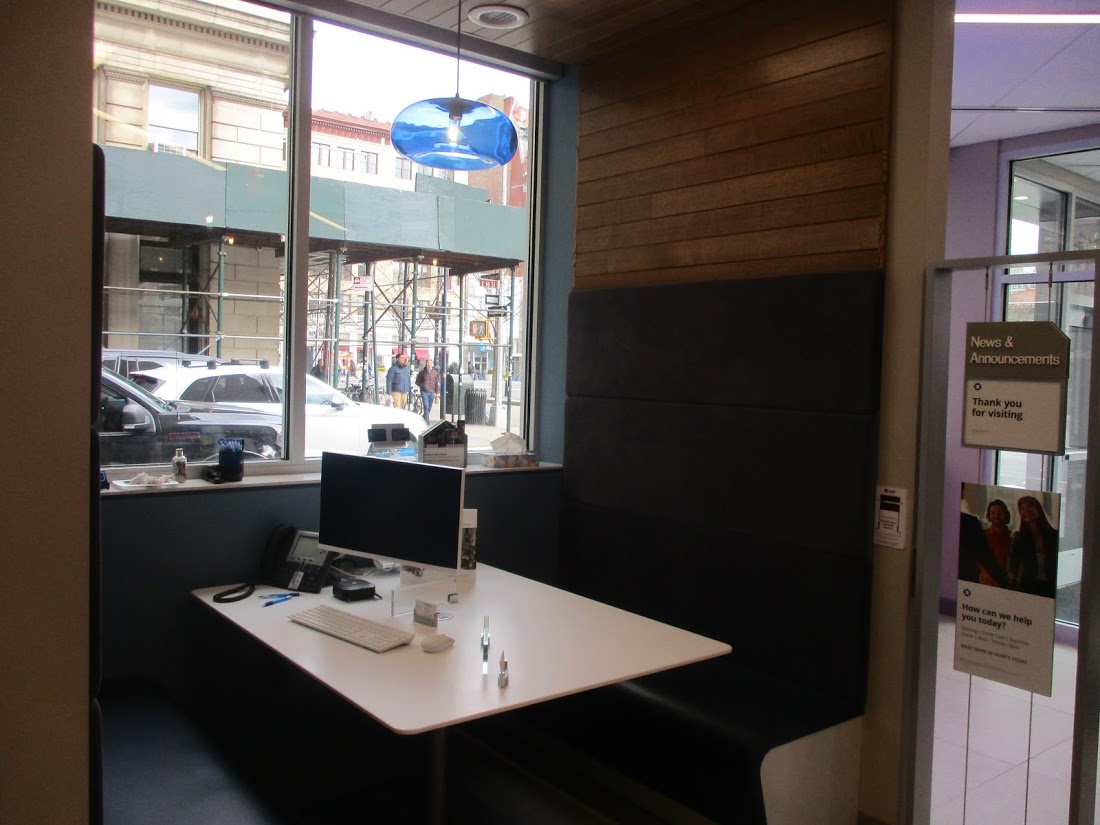 BY MARY REINHOLZ |There was a lot of sturm und drang in December when a branch of Chase bank and its sublet, JoeCoffee, a New York City city mini-chain, moved onto Union Square West at 16th St. into the former space of Coffee Shop restaurant. The popular Brazilian-themed eatery had fed A-listers and just plain folks for 28 years and was a local  institution.

Bloggers blasted the new brands on the block’s corner as another example of the “blandification” of New York.

However, some locals  seemed even more disturbed by the disappearance of Coffee Shop’s signature corner neon sign. The glittering fixture had been used by two predecessor restaurants with the same name, shedding light on the neighborhood’s nighttime turf when  it was a pre-gentrified haunt for drugs and deadly shootings.

Jennifer Silverio, a 20-something Chase vice president and manager of the bank’s new Union Square branch at 29 Union Square West,  acknowledged in an interview with The Village Sun that some customers had complained about the missing Coffee Shop sign.

“I tell them the sign does not belong to us,” she said. “But we pay homage to the Coffee Shop in different ways,” noted Silverio, who was wearing jeans and a dark jacket in a nod to Chase’s dress code, which became more relaxed last year.

That homage includes a painting of Coffee Shop’s sign hanging in one of the branch’s offices — plus the presence of JoeCoffee itself, said a Boston-based spokesperson based for JP Morgan Chase, Chase’s parent company. Indeed, JoeCoffee has preserved the walls of the previous tenant in its small storefront operation adjacent to Chase, said a handsome barista who offered this reporter a free cup of pricey java. (I virtuously declined.)

As for who is in possession of the Coffee Shop sign, that distinction goes to the building’s landlord and owner, Eric M. Goral, a co-C.E.O. and principal of his family’s GFP Real Estate in Midtown Manhattan.

“I’m really at loss on what to do with the sign,” Goral said in a telephone interview. “We’ll find a new place for it. If someone has a concept, I’d be happy to listen to it.”

Goral denounced as a “lie” reports that he had imposed a huge rent increase on the proprietors of Coffee Shop, claiming they went out of business with two years left on their lease.

“They had no increase for eight years and left without paying their rent,” he said. “They used to have a robust business with the 2 a.m. late-night crowd. That business went away. They talked about competition from alternative venues in places like Williamsburg,” he added. “I asked why didn’t they raise their prices,” which were were about $22 on average. “They wouldn’t do it. They felt an obligation to keep affordable.”

During his remarks to this reporter, Goral admitted that the shuttering of Coffee Shop was a painful period that resulted in his losing money. He expects to get back lost revenue on the property “over time” with the higher Chase rent — the amount of which he declined to disclose. Goral also has another new restaurant tenant in the building, a fast-food vegan chain, by CHLOE, that opened an outpost in December in a renovated back room of the departed Coffee Shop. It has an entrance at 32 E. 16th St.

Goral also hopes to add a fourth tenant to the building’s basement space and has thought about an entertainment venue that would offer, as he put it, both “food and fun.” Goral said he’s not thinking about whether a prospective new tenant would be part of a chain or not.

“I’m thinking of what will work in the community and be successful,” he stated. “I want it to have a long life.”

Meanwhile, two of Coffee Shop’s former owners appear to be prospering as Goral’s separate restaurant tenant in Flats Fix, a taqueria next door to by CHLOE that’s housed in a former garage on 28 E. 16th St. (The bar once employed Alexandria Ocasio-Cortez.)  Efforts to reach owner Charles Milite, the former president of Coffee Shop, were unavailing. One of his employees noted that Milite and a partner have another Flats Fix taqueria on E. 23rd St. opposite Madison Square Park.

Milite didn’t appear to be totally heartbroken over the loss of Coffee Shop in October 2018.

“I do think it’s going to leave a hole of some sort in Manhattan,” he told Forbes. “I don’t know when there will be another. But then there’s always the next one. I’ve been joking with my friends that everyone is crying now, but 30 days from now people will have moved on. That’s what we do in New York.”

Meanwhile, people in the East Village have been complaining for several years about the proliferation of banks and drugstores they claim are wrecking the character of Manhattan communities. Some have proposed zoning changes that would limit their size and number to one per block.

The Downtown locals apparently took their cues from activists on the Upper West Side who successfully lobbied the City Council for such changes in 2016, led by Manhattan Borough President Gale Brewer when she was a City Council member.

Susan Stetzer, the district manager of Community Board 3, said none of the proposals had been voted on by the board yet. But she noted that the subject would be discussed at the Feb. 5 meeting of the C.B. 3 Economic Development Committee.