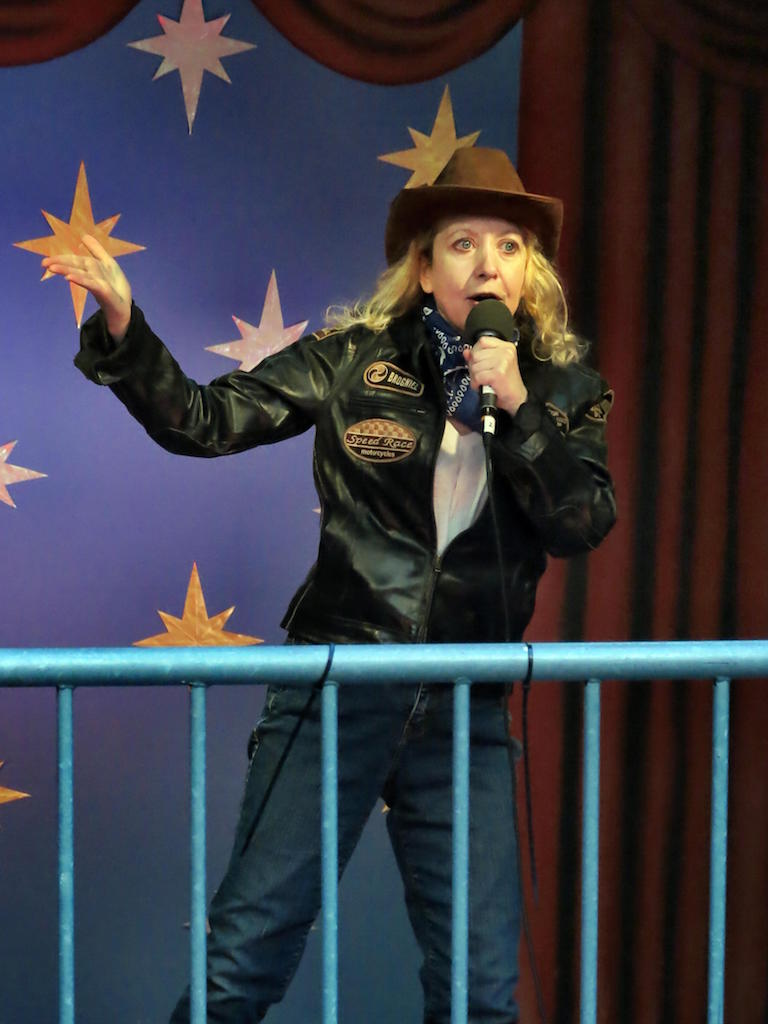 Jenne Vath performing in "Open 'Tho Shut," an afternoon of performances in Theater for the New City's ChopShop Theater, on Nov. 14. (Photo by Jonathan Slaff)

In the words of the classic Dionne Warwick song, “Walk on by”…and watch for a little while.

Theater for the New City, at 155 First Ave., is tackling the problem of Big Apple performance venues still being shut by staging its “Open ‘Tho Shut” weekly series of “walk-by theater.”

The program, which runs on Saturdays from 2 p.m. to 3 p.m., offers a succession of free, short, live performances staged in the theater’s set shop for audiences of socially distanced passersby. People watch the series of brief acts through an open garage door on E. 10th St. between First and Second Aves.

The set shop was renamed “The Chopshop Theater” for this series. It has been outfitted with an elaborate set by Mark Marcante and Litza Colon, full stage lighting and a four-mic sound system.

The acts are also being streamed live on TNC’s Web site and Facebook page.

The series was launched Sat., Nov. 14, as part of “More Ways Than Broadway’s,” a citywide collection of safe and socially distanced pop-up performances to demonstrate small theaters’ readiness and desperate desire to physically reopen and to counteract the perception, based on formal Broadway, that legitimate theaters can’t reopen safely.

The performances were intended to demonstrate an Off-Off Broadway aesthetic that could allow smaller theaters to open safely at this time.

TNC pioneered walk-by theater in its 2020 Village Halloween Costume Ball on Oct. 31, when it reconfigured its set shop with lighting and sound to make it a venue for 10-minute plays. The effort was dubbed “Chopshop Theater.” Ten live performances were offered for Halloween revelers who might pass by on E. 10th St. They watched through an open garage door and were separated from the performers by a waist-high, see-through traffic barricade. Standing spaces for audience members were marked 6 feet apart with chalked pumpkins on the sidewalk. Onlookers were urged to move on between performances, so that the crowd would not become too large, in line with pandemic health safety.

TNC requires all “Open ‘Tho Shut” performers to be tested for COVID before their appearances. Their temperatures are taken as they arrive to perform. Hand sanitizer is provided and microphones are sanitized between performances. Emcees have a separate mic. Face masks are provided to any audience members who arrive without their own.