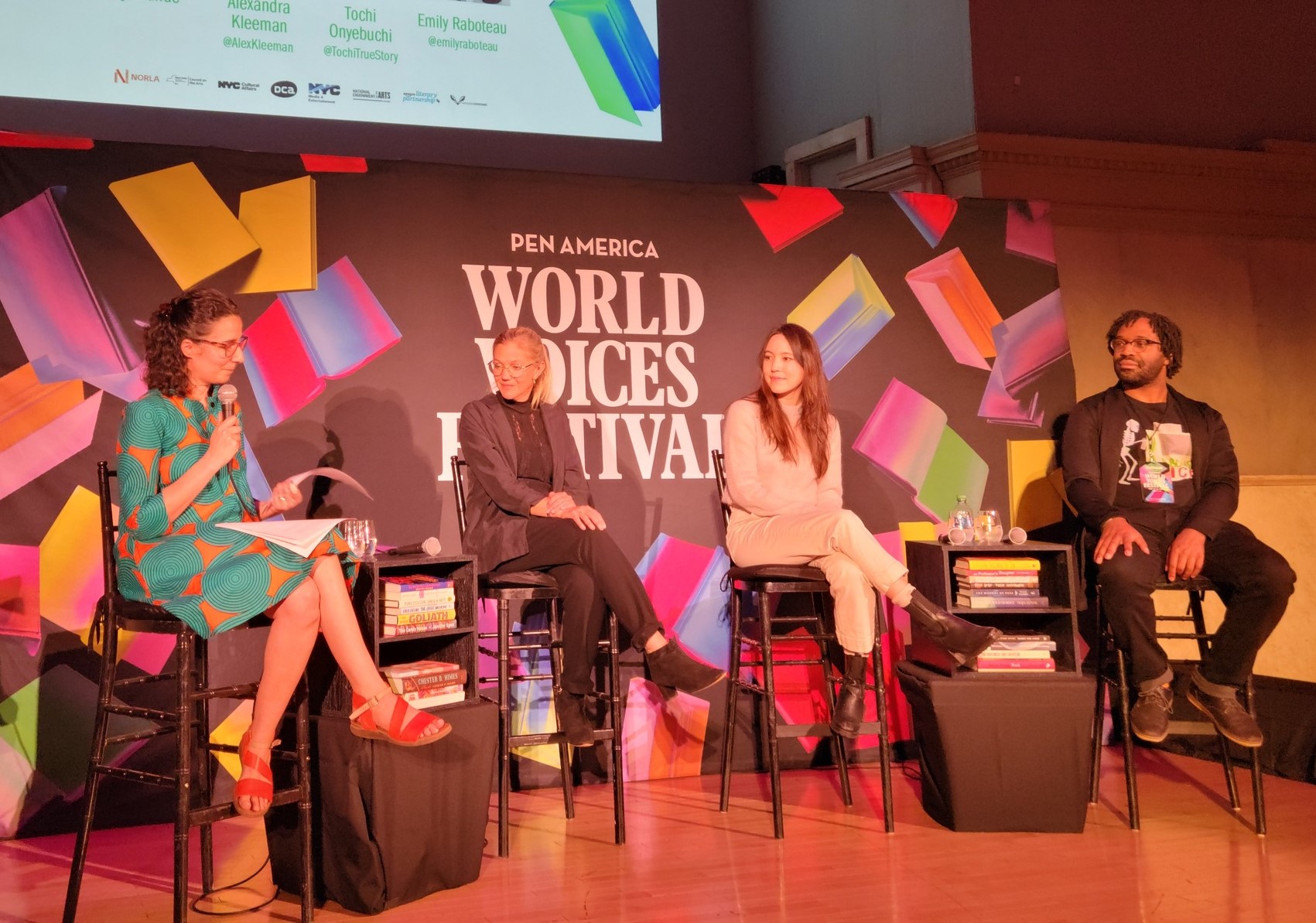 BY BETSY KIM | The PEN America World Voices Festival opened this week in Los Angeles and in New York at various venues in Greenwich Village. The events have aligned with the neighborhood’s historic tradition of being a nexus where creativity, literature and cultural conversations grow.

“All fiction is political,” said Tochi Onyebuchi, the author of “Goliath,” who tipped his hat to Jane Jacobs for her critical thinking in his latest book’s acknowledgments. In his novel, affluent humans have moved out of a trashed, polluted, decaying planet Earth. White flight in the future means to the outburbs of outer space habitation.

On this future Earth, the air is carcinogenic and unbreathable. Wealthier people live in air-filtered domes.

“It’s not too hard to go from redlining and segregation to guess who lives in a dome and who doesn’t,” Onyebuchi explained, “and where the domes get placed and where they don’t.”

In today’s real estate parlance, tomorrow’s Earth might be referred to as “frontier” neighborhoods, edgier and where there is “more action.” In “Goliath,” characters venture back to their homeland — moving to New Haven, the city where Onyebuchi earned his bachelor’s degree in political science at Yale University.

Onyebuchi described his fictional future where air is a precious resource, as a “parallel present.” He pointed out how today certain urban neighborhoods have higher temperatures for the simple reason that they don’t have trees. Poorer communities located near highways suffer from higher asthmatic illnesses, due to the constant motor vehicle exhaust, he stated. The ability to breathe became his most dramatic metaphor for inequality and injustice.

His observations also echoed the tragedies of Eric Garner’s and George Floyd’s dying pleas of “I can’t breathe.”

Alexandra Kleeman described setting her novels in the “near future.” In recent years, climate change has increased the severity of droughts and wildfires in California. News clips repeatedly show images of surreal, hazy, orange and dark, smoke-filled, daytime landscapes. In her book, “Something New Under the Sun,” a commercial, synthetic product called WAT-R has replaced water to address California’s shortage. In Los Angeles, people are literally drinking up what’s artificial.

Kleeman stated that she aims to work against normalizing climate change. With global warming causing floods and erosion of the grounds beneath property, sinkholes were appearing in her Staten Island neighborhood. The first week she was disturbed. But the following week, she simply found an alternate route to travel. This struck her as showing how easy it is for people to accept and ignore climate change.

“I want to keep alive the sense that we are living in an emergency,” Kleeman said. People should ask themselves what that means to them in their regular, routine activities, she added.

“We’ve adapted our habits of consumption to fit a pace that’s not sustainable,” she stressed.

The moderator, writer Emily Raboteau, asked the panelists, given the state of today’s environmental crisis, can fiction convey truths about climate change that nonfiction cannot?

Maja Lunde, the Norwegian author of “The Last Wild Horses” and “The History of Bees,” writes about how environmental degradation is endangering species. But unlike nonfiction, her novels contain intricate plots with entangled human relations and emotions. This adds something to the conversation mix because, as she stated, “Fiction is all about feeling.”

Kleeman noted that fiction could more fully communicate deep and essential feelings. Onyebuchi described the genre’s possibilities in leaving readers indelibly changed. As one example, he opined that Toni Morrison’s fiction preceding Barack Obama’s entrance on the national stage, played a role in allowing people to engage in the idea of an African American as the United States president.

Climate change is an immense topic, in trying to break down the scientific, political and economic aspects, while it looms as an existential threat.

“It’s almost beyond the capacity of our minds to comprehend,” Onyebuchi said. “Fiction is a way to make that sort of thing, if not digestible, then comprehensible.”

Both Kleeman and Onyebuchi described their imagined dystopian futures as also having humor, also being funny. Instead of a diet of scientific facts with pie charts and graphs, they noted how fictional stories can capture personal joy, the realities of being human. Illustrating different ways that people deal with environmental devastation can extend the conversation of serious ideas.

Lunde emphasized how the planet belongs not only to humans but to other animals and living beings, as well.

“Do we have the ability to make up for our mistakes?” she asked. “I don’t have the answers.”

Scheduled from May 11 through May 14, the PEN America World Voices Festival keeps alive the notion that no one public figure, “thought leader” or corporation will answer such questions. Instead, the responsibility and capability for change lies within each and every one of us.