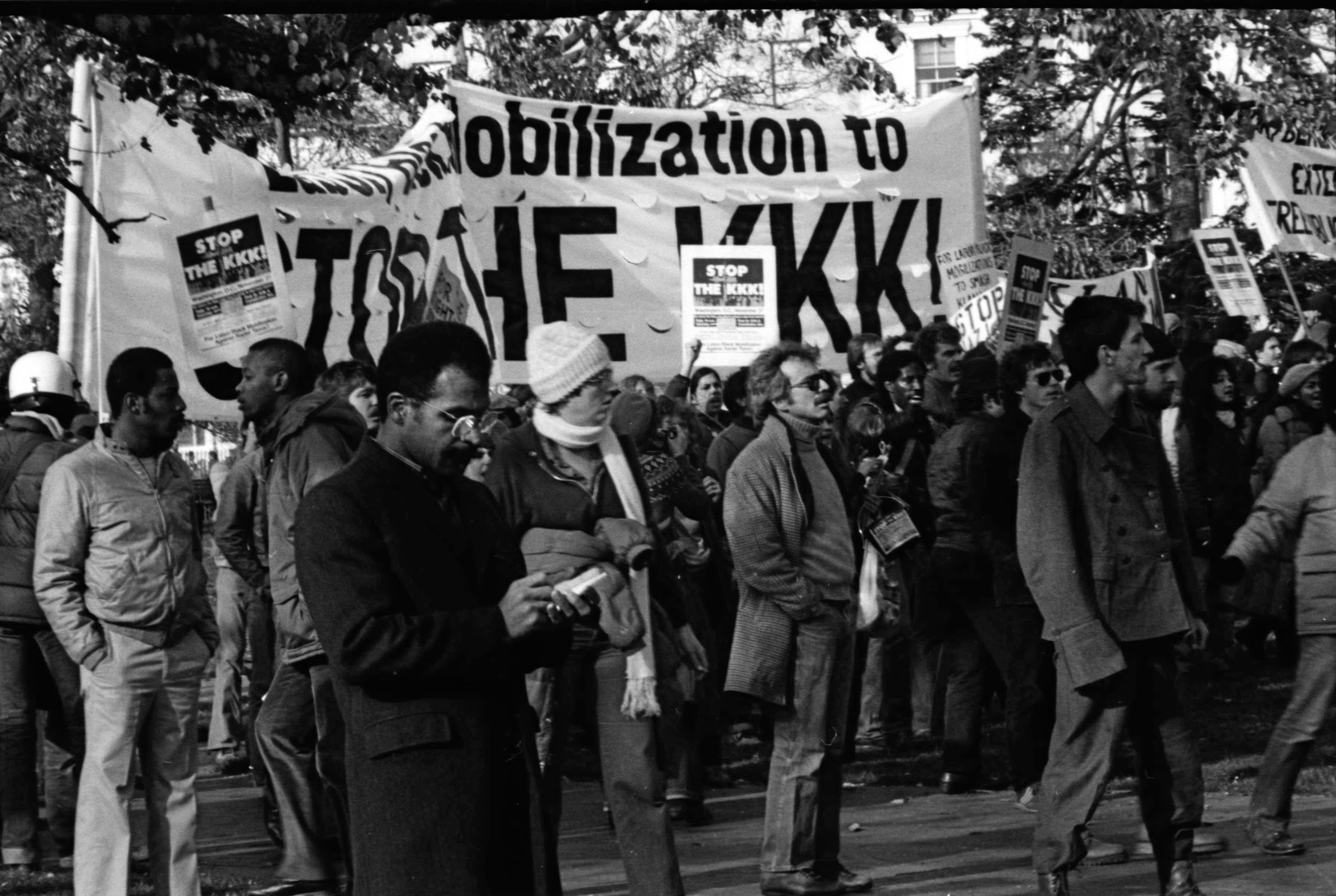 Counterprotesters demonstrating against the Ku Klux Klan in Washington in 1982. (Photo by Paul DeRienzo)

The time the left almost took the White House

BY PAUL DeRIENZO | The pro-Trump raid on the Capitol is being touted as a once-in-a-lifetime assault by right wingers attempting to take control of the central government to bring a nightmare “Handmaid’s Tale”/high school dropout rule to America. The horn-headed, pelt-wearing wannabe Viking white boys thought they were cool until a cop popped a bullet into protester Ashli Babbitt’s neck inside a Capitol staircase. A rendezvous with reality.

The F.B.I. has arrested more than 100, who face long jail terms as they discover a federal misdemeanor or felony is a lot heavier, and expensive to defend against than violating a town ordnance in small-town America. Reality weighs hard on the ignorant.

Despite what the pundits tell us, the assault on the Capitol isn’t the first attempt to storm the seat of power in the U.S.A.

The last occurrence came shortly after a bloody 1979 attack by the Ku Klux Klan on a group of communist anti-Klan radicals in Greensboro, North Carolina, in which five of the lefties were killed and several others seriously wounded. Anger against the Klan’s brazenness was palatable among the left, when the Klan inflamed the rage by announcing in November 1982 they would march on Washington, D.C.

In 1925 the KKK was a huge organization with millions of members nationwide. It organizers played down the KKK’s roots as a southern terrorist group aimed against Blacks and reinvented the organization as a pro-Christian, anti-immigrant group. The KKK of the 1920s had sparked the imagination of white, conservative America in ways similar to Trump today. It was no surprise when 35,000 Klansmen marched in the nation’s capitol.

After WWII the Klan morphed back into a more openly racist configuration, aimed against the civil-rights movement. Its followers tended to hide from plain sight, emerging here and there to support George Wallace or attack civil-rights workers. It was an unusual event when 57 years after the first KKK march on Washington, Arkansas Klansmen and Thom Robb, the Knights of the KKK chaplain, announced 200 members would hold their own commemorative march on Washington.

The violence started when anti-Klan demonstrators began throwing stones and bottles and attempted to break through police lines to assault the small group of Klansmen who actually showed up.

I attended on a Yippie bus, leaving from 9 Bleecker St, then the Yippie HQ, with Aron “Pieman” Kay, the staff of “Rock Against Racism,” which was a Yippie-connected music-promotion group, and a variety of antifascist enthusiasts looking to protest against the organized racists.

When we arrived in D.C. hundreds of angry multicultural protesters were already there, some openly frustrated the Klan was nowhere to be seen, having been kept away from the protests by the cops.

I joined a group of protesters heading along 15th St. from Constitution Ave. toward the White House. Suddenly I got a whiff of tear gas, not the usual mild protest variety, but the melt-your-eyeballs type that really hurts. The group I was with ran into a Neiman Marcus department store. As salespeople swept the expensive stuff off the counters, we reached the bathrooms, washing our faces of the caustic chemical.

As I came out, I was surprised to run in to my much more buttoned-down brother, who it turned out had a post-college job as a floor walker at the department store. We both laughed and he briefly joined the protest.

As our group made the turn onto Pennsylvania Ave. we were passed by a couple of hundred communists associated with the then infamously confrontational Progressive Labor Party, angry, chanting with red flags flying. I was across the street as this Maoist group passed the driveway to the White House and then, on some sort of signal, rushed the grounds.

I watched in shock as, within seconds, a phalanx of black-clad cops in gas masks emerged from nowhere, marching in formation toward the protesters who were battling to get past the guards on the White House lawn. The cops hit back with volleys of tear gas driving the protesters onto the street.

The cops withdrew as protesters scattered. But the PLP folks, a rare multiracial leftist group in those days, attacked a second time, pushing even further onto the White House grounds. The cops hit back hard and drove the protesters to Lafayette Park, where other protesters joined in ripping paving bricks from the park walkways and raining them onto the police. At the time, it was the most dangerous thing I had ever seen. Somehow nobody was killed, though some cops were lightly injured. Thirty-five people were arrested.

A brief riot spread through the night, a few windows broken, a few street fires. By the next day it was like it never happened.

Our bus driver was hit over the head, but recovered, and we made it home the next day after a night at the Yippie D.C. HQ in a rented brownstone on Capitol Hill.

Most progressives thought the PLP was wrong to risk injuries with their adventurism, shifting the focus from the Klan to the rioting protesters. You don’t hear much about the group anymore as the left at the time was more focused on the failed attempt by the Rainbow Coalition to get Jesse Jackson elected president

But as I watched the Trumpoids bum rush the Capitol on Jan. 6 it brought back memories of when the left were the invaders.