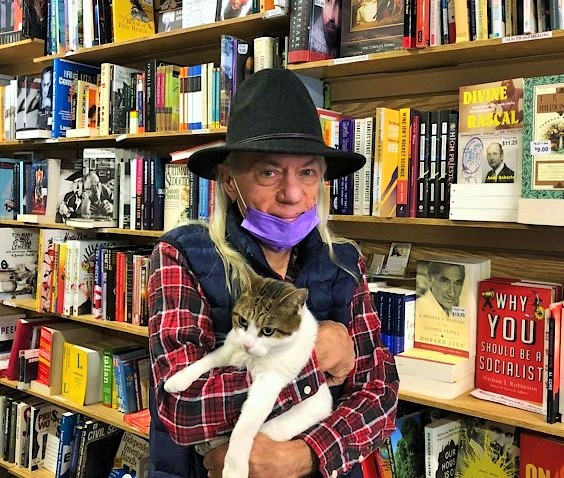 The sound and the furry: Bookstore cat is a story unto herself

BY BEN TOGUT | Before Unoppressive Non-Imperialist Bargain Books relocated from its Carmine Street location in June, one of its greatest attractions was a 2-year-old cat named Alex. After she was taken in by Unoppressive owner Jim Drougas, Alex’s vivacious personality soon became a major selling point for the bookstore.

According to Drougas, Alex often lounged outside of the store and tried to lure in potential customers with her charm alone.

Enchanted by her presence, people often followed Alex into the place and made purchases, as a result.

Drougas began placing amusing signs around the store to contribute to Alex’s mystique and to attract future customers.

“I put a sign up that said, “Alex will give psychic readings,” Drougas told The Village Sun. “Some people took it seriously and asked “Wait, how can a cat do that?’” To capture Alex’s occasionally combative manner, Drougas placed a sign in the store that read, “Alex is named after AOC. If you’re a Republican, she’ll lash out at you.”

Despite Alex’s magnetic personality, her antics could serve as an inconvenience for Drougas.

“Sometimes Alex wouldn’t want to stay in the store overnight and would try to hide from me when I locked up,” the merchant explained. “I would have to wait an hour and come back before she would agree to go inside. Other times people who lived near the bookstore would call me at 3 a.m. and say they saw her outside the store and I would drive over to pick her up.”

Alex’s independence concerned Drougas. During the day she often wandered over to the Downing Street Playground near the bookstore and Drougas worried for her safety.

“I thought a kid on the playground might see her and think, ‘Look, a cat! Let’s take her home!’ But, of course, she never let that happen.”

Despite her near-influencer status, Alex does not have her own Instagram page. However, Drougas said, “She was posted [on Instagram] often by customers — and fawned over constantly.”

In June, after a rent hike forced Unoppressive Non-Imperialist Bargain Books to relocate, Alex moved a bit uptown, where she is staying with some of Drougas’s friends. However, despite Alex’s departure from the bookstore, there is hope that she will return in all her feline glory. Drougas expressed that the owner of Temperance, a wine bar that is now home to Unoppressive’s “summer pop-up,” is open to having Alex in the space.

“Maybe,” Drougas hinted, “she’ll be back for events.”