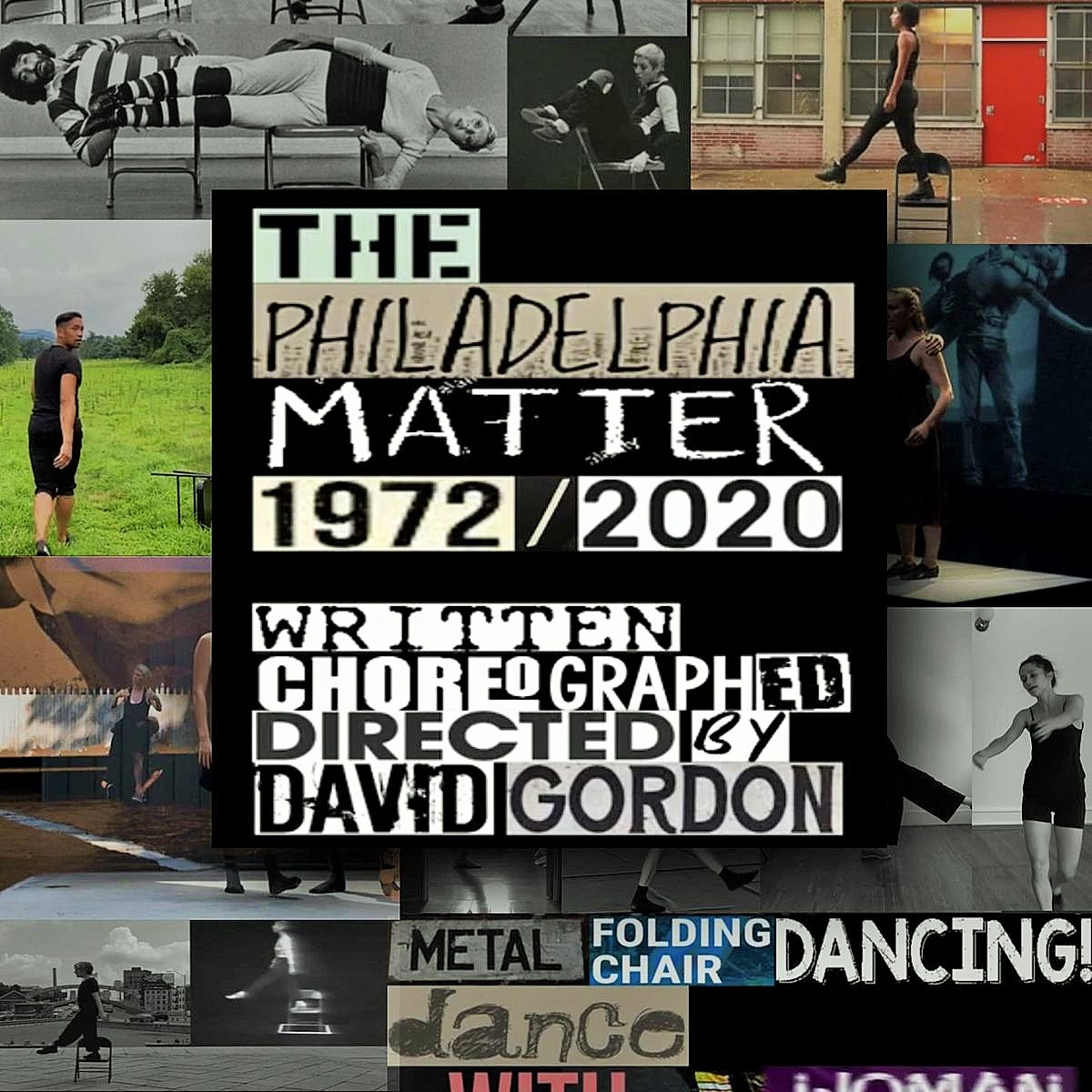 BY STEPHEN DiLAURO | David Gordon’s “The Philadelphia Matter – 1972/2020” is THE dance film of the pandemic.

Soho residents Gordon and his wife Valda Setterfield have long been stalwarts in the Downtown Manhattan performing-arts scene.

David Gordon’s work is widely recognized as a progenitor of what came to be known as post-modern dance. He was one of the first performers to present his original work at Judson Church on Washington Square, where he became a founding member of Judson Dance Theater.

I saw “The Philadelphia Matter – 1972/2020,” a 60-minute documentary, on a large screen at an outdoor event in the garden of the historic Christ Church in Philadelphia’s Old City neighborhood, purely by chance. I was visiting my old friend Jules Goldman at his Books and Art emporium — a seemingly endless and ever-changing accumulation of used art books and posters and paintings — right across Second St. from the church. A group of us decided to go to the screening together.

Given the historic setting, in general, and Christ Church, in particular — George Washington and Benjamin Franklin were members of the congregation — I was intrigued by the New York-Philadelphia connection that led to the creation of the film. I have often mused that while the democratic principles (for us white people) of the United States were conceived in and promulgated from the City of Brotherly Love, the Hudson Bay Company was establishing the first of many rapacious, domineering corporations that continue to undermine those same freedoms at every turn. However, the movie does not touch upon this dichotomy. It sticks to its subject and does a brilliant job of it.

The weather was perfect as the sun set and a welcome breeze gentled the heat of what had been a sweltering July Friday. Cocktails and wine were served gratis, and a small crowd of 30 to 40 people sat on folding chairs and garden benches. I had no idea what to expect.

David Gordon is known for introducing the use of text and dialogue in dance. The title and credits for the movie appear on the screen looking like the words cut out from magazines for a ransom note. This motif continues throughout as the narration — short phrases and sentences, some of it reminiscent of the late Robert Creeley’s poetry — is delivered in Gordon’s and Setterfield’s voices while the cut-out words appear on the screen. It is an effective, attention-grabbing technique from beginning to end. Near the beginning there is some word play exploring the question “what is a virtual dance piece?”

Over all, the technical aspects and editing, overseen by designer Jorge Cousineau, are stunning and underpin the effectiveness of “The Philadelphia Matter.”

Three of Gordon’s pieces — “Song and Dance,” “Close Up” and “Chair” — form the basis of the action. Gordon engaged some 30 dancers from Philadelphia and sent them rehearsal videos and other materials to learn moves in each piece. Most of the dancers performed the pieces solo for their own video smartphone cameras. It is interesting that while the videos are effective, there are no photographs of the performances.

“Song and Dance” is an early solo piece. “Close Up” is a duet originally performed by Gordon and his partner/wife. It shows the two intertwining and then slipping away, unknotting if you will. Some dancers who performed this piece in tandem for the camera were masked for COVID. Others executed the moves alone, which added a certain poignancy.

Viewers see footage from a performance of “Close Up” on a temporary stage outside the World Trade Center that was rained out on Sept. 10, 2001. It was eventually performed again at the Joyce. The public tragedy inherent in this anecdote, as presented in the film, presages the personal drama that struck when Valda Setterfield was injured in a serious automobile accident. “Chair” was created as a dance piece and as a form of physical therapy.

Initial presentations and rehearsals of the three pieces are often the focal point throughout, surrounded by panels of the quarantined dancers doing the same work. Often, the narration will include quotes from reviews of the original presentations. Other times, Gordon’s choreographic directorial notes serve as the basis for the vocal and the accompanying cut-and-paste visual narration.

David Gordon, it seems, has won every grant and award available to post-modern dancers, and rightfully so. If you are unfamiliar with his work in person — where it is most effective — this hour-long video can serve as a primer that may have you eager to join an in-person audience for a live performance as opportunities become available.

Meanwhile, though, “The Philadelphia Matter – 1972/2020” is available to stream for free on YouTube, along with a “making of” video and a panel discussion with David Gordon.

Christ Church was the commissioning organization behind “The Philadelphia Matter 1972/2020” and funding was provided by the Philadelphia-based Pew Center for Arts and Heritage. The Old City of Philadelphia is a charming quarter which retains much of its historical character, undisturbed by real estate developers.

DiLauro is a playwright and musician.