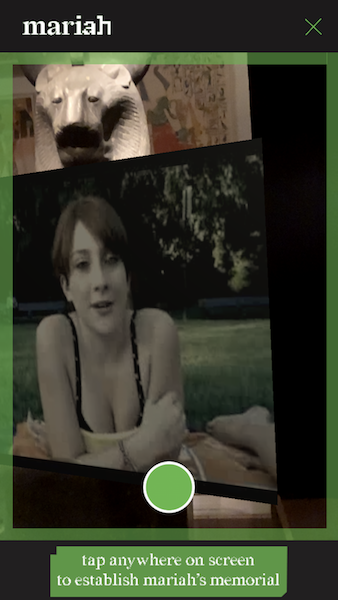 An augmented-reality tour has been secretly installed at the Met as a memorial to Mariah Lotti, a teenager who died from an OxyContin OD. (Photo by Paul DeRienzo)

BY PAUL DeRIENZO | Last week the Department of Justice announced felony convictions against the bankrupted drug company Purdue Pharma, maker of the opioid painkiller OxyContin. The company pleaded guilty to kickback schemes with doctors who prescribed the drug and faces $8.3 billion in penalties. The Sackler family, the company’s founders, were hit with $225 million in civil penalties.

The Centers for Disease Control and Prevention reports hundreds of thousands of have died in the United States alone from overdoses linked to OxyContin since Purdue Pharma developed the drug 40 years ago.

It’s unlikely Purdue Pharma will actually pay anything close to the settlement, however, because the company has been in bankruptcy since being fined $600 million in 2007.

Activists tracking the multitude of lawsuits against the drugmaker say the settlement was probably motivated by President Trump, who wanted a deal to tout before the election. But money isn’t what the families of OxyContin overdose victims want.

Sackler family members are major art collectors and philanthropists and have donated priceless items to the Metropolitan Museum of Art. The huge Sackler wing of the museum houses the entire Egyptian Temple of Dendur.

While some activists have been demanding divestment of Sackler gifts to the museum, artist Adam DelMarcelle, who lost his brother to heroin, has a different idea. Along with co-designer Heather Snyder Quinn, he has created an augmented reality protest, that unknown to the Met, has been digitally installed throughout its hallowed halls.

The secret installation is based on the principle of the Pokémon Go games that entrance children with a treasure hunt based on clues that turn up in hidden digital locations, viewable on their smartphones, sending the searchers on to the next clue.

But instead of describing the museum’s art like a standard audio tour, DelMarcelle’s augmented reality smartphone app introduces the viewer to a 19-year old woman, Mariah Lotti, a Connecticut teen who died of an OxyContin overdose in 2011. Besides hacking the museum’s artifacts with superimposed facts about the Sacklers and OxyContin, the app features audio of Mariah’s mother telling the story of her daughter’s life and death.

DelMarcelle has a personal connection, in 2014 his brother Joey overdosed on heroin. Now an adjunct professor at Pennsylvania College of Art & Design, DelMarcelle says the overdose “changed the direction of my life,” causing him to “zero in more closely on the addiction epidemic that’s happening in America.”

DelMarcelle’s goal is — without the Met’s permission or knowledge — to “rebrand the gallery as a memorial to one person who died as a result of the Sackler family’s negligence.”

The Village Sun tried out the Mariah app at the Met on Saturday after arranging an appointment online. The Met is pay-what-you-want for New York residents, but you need a reservation because of COVID restrictions.

This reporter wandered over to the Sackler wing and pulled out my phone, fired up Mariah and started searching with the camera. In a few seconds the app had recognized the location and presented an audio recording of Mariah’s story superimposed on the imposing Temple of Dendur.

A guide pops up in the app with directions to the next stop on what is essentially an OxyContin crime tour combined with a loving memorial to Mariah.

The next stop on the hacked tour was the svelte figure of Aphrodite, displaying a message about how Arthur Sackler pioneered bribing doctors to prescribe the company’s drugs.

Then it was on to another artifact, the imposing statue of the goddess Sakhmet; a click of the app brings up a video of Mariah, with short dark brown hair, speaking against the backdrop of ancient Egyptian history.

A museum employee looked in my direction.

“You can’t take videos in the museum, only pictures,” she said, as she hustled in a rush down the hall.

The app not only hacks the artifacts, but the audio tour of the museum itself. DelMarcelle adds, “As you walk though the museum you find more and more artifacts, and you’re going to learn more about the Sackler family, but also the story of Mariah.”

DelMarcelle says the technology of augmented reality is a subtext to the protest.

“Tech firms are trying to buy the advertising space around your head to provide a tailored buying experience every time you pick up your phone,” he says. “They’ll figure out a way eventually to let us not use it this way. But, in the meantime, it allows me to totally take over a physical space without any permission from the capitalists who own those locations.”

DelMarcelle says he opposes “scraping the Sackler name off one of the wings of the Met,” because, “we might as well scrape all the rest of them off too because they all made fortunes in America off the backs of the working class.”

His ultimate goal is to “tell a more earnest story of America,” by augmenting the space with a new narrative.

Meanwhile, the CDC reports that in 2018 the United States had nearly 47,000 opioid overdose deaths; two out of three involved synthetic opioids like OxyContin.