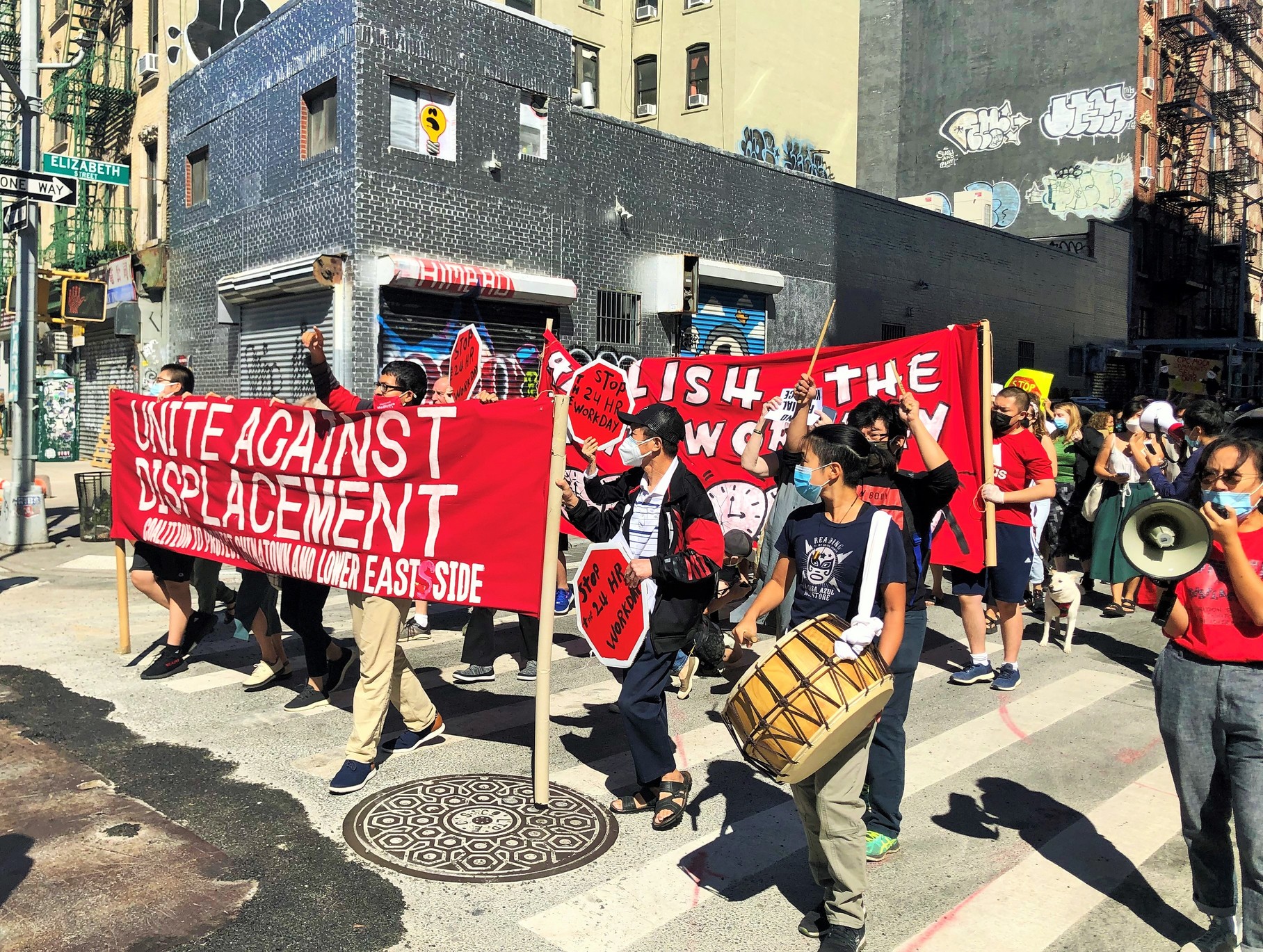 Youth Against Displacement, along with Chinatown and Lower East Side residents, marched last month against the city's plans for a Lower Manhattan megajail and other issues, like ending 24-hour homecare. (Photo by Dashiell Allen)

BY YOLANDA ZHANG | Hundreds of protesters recently shook the streets of Manhattan’s Chinatown, marching against the Museum of Chinese in America’s racist destruction of the community. However, the protest quickly spurred media outlets like the Daily News to put out hateful and erroneous editorial to save MOCA’s face and defend the city’s displacement agenda.

If one cares to look back at these “community engagement” meetings, one will remember the community’s resounding “NO!” to the environmentally hazardous towering 29-story new jail.

Many of us wonder, how dare a white mayor, Mr. de Blasio, venture into the last foothold of a multiracial working-class Manhattan. Was it because MOCA lent a local face and a Chinese-American representation to the city’s targeted displacement and destruction of an Asian residential neighborhood?

MOCA, the sacred cow of Mr. de Blasio, alone grabbed 70 percent of the total “community giveback” money — we charge because of its consent to the construction of the megajail in Chinatown. By accepting the $35 million (not $39 million as the Daily News editorial incorrectly states), MOCA willingly green-lights the city’s disrespectful and dismissive treatment of Chinese and Latinx on the Lower East Side as second-class citizens, who shall sacrifice their jobs, homes, lives and health for the new jail.

Yes, the museum, in fact, did all that as an Asian-American organization. And when confronted by the community members, young and old, MOCA’s director, Nancy Yao Maasbach, asked the Chinese protesters if they even knew what was written in English on their protest signs.

Yao laid bare the museum’s true, condescending attitude toward the Asian community it claims to represent. She quickly accused the Chinese seniors of being “paid protesters,” adding that Chinese getting paid to protest is a “historic trend.”

That’s called racist and selling out. De Blasio, like his predecessor, Mayor Bloomberg, understood that local elites can provide the best cover for government decisions that will disproportionately harm the average community resident and small businesses — and so did MOCA.

Second, let’s take a closer look at the museum’s co-chairperson, Jonathan Chu. Along with his father, Chu owns nearly all the commercial properties in Chinatown. He displaced one of the most prominent Chinese-American cultural icons — the historic and largest dim sum hall on the East Coast of the United States, Jing Fong restaurant. Chu’s essentially evicting Jing Fong amid the pandemic caused roughly 180 mainly immigrant Chinese workers to lose their jobs.

As a result, Jing Fong will be relocated to a new space much smaller than the original dining hall, while the neighborhood will lose the economic lifeblood of the community.

Chinatown and the Lower East Side have already been disproportionately hurt by the discrimination and racism born of pandemic fear-mongering. Instead of helping local businesses recover, the de Blasio administration failed to intervene to save Jing Fong or to provide additional financial support to the many other struggling businesses in Chinatown.

But none of this is a surprise since the de Blasio administration continued the racist policy of excluding Chinatown and the Lower East Side from zoning protections. Namely, the mayor refused to pass the Chinatown Working Group’s community-led rezoning plan, which is similar to one that was passed and implemented in the predominantly white East Village community more than a decade ago.

Disregarding the Coalition to Protect Chinatown and the Lower East Side’s letter that urges the city to save Jing Fong restaurant, Mr. de Blasio has been pushing to pass the destructive rezoning of Soho/Noho/Chinatown instead. Along with the rich developers who will build more luxury high-rises in Chinatown, the Chu family would be a prominent beneficiary of the Soho/Noho/Chinatown rezoning since they happen to own major properties within the boundary of the proposed upzoning area.

And who would the rezoning plan hurt? The majority of low-income families and small business owners in the surrounding area of Chinatown and the Lower East Side, who would see rising rents and eviction notices.

Of course, the de Blasio administration purposely hides this fact and instead pushes the narrative that the plan would somehow achieve “racial equality.” The Daily News prides itself as a progressive outlet that calls out the mayor’s mistakes and eccentricities. But it betrayed its own mission when it comes to concrete policies by, again, in an editorial, actively promoting Mr. de Blasio’s divisive Soho/Noho/Chinatown rezoning.

It is jaw-dropping to see some of New York’s most respected media become the mouthpiece for MOCA, Chu and de Blasio and defend their racist acts and displacement agenda. If these news outlets, like the Daily News, have any decency, they should instead spread the word about the community fighting against racism and displacement. They should report on the most recent petition calling on the city to protect Chinatown and the Lower East Side by stopping the new jail and luxury high-rises and helping the community recover from the pandemic.

More than 3,000 community members have signed onto the petition.

Zhang is a member, Youth Against Displacement.