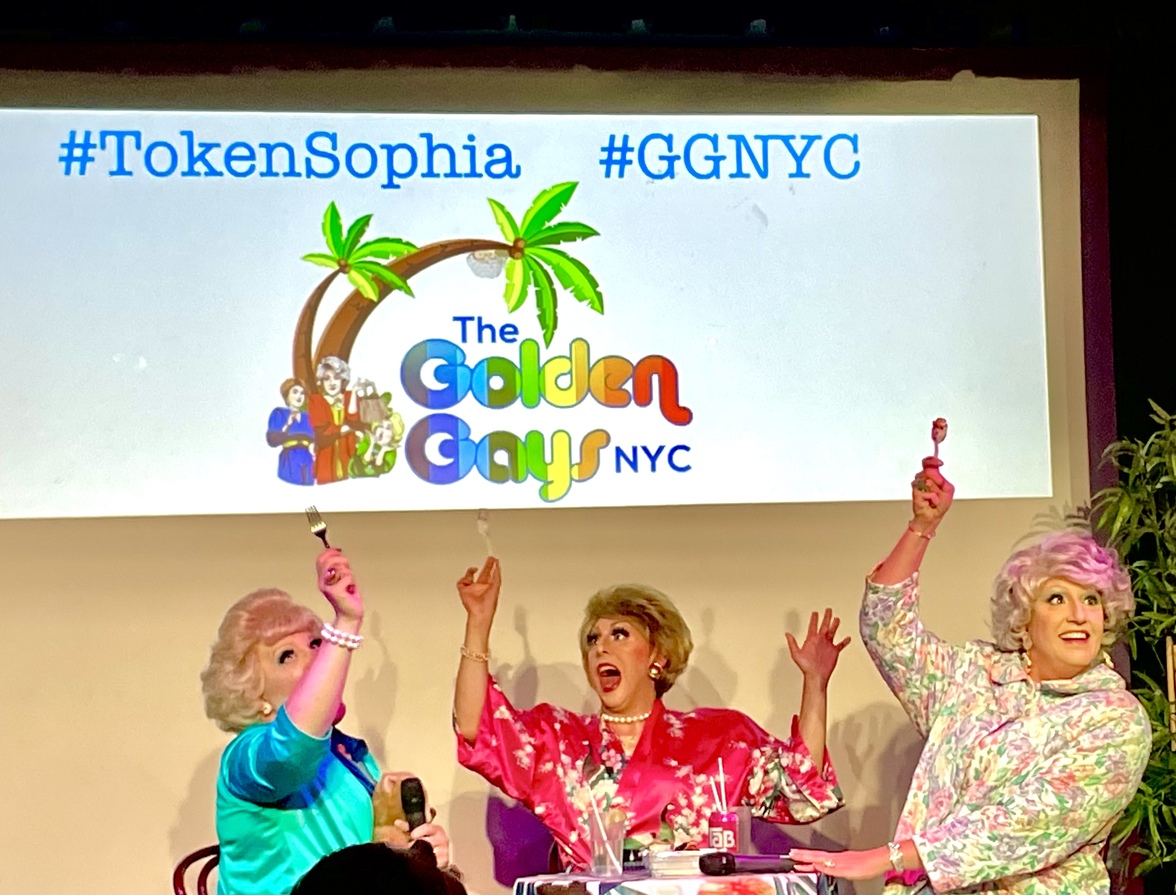 BY AIDAN SEIDEN | Boisterous laughter mixed with booming pop music pouring out of Lower East Side bars and restaurants, filling Clinton St. with energy and excitement.

A group of college students outside Rizzo’s Fine Pizza were engaged in an intense quibble on the legal proceedings of pop star Britney Spears. Unknown to them, nearby lay a hole-in-the-wall bar and venue space, almost invisible to the unsuspecting eye.

If not for the large fuchsia-colored “C” stamped on the front door, passersby would not know of the place’s existence. Unless, of course, they were avid fans of the 1980s sitcom television show “The Golden Girls.”

As you arrive at this subterranean locale, called Caveat, an employee wearing a face mask examines your driver’s license and COVID vaccination card, enabling a safer experience and the option of not wearing a mask during the show.

After going through the door, down a flight of stairs and along a corridor festooned with fliers of future events, you are greeted by a dramatic curtain made of heavy red velvet fabric, one of many purposeful details that add to the bar’s cabaret-style atmosphere.

After being escorted to your seat, past various bowls of condoms and walls of assorted books haphazardly thrown on a bookshelf, you notice the gigantic screen at the back of the bar with the projected words on it “The Golden Gays NYC” in the colors of the L.G.B.T. Pride flag.

On Wed., June 23, people of all ages gathered here, eagerly awaiting the arrival of the Golden Girls…well, almost.

No, sadly, Beatrice Arthur, Betty White, Rue McClanahan and Estelle Getty were not making a surprise appearance. But there was something equally as entertaining and shocking occurring that night.

For the first time on their Hot Flashbacks Musical Adventure tour, the self-proclaimed “Hilarious Camp Trio,” The Golden Gays were performing their live drag #TokenSophia show, a nod to actress Estelle Getty, who played Sophia Petrillo on the show.

Just after 8 p.m., the overhead lights dimmed and the crowd of fans erupted into an effervescent roar of applause and cheering.

One by one, the cast of The Golden Gays emerged from the cleverly hidden dressing room, dancing and smiling, eliciting even louder screams and laughs. Instantly, the audience was entranced.

“It felt like the bar was a time machine and we were transported back to the 1980s to the live filming of an episode of ‘The Golden Girls,’” said audience member Cally Kress, 22.

Kress prides herself on being a “Golden Girls” fanatic who also possesses the remarkable ability to recall the smallest detail from the show.

“I had a great time. I mean how could you not?” she said, excitedly, afterward. “They engaged so well with the audience, their singing was incredible, and, honestly, I was convinced the entire time that that was the original cast of ‘The Golden Girls.’”

In fact, The Golden Gays, which formed in 2017, are Andy Crosten, Gerry Mastrolia and Jason B. Schmidt.

Following several outfit reveals, numerous dance breaks and dozens of perfectly timed jokes, all in the span of one hour, the show came to a dazzling conclusion.

“For my first time doing the show, I think it was phenomenal,” said  stage manager Hannah Bedel, 22. She said she couldn’t be more thrilled to be working with such a talented group of “drag-tors,” as in drag actors.

“It’s not just the normal behind-the-scenes work that I like, it’s the energy that they bring,” she said. “It’s fun to play off of them and the audience.”

Although The Golden Gays have wrapped up their shows in New York City, luckily, you can still catch them during Pride on Sun., June 27, near Marie’s Crisis on Grove St. from noon to 3 p.m.