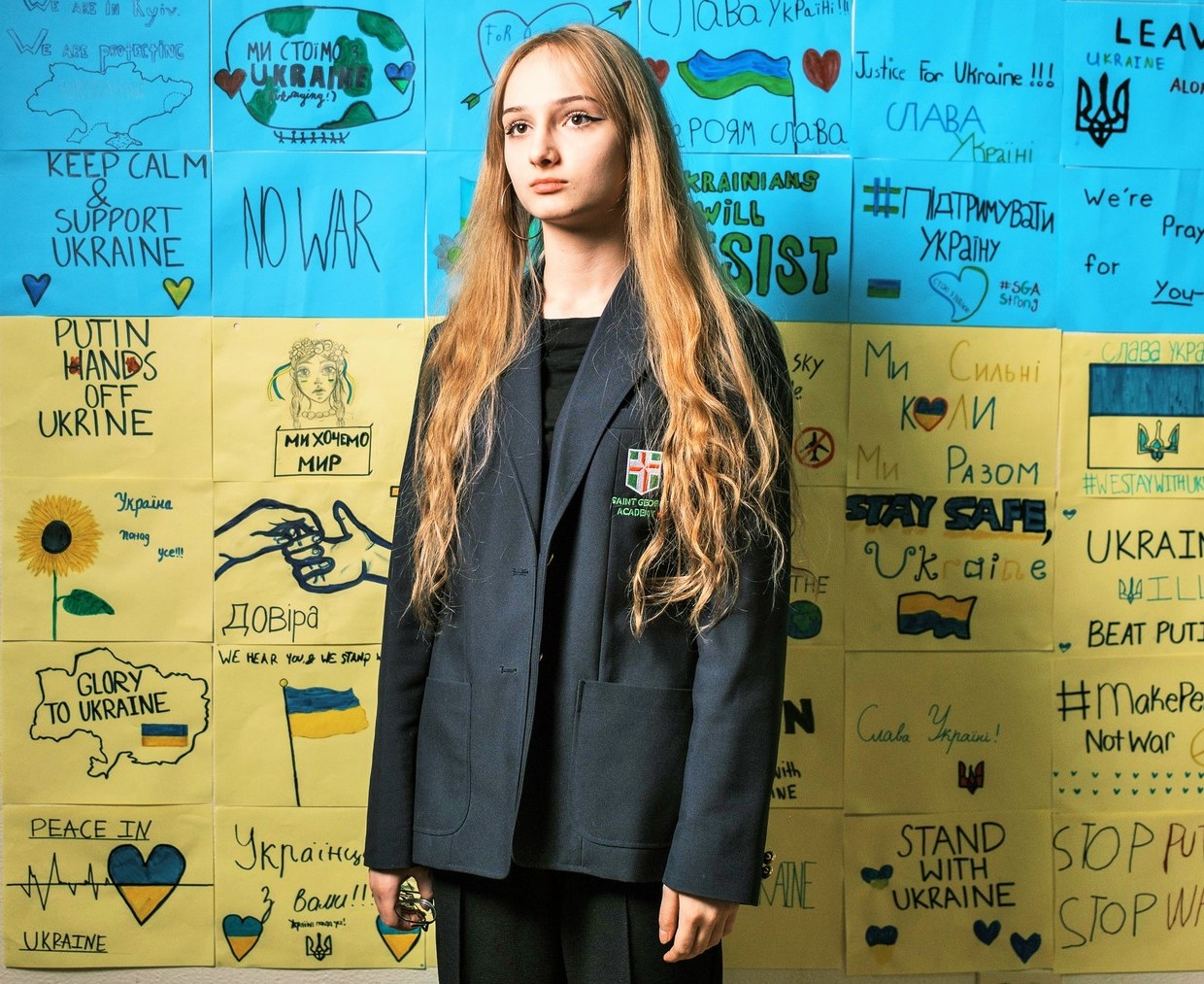 BY KEITH J. KELLY | Diana Yuzuik has been watching and waiting for Russian soldiers to invade her home in the village of Rivne in western Ukraine, glued to a security feed that sends video to her phone.

While her village has not seen the bloody combat of Kyiv or southern Ukraine, it has absorbed long-range shelling, and Yuzuik witnessed a recent attack by Russian missiles that she later learned killed 19 civilians.

But the 15-year-old is watching everything from the safety of New York City, where she is staying with her grandmother.

“They always come at night,” she said of the Russian missiles that have rained terror on her home city.

Yuzuik is one of a handful of teens from the war-torn country who have recently landed at St. George Academy, a high school in the East Village associated with the Ukrainian Catholic Church of the same name.

Speaking on Tues., March 15, Principal Andrew Stasiw said that he had just admitted his fifth Ukrainian refugee since the Russian invasion of that country began on Feb. 24.

“We’re a boutique prep school, but we are taking in as many as we can,” he said.

Among the new students is Maksym Kosar, a 17-year-old from Irano Frankivsk, some 325 miles from Kyiv. In the run-up to the war, Maksym had a backpack filled with important documents, a passport, medical supplies and bottled water. The day the war began on Feb. 24, “My father told me Russian missiles had hit the airport near us,” the teen recalled. “He said, ‘I am taking you to Poland.’”

His father had enough gas in the car to drive to the border where Kosar, a high-school junior, was dropped off alone. His mother, Viktorria, was already in the United States, having lived here since splitting from her husband seven years ago. His father, a production manager at a factory, is now “in the territorial defense force if needed.

“I’ll be here until the war ends,” Kosar said.

Yuzuik, a tenth-grader, was visiting her grandmother in New York when the war broke out. She has stayed in touch with her hometown classmates.

“They are very afraid,” Yuzuik said. “Every time the sirens go off they have to head to the bunkers. They go off six times a night.”

Marta Slaba is from Lviv, the second largest city in Ukraine, which has come under heavy shelling by Russians in recent days. She left with her mother after war broke out, but her father stayed behind to join the resistance.

Principal Stansiw said he expects the trickle of Ukrainian students to increase in the weeks and months ahead.

The war has put a special emotional stress on the school, where 40 percent of the 100 or so students were born in Ukraine and most of the rest of have strong ties to their homeland, as either first- or second-generation Ukrainian Americans. Stasiw said some students miss class because they have been up all night monitoring events in their embattled homeland. One student from Kyiv, he said, cries every day.

It’s touched the family of Stasiw, as well. His parents are both Ukrainian-born, and he said that his cousin Anna Stasiw spent days in a bunker in Kyiv with her nine-year-old son, Artur, “scared to death” as Vladimir Putin sent nearly 200,000 troops across the the eastern border and began shelling the capital city. Anna and Artur eventually made their way to Poland while her husband stayed behind to fight.

“People say they are worried about starting World War III, but it’s already happening,” Stasiw said. “The resistance fighters are not just saving Ukraine, they are saving Europe. Putin will not stop with Ukraine.”

He admitted that he wishes Putin’s own people would “take him out … . What is happening now is genocide.”

Against the hustle and bustle of a normal school day — studying science, math or social studies and preparing for Regents exams — the war is never far from the thoughts of the students or faculty.

A mural in the school’s hallway is covered with signs made by the students before the newest five arrived. “Stop Putin, Stop War,” reads one. “Ukraine Will Resist!” “Shelter Our Sky/We Will Handle the Rest.” “Today Ukraine is Saving the World!” Some are written in Ukrainian.

“They are all brilliant students,” Stasiw said of the new enrollees. “But they worry they may never see their loved ones back home again.”