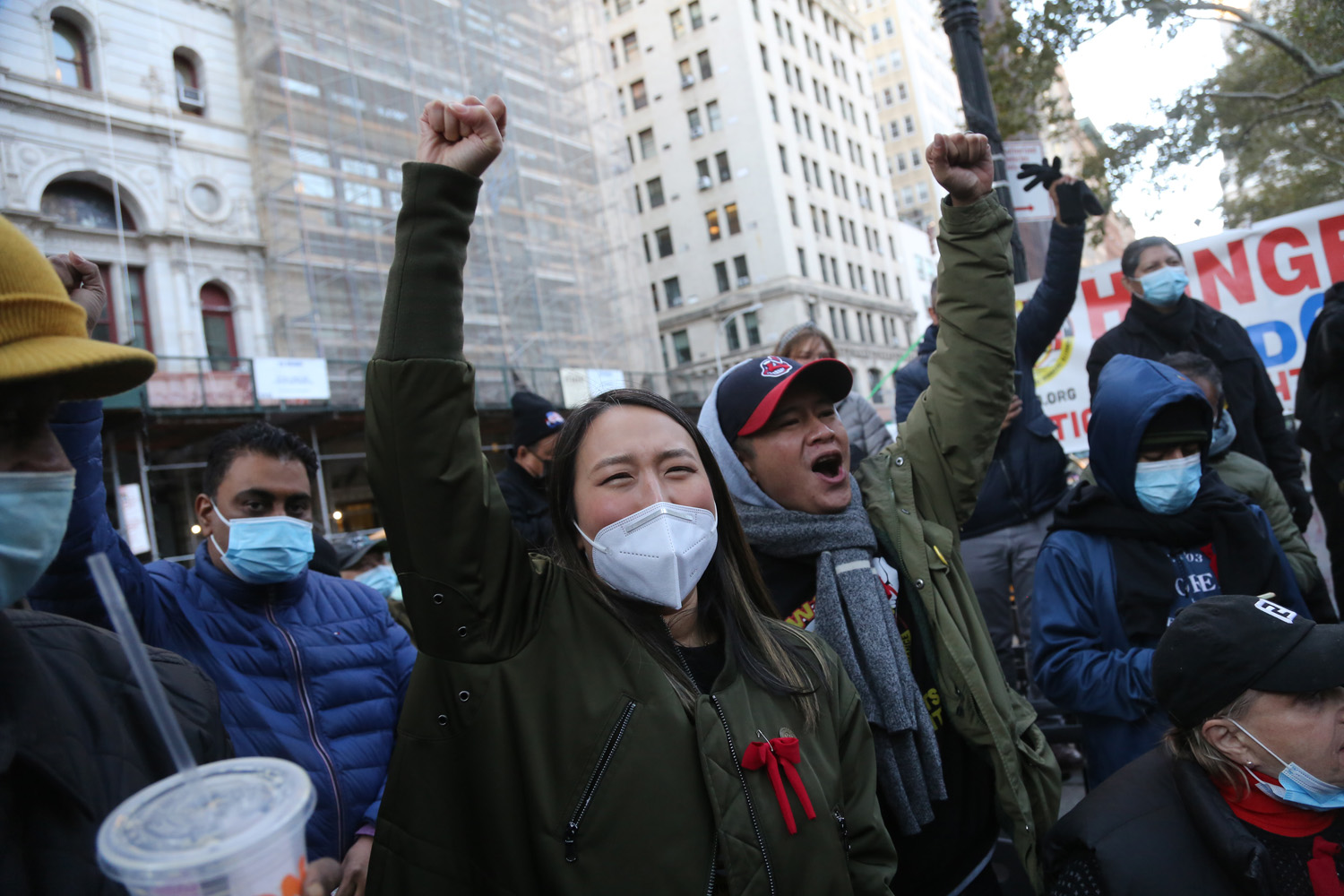 Yellow cab drivers and Assemblymember Yuh-Line Niou, center, celebrated the end of their hunger strike, which Niou participated in for the entire duration. (Photo by © Jefferson Siegel)

BY THE VILLAGE SUN | Medallion-owning taxi drivers ended a 15-day hunger strike at City Hall on Wednesday after an agreement was reached with the city’s biggest medallion lender.

Around 5 p.m. the strikers and their supporters broke into loud cheers as the deal was finally sealed. Senator Chuck Schumer was a key part of the negotiations. A phone was held aloft and Schumer addressed the hunger strikers, after which there was another round of cheering.

“Celebration” by Kool & the Gang started blaring on a boombox and the cabbies — the ones who had enough energy — rose from their wheelchairs and started dancing with joy. Exulting along with them was Lower Manhattan Assemblymember Yuh-Line Niou, who joined them on their 15-day hunger-strike ordeal.

We just broke our hunger strike. And let me tell you. The dates and avocado are…the best I’ve ever had. pic.twitter.com/GfBCT86oLs

Under the agreement, Marblegate Asset Management will restructure outstanding loans to owner-drivers to a principal balance of $200,000, which will be constituted as a $170,000 guaranteed loan, plus a city grant of $30,000. The restructuring will cap debt-service payments at $1,122 per month for eligible medallion owners.

The New York Times reported that the taxi industry’s other lenders, who carry about 60 percent of the loans that drivers take out to buy medallions, have not agreed to the plan.

The drivers had claimed a debt-relief plan announced this past spring by City Hall was insufficient. They have been hit by a double-whammy of buying medallions at inflated prices, followed by the city’s allowing a flood of ride-share taxis, like Uber and Lyft, to hit the streets in recent years that together cratered the value of their medallions. In despair, some debt-strapped hacks began killing themselves.

“I was so proud to broker a deal for desperately needed debt relief for hardworking taxi workers,” Schumer said. “The medallion debt crisis has gone on for years, taking lives and livelihoods. I commend Mayor de Blasio for his leadership, the New York Taxi Workers Alliance for their steadfast advocacy, and Marblegate for their good-faith effort to forge a workable solution. Together, we will bring this ongoing situation to a just resolution for the thousands of cabbies who work every day to serve this city.”

Bhairavi Desai, executive director of New York Taxi Workers Alliance, a union of 25,000 taxi and app-based driver members, hailed the agreement and the end of the hunger strike.

“After a long and painful journey, we made it home to victory,” she said. “Today marks a new dawn, a new beginning for a workforce that has struggled through so much crisis and loss. Today, we can say owner-drivers have won real debt relief and can begin to get their lives back. Drivers will no longer be at risk of losing their homes, and no longer be held captive to a debt beyond their lifetime.”

In one of her tweets on Wednesday, Niou thanked her staff for “holding down the fort” during the past two weeks while she participated in the hunger strike. She also gave a grateful shout-out to Congressmember Alexandria Ocasico Cortez for helping keep the cabbies’ plight in the spotlight.

Niou said she has been advised to take it slow as she starts to eat again, but is really looking forward to chowing down on some congee.

I’m gonna congee so hard in three days. They have us on a refeeding program. Rice isn’t allowed til later. But lemme tell you….. https://t.co/ACrxtplc9c