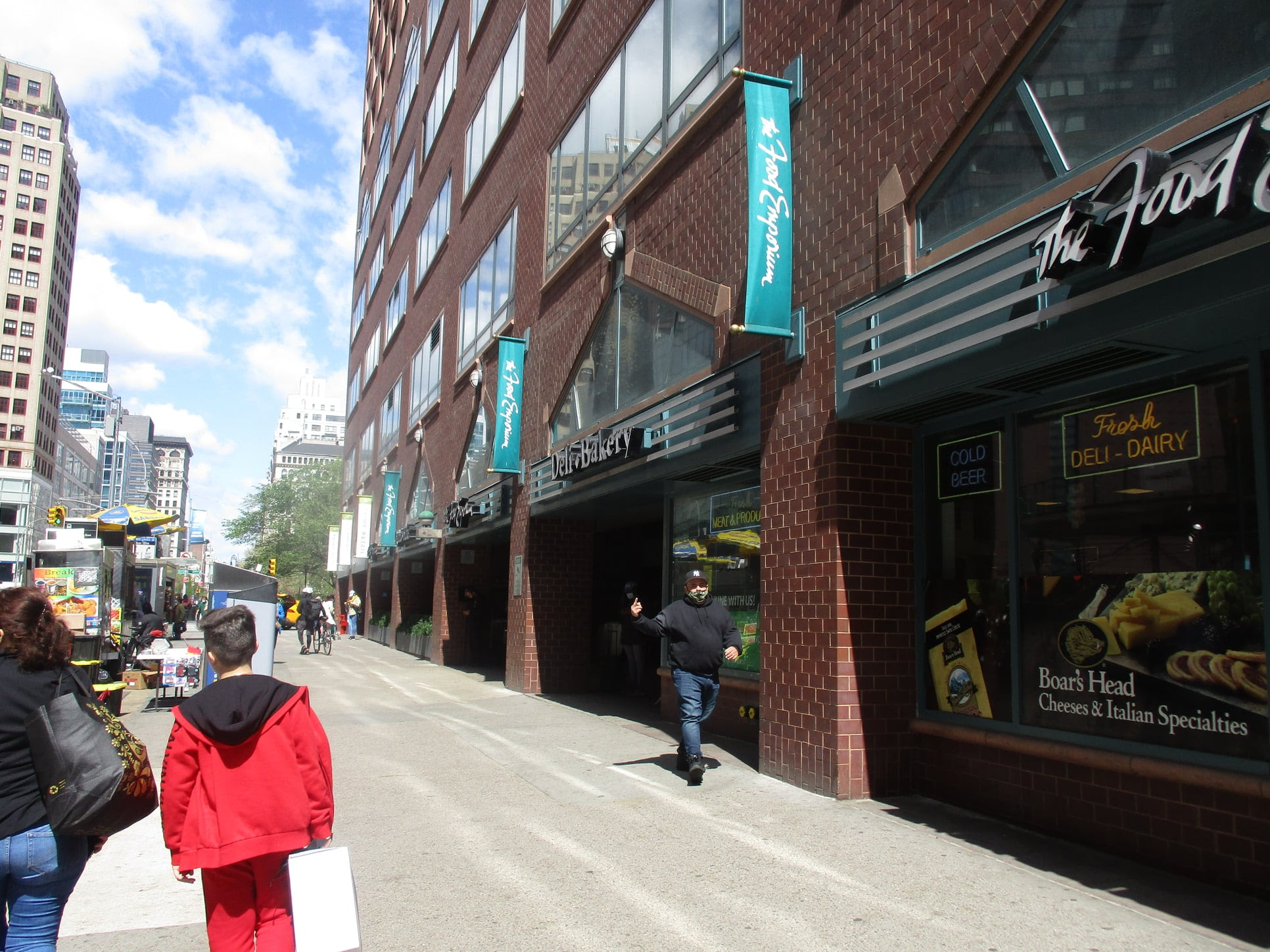 Although the store’s juice bar is no longer open, a sushi chef continues to prepare delicacies for customers, among them office workers emerging from from the 4, 5 and 6 subway lines. They take the escalator right up to the brightly lit nearly 33,000-square-foot space that occupies a ground-level condo at the base of Zeckendorf Towers.

Some patrons come in and snap up bargains on sale, like 10 yogurts currently available for $10 in the dairy section. Others have spent considerably more for elegant birthday and wedding cakes custom made in F.E.’s small but once widely varied bakery.

Some breads remain but the elaborately decorated cakes already seem like relics of the past now that the Food Emporium branch, with its corporate address at 10 Union Square East, is on its way out. It’s scheduled to disappear May 30 when a Target store becomes the new tenant and begins offering an assortment of general merchandise from food and beverages to clothing, housewares and electronics.

Target got a nearly 16-year lease in early February 2020. The deal was negotiated by Richard Skulnik of Ripco Real Estate, representing Target, while Fred Posniak of Empire State Realty Trust represented the ownership, according to Lois Weiss of the New York Post, who noted that the asking price was $183 per square foot. Neither agent was available on Friday and into Monday.

Originally, the deal allowed Food Emporium to remain on the premises until spring 2023 but then the closing date was pushed up.

“What can you do? Target is [now] the owner,” said Food Emporium’s weekend manager, Raziaq Khalaliq, 55, an immigrant from Kashmir. He noted that none of F.E.’s current Union Square employees, including himself, will be retained by the new management. During conversations with The Village Sun, he estimated that “about 20” staffers out of some 60 employees have already left. He shook his head no when asked about union representation and expressed hope that Zeckendorf Towers, whose residents have quick access to Food Emporium either by foot or delivery, would step in to save the store from a corporate octopus.

Jill Lewis, a spokesperson for the Minneapolis-based Target, said there are currently 29 Target stores in New York City’s five boroughs. Asked if Target’s “small-format” 27,000-square-foot store in the East Village, which opened in July 2018 at E. 14th St. and Avenue A, would close and move staff and merchandise to Union Square, Lewis replied Monday in an e-mail: “We have no news to share regarding store closures for the NYC area.” In an earlier e-mail, she said, “I can confirm Target has plans to open a store in Union Square. We’re excited to bring an easy, safe and convenient shopping experience to new guests with this new Target store.” She added, “As we get closer to opening the store, we’ll have more specific details to share — including how the shopping experience will be tailored to serve local guests and the grand opening.”

Lewis did not provide the name of the Target’s owner at the Union Square property. However, on Feb. 6, 2020, the Commercial Observer identified the owner as Empire State Realty Trust. One Food Emporium employee speculated that Empire “bought out” F.E.s lease from Key Food Co-operative Inc., which acquired Food Emporium’s banner for four New York stores in 2015 from owner A&P in bankruptcy proceedings.

A Key Food employee at its headquarters in Staten Island confirmed that she knew who the store’s owner was but said, “I can’t tell you” the name. She claimed Key Food stores were individually operated, “like Dunkin’ Donuts franchises.”

Aforementioned Food Emporium weekend manager Raziaq Khalaliq confirmed that Key Food is regularly replenishing basics for customers at Union Square in advance of the transfer. The store has not yet posted a notice of its approaching demise on its entrances, including one on E. 15th St. that advertises daily senior discounts.

When the end comes for Food Emporium, it’s “going to be hard for people in the community, especially seniors,” said a young F.E. clerk at a checkout stand last week. She added, “I’m 20 years old and get stressed out walking in this neighborhood. Imagine what it must be like for them. They had everything they needed here, including delivery.”

Several seniors  were clearly unhappy by the impending loss of a local mainstay.

“It’s the only real supermarket in the neighborhood,” said a rail-thin senior woman energetically pushing a shopping cart down the aisles who declined to give her name. “I go to Whole Foods,” she continued, referring to the W.F. branch west of Food Emporium on E. 14th St. south of Union Square Park. “But they don’t have things like cleaning products,” she said. “Why does Target need another store on E. 14th St.?” she asked, her voice rising in indignation. “The one at Avenue A is awful, so crowded. Another Target here will bring more crowds to Union Square — not just the protesters, who I don’t mind, but people who come from other places because they think Union Square is the center of New York.” (Union Square’s world-famous Greenmarket is often touted as the largest in the city.)

Other older customers were surprised when they learned that the Food Emporium store would close at the end of the month.

“I usually shop at Whole Foods and Trader Joe’s,” said a silver-haired man who identified himself only as John. He hurried away, holding a purchase from the still well-stocked produce section. Trader Joe’s has a store on the same block as F.E., one of two along E. 14th St.

Retailing gurus have observed that grocery giants like Whole Foods and Trader Joe’s have been aggressive in the New York marketplace, likely drawing customers away from the more traditional supermarkets like Food Emporium.

Hristina Dimova, a 51-year-old immigrant from Bulgaria, said Saturday that she had not heard about F.E. closing, but noted this was her first visit. She lives close to the Target in the East Village at E. 14th St. and Avenue A.

That store’s grand opening in 2018 was harshly criticized for attempting to replicate the ambiance of the old hipster East Village with facades of tenements and images based on C.B.G.B, the famed now-defunct punk rock music club. Target soon apologized.

Over the weekend, a young Target greeter said he worried at first that the East Village store might close when he heard the company would soon occupy the larger Union Square location.

“But we probably won’t close here because we’re very busy,” he said of his place of employment, which is situated below pricey condos leased by Extell Development.

Back then, a part-time F.E. sales manager named Sophie Henderson told this reporter that she had been working at the upscale supermarket for 17 years. Henderson, then 60 and a widow, resigned without severance pay a day after the Food Emporium was sold to Key Food, saying she would be receiving her late husband’s Social Security benefits.